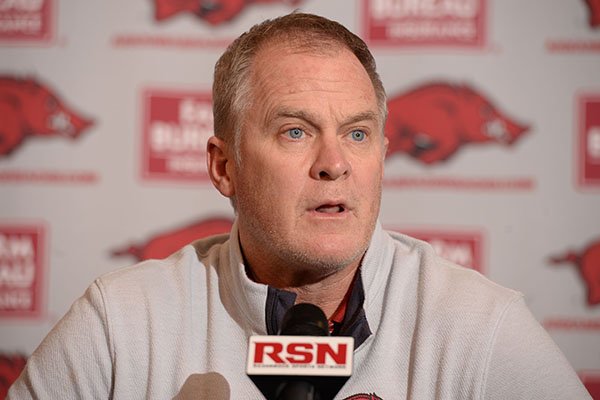 FAYETTEVILLE -- The University of Arkansas will not start spring football practices for at least another month after the SEC on Friday extended its suspension of organized athletic activities among its 14 member schools until April 15.

The newest measures from the SEC were a further response to the coronavirus pandemic that has brought sports to a virtual standstill worldwide.

Arkansas Athletic Director Hunter Yurachek, in a Friday news conference at the Broyles Athletic Center, stressed the gravity of the situation.

"Athletics is not important right now," Yurachek said. "What is important is a very serious public health issue, and we need to do our part in college athletics to help our country make sure that this coronavirus does not spread. That's what's important."

Previously, the SEC had suspended spring sports until at least March 30 and given its schools autonomy regarding practice scheduling in all sports, including football.

"That means absolutely no competition," Yurachek said. "No team practices. No team workouts. No individual workouts. Anything that has to do with being an athlete has been suspended within the Southeastern Conference."

Yurachek said the UA would continue to provide services to athletes for academic, medical and mental health support as well as meals at the Jones Center.

[Video not showing up above? Click here to watch » https://www.youtube.com/watch?v=tfd9ygyO2Xs]

All team meetings must take place before 5 p.m. on Monday. After that, students can make their own decisions on whether to remain on campus, stay in off-campus housing or return home.

"We'll send out a letter later today to the parents of our student-athletes that they make the decision for them and their family that they believe is in the best interest of the student," Yurachek said. "For some of our student-athletes, their best interests may be to stay here on campus in the residence halls or in their own apartments they may have off campus. But we want families to make that decision."

The Razorbacks were scheduled to open spring football practices under first-year Coach Sam Pittman on Monday. NCAA members are allowed 15 practices during the spring semester, so the extended suspension would not allow Arkansas to get in its full complement of practices before the end date for spring football on the current NCAA calendar.

"Without some type of waiver or some type of provision within our legislative body ... really we have to be done [with spring football] based on our academic calendar by the date April 25," Yurachek said. "That's not gonna happen.

"That will be one of the things we ask the NCAA as a conference for is some legislative relief. Whether that happens during the month of May or if there's some coaching that can take place in the summer that normally cannot happen in the sport of football, as well as for soccer and volleyball or other fall sports that normally would be preparing for their fall season this time of the year."

Pittman, who chatted with the pool of reporters at Wednesday's pro day in the Walker Pavilion, was not at the Friday news conference, but he provided a statement.

"These are unprecedented times that we are all dealing with right now and they continue to evolve," he said. "We want to make sure we are doing the right thing for the health and safety of our student-athletes and community. When we are allowed to return to team activities, we'll be ready to go with a plan to improve our football program, and until then we're focused on making sure everyone stays healthy."

Yurachek did not sound optimistic about whether spring sports such as baseball, softball, golf, tennis and track and field would reasonably be able to start back up. The NCAA nixed all championship events for winter and spring sports on Thursday, but conference championship competitions have not been canceled as of yet.

"As far as our spring sports and those championships, I think it's still very much up in the air, any decisions on how to proceed," he said. "I will tell you I think it will be extremely challenging for our student-athletes and our coaches after taking a month off to quickly start a season back up again.

"You've got to think just the timing of that, if we are able to start practicing again some time after April 15, how many weeks of preparation you need to get ready to start a season again. It's gonna be a challenge. Read into that what you will. We have a lot of challenges ahead of us, but that's still up in the air."

The NCAA's Division I Coordination Committee on Friday suggested that eligibility relief, or another year of eligibility, would be appropriate for athletes who participated in spring sports.

"I think that's something that's in discussion right now," Yurachek said. "There's a lot that goes into that. It's not just gaining another year of eligibility for your seniors. You've got juniors and sophomores and freshmen that have also lost potentially a season of eligibility.

"There are scholarship limit implications that go along with that. If you let your seniors come back and you've got incoming freshmen, you will obviously go over your roster and scholarship limits for many sports. So it's just not as simple as saying everyone gets a year back. There's a lot more discussion about the details, really, before you can say that's going to happen."

Yurachek said the last 72 hours have been incredibly challenging for all of college athletics and throughout the country.

The SEC will continue to maintain a daily conference call among its athletic directors for the foreseeable future, Yurachek said, because "this has been a fluid situation."

There are myriad issues that spring from the decisions to postpone or cancel athletic seasons, many of them financial, including refunding tickets and dealing with workers whose jobs revolve around athletic events.

Yurachek said information has been formulated to provide refunds or credits for events through the April 15 suspension date, and anything after that will be addressed as well.

The speed of news regarding the coronavirus continued at a rapid pace Friday, the day after the SEC canceled the rest of its men's basketball tournament in Nashville, Tenn.

On Thursday, the NCAA announced all winter and spring championships were canceled, catching conference offices and universities off guard.

Yurachek admitted in several interviews Friday that he was frustrated with the lack of communication the NCAA has provided since the crisis began escalating. He said he found out about the NCAA's decision after his plane returning from the men's basketball tournament had landed.

"I mean, we didn't have any opportunity as the membership of the NCAA to discuss that. I think we could have taken a step back as a membership and re-evaluated what we do with our spring sports. The same decision may have been reached. I don't think that decision needed to be reached yesterday."

Yurachek expounded on that view during his news conference later in the day.

"I was disappointed in not necessarily these were the incorrect decisions, but how those decisions were delivered," he said. "I know we are working in a very imperfect environment right now. An unprecedented environment.

"But ... I would have liked to have the opportunity to discuss the decisions with our coaches and then with our student-athletes. And they find out from the right means and not social media."