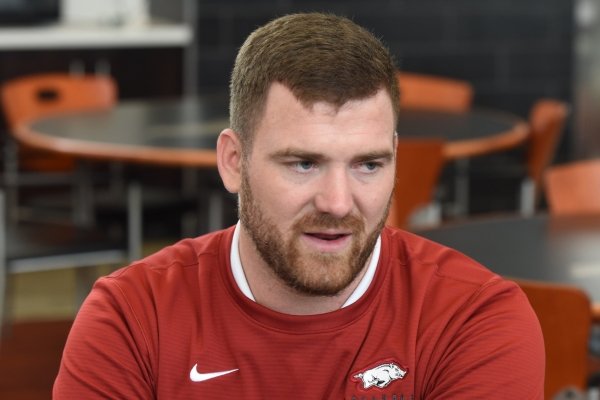 FAYETTEVILLE — When Arkansas next takes the practice field at a date to be determined later, new assistant coach Jon Cooper will have a limited amount of tight ends to work with.

They also have walk-ons in former Illinois State player Nathan Bax (6-4, 240) and Elkins’ Johnson Bowman (6-4, 240) already in the program while Bentonville West’s Jonas Higson (6-2, 220) has agreed to be a preferred walk-on next season.

All of those players have combined for just 3 catches for 15 yards, all by Henry, although Kern has seen over 100 snaps in his career and is considered a solid blocker.

“It really doesn’t bother me right now because I am excited about the ones I have,” Cooper said of his lack of numbers. “They are great workers. I have seen them in the weight room and they are hungry to be the best football players they can be.

“As a freshman, he got a chance to get on the field and get some experience that is completely invaluable,” said Cooper, who arrived from the University of Central Florida. “That’s game speed. You can say you practice at game speed, but nobody can really simulate that.

“He comes from a great family and has been well-coached and I am excited to get the chance to work with him.”

Toll was recruited as a defensive end, but did play tight end as well as quarterback for Hazen and had 14 catches for 170 yards and two touchdowns as a senior.

Arkansas signed Sutherland, who had been committed to UNLV, in the late signing period and is someone Cooper is high on.

“He is a really good football player already at 18 years old,” Cooper said. “He understands leverage, he understands pad level, he understands the demeanor of what this position really takes. He has got a prototypical SEC, NFL-type body. He is long, 6-4 1/2, probably closer to 6-5. He plays strong. You can tell in his legs, he’s got powerful legs, but he also has room to grow, too. I think his potential is really high.”

Sutherland caught 35 passes for 329 yards and eight touchdowns as a senior.

He had an earlier offer from Arkansas, but the Razorbacks had taken commitments from Allen Horace and Brandon Frazier under former coach Chad Morris.

“After the first signing period, recruiting resets and that is when it really picked up for him,” Cooper said. “He reached out to me (in early January) and told me that Arkansas was his dream school. We had a very candid conversation of just what our makeup looked like and not knowing who they had recruited beyond a couple kids.

“Those kids (Horace and Frazier) kind of had the right of first refusal which, right, wrong or indifferent, it was what is was because of the relationships that were built and the comfort level of people in the building, just knowing more about them.

“But we kind of stayed in touch a little bit over Twitter and text and he understood that he was kind of next on the list, not necessarily as a ranking, but you could only take so many and we were not going to not honor things.”

“We are going to do what we tell people and I think that is the right way to do things. I don’t think we should back out late and sit in somebody’s living room and tell them something that is not true.”

Sutherland’s recruiting would have likely taken over soon except for injuries, according to Cooper, a former Oklahoma offensive lineman and four-year NFL player with the Minnesota Vikings and Tennessee Titans.

He had offers in the early period from Arkansas, Florida State, New Mexico and others.

“Collin is a special player and he had an interesting recruiting process just with a couple of injuries and the timing of those, being in his junior year, being in the summer, so camps weren’t really something where he could go get some exposure, ” Cooper said.

“I think the old staff here had offered him and got the other two commitments, and that is how recruiting works. If he would have taken the Arkansas or the Florida State offer in the early period everybody else would have been saying, ‘Let’s get him.’”