Top 20 player drawn to Hogs because of ties 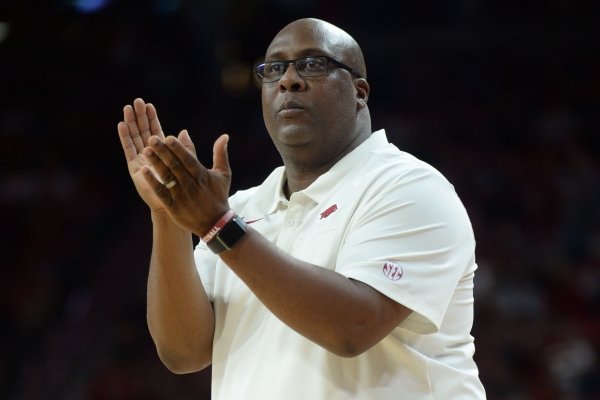 Arkansas assistant coach Corey Williams directs his players Friday, Nov. 22, 2019, during the second half of play against South Dakota in Bud Walton Arena in Fayetteville.

When ESPN Top 20 prospect Harrison Ingram made his unofficial visit to the University of Arkansas in August, he did so because of relationships.

His relationships with University of Arkansas assistant coach Corey Williams and co-SEC Player of the Year Mason Jones attracted him to Fayetteville, and he’s glad he made the trip.

“I’ll be honest, the only reason I was going to visit was because of Coach Williams and Mason, and then I went there and it just blew me away,” Ingram said. “I loved it.

“The coaching staff is so down-to-earth. It felt like I already knew Coach [Eric] Musselman, and really I never met him before. Coach Musselman’s nephew goes to my school, and I’m pretty good friends with him.”

ESPN rates Ingram a four-star prospect, the No. 4 small forward and No. 19 overall prospect in the Class of 2021.

Williams was the head coach at Stetson from 2013-19, and that’s where he met Ingram.

“I’ve been knowing him for a minute,” said Ingram, who plans to play for Southern Assault on the Adidas circuit. “Really, really long while. He was probably the first college coach I met besides George Lynch because I knew George Lynch because his son goes to my school.”

Ingram has known Jones for years.

“I’ve known Mason since I was a little kid because he played AAU with my brother,” Ingram said. “I’ve been in contact with Mason like every day.”

Jones has talked highly of his time at Arkansas, and he is urging Ingram to take an official visit to Fayetteville.

“He said it was the best choice for him to go to Arkansas and that they really changed him around,” Ingram said. “He wants me to come for an official visit and see for myself. He promised I wouldn’t be disappointed.”

Jones’ development into the player he is today is not a shock to Ingram.

“I’m not really surprised because I remember I worked out with him this summer,” Ingram said. “He’s probably the best shooter I’ve seen with my own eyes. It’s ridiculous how many shots he makes.

“I knew if the right people got their hands on him and he got in shape, he could be something really special.”

Arkansas is in a strong position to get one of his official visits.

“Maybe later on in the fall or the summer,” he said. “I’ll probably want to go to a football game or a basketball game. I’ll probably get to North Carolina and Arkansas for officials some time.”

The recent decision by the NCAA to not allow on- and off-campus visits because of the coronavirus pandemic has had no impact on Ingram.

“I actually didn’t have any visits. I more or less have visited the schools I have interest in except maybe one or two schools I haven’t visited yet,” Ingram said.