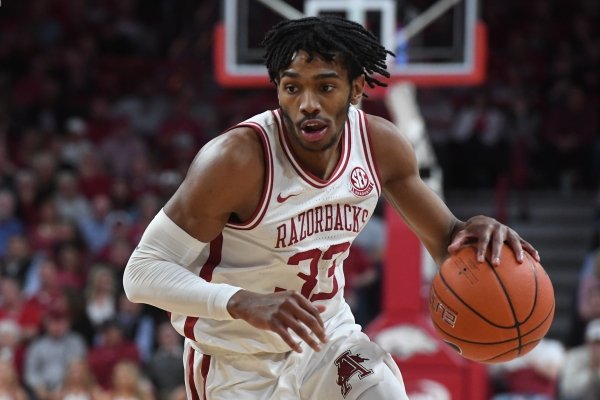 Arkansas' Jimmy Whitt is shown during a game against LSU on Wednesday, March 4, 2020, in Fayetteville.

FAYETTEVILLE — The Ides of March was to be a glorious day on the 2020 sports calendar. Selection Sunday was set for the hugely popular NCAA Men’s Basketball Tournament.

The tournament is canceled along with virtually every other event in all of sports for at least a few weeks due to concerns over the spread of the coronavirus.

Instead of March 15 being a beacon of opportunity and hope springing eternal, it is a gaping void for the millions of sports junkies across the nation and the globe.

In the classic five stages of grief, our athletes and sports administrators and even the sports media seem to be somewhere between denial and anger, the first two steps in the process. The suspensions and cancellations began just four days ago with the NBA.

The University of Arkansas has its stories of heartbreak and disappointment over the cancellations or postponements of competition.

UA Athletic Director Hunter Yurachek walked through the Jones Center on Friday chatting, consoling and counseling the athletes he encountered.

“They’re struggling, our student-athletes, not only here at the University of Arkansas, but across the country,” Yurachek said at his Friday afternoon news conference announcing the Razorbacks’ policy, in conjunction with all other SEC members, of essentially shutting down all practices and competition until at least April 15. He indicated how hard it will be to resume competition in spring sports after that date.

“I’m not sure as I walked around the Jones Center today, that it’s sunk in for most of our student-athletes yet, that realism that their careers, especially if you’re a senior, may have come to an abrupt ending. And that is the case if you’re in the sports of basketball or swimming or gymnastics. It may not be the case for our spring sports, but that’s yet to be determined.”

The heartbreak was evident in a sampling of social media posts from Arkansas coaches and athletes over the past few days.

Senior women’s basketball player Alexis Tolefree, whose team was a lock for the NCAA Tournament, wrote this message on her Twitter account, “I never thought that my chances of living my dream out, and playing in the NCAA tournament would just be taken away.

“It’s frustrating to know that’s how my senior year ended, but it’s all in Gods hands now. Thank you RazorbackNation for the endless support and cheer.”

Senior men’s basketball player Jimmy Whitt had received an invitation to the prestigious Portsmouth Invitational Tournament for prospective NBA Draft picks, but the event has been canceled.

Arkansas Coach Eric Musselman followed up by confirming the high honor it is to receive the invitation, and writing, “The PIT is just the start of something special. We are really proud of the year you had!”

The No. 18 Razorbacks gymnastics team had their senior night meet against Penn State canceled on Thursday, the eve of the final competition of the regular season.

“So devastated for all of the NCAA athletes whose seasons were cut short,” first-year gymnastics Coach Jordyn Wieber wrote on social media. “My heart goes out to every senior, especially [Jessica Yamzon and Hailey Garner], who have left their mark on Razorback gymnastics. We love you!”

Garner wrote replies on Twitter to many of the people who had reached out to express condolences to her, including Wieber.

“Thank you for this year, Jordyn! You have been so awesome to us and I am so thankful I got to experience this year with you guys!” Garner wrote.

Yamzon wrote a message on social media she called her “retirement post” that she had planned to release on senior night.

“It has been an honor and a pleasure to have been given the opportunity to meet so many amazing people that have shown their unconditional support of our program and me,” Yamzon wrote in part.

Arkansas men’s golfer Julian Perico put his thoughts on social media as well, writing: “Everyone is devastated. It is a sad day to be an athlete. We worked so hard for this time of the year, and now we can’t put any of our work into competition.

“But there is always a positive, always! We never have breaks, we are always being pushed toward excellence, we tend to forget our nature, what we actually are. What if, in the next couple months, we focus on being happy, on improving the things that we never have a chance to work on. Get to know ourselves a little better.

“Take the time to release some things that you have been holding up for a while. … I encourage everyone to try to set some goals and try to get better personally, mentally and just try to find things that aren’t available in our ‘normal’ lives.”

Freshman pitcher Blake Adams of Springdale expressed the thoughts of many athletes across the country when he posted on social media: “Dear Coronavirus, Thank you for taking away the passions of so many student athletes.”