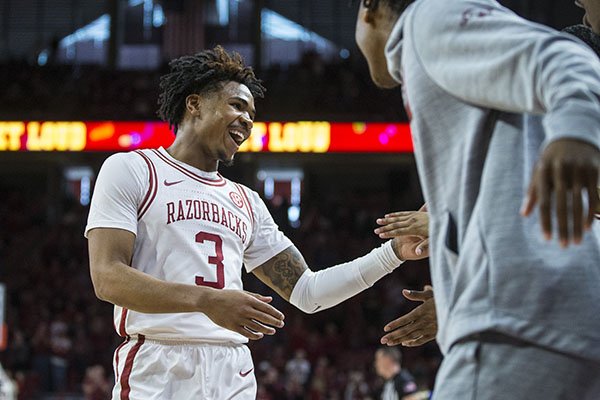 Arkansas guard Desi Sills is greeted by teammates during a game against Tulsa on Saturday, Dec. 14, 2019, in Fayetteville.

The first in a nine-part series reviewing Arkansas basketball in 2019-20.

• Closed the season strong again. No Arkansas player capped the 2018-19 season better than Desi Sills. He averaged nearly 10 points per game and shot 14 of 21 from 3-point range last March. Fans were optimistic he could carry a strong final push to close his freshman season into his sophomore year and become a key cog. He did improve in a number of areas, which I will get into below, but the Jonesboro native now has a reputation as a player who turns in his best ball late in the schedule. In 26 career games in February and March, Sills is averaging 9.3 points per game on 44 percent shooting. He has knocked down 46 of 91 3-point attempts in that span.

Sills scored 20-plus points three times as a sophomore, and he did so twice in Arkansas' last four games - career-high 21 at Georgia, 20 vs. Vanderbilt in the SEC Tournament. In the six games following Isaiah Joe's return from knee surgery (Feb. 22-March 11), Sills scored 13 or more points five times and shot 17 of 30 from deep. He hit a career-high five 3s against the Commodores and four against Missouri in Bud Walton Arena in one of his finer performances as a Razorback.

In the last three-plus weeks of the season, we were seeing Sills emerge as a pretty consistent third scoring option for Arkansas. When he was productive and efficient, the Razorbacks' offense reached another level. Like last season, Sills was hitting his groove as postseason play arrived. I hate that we did not get to see the rest of the season play out.

• Consistently fearless and tough. There is no such thing as half speed with Sills. He is all out all the time, and he has been since he arrived at Arkansas. That style of play can sometimes lead to bumps and bruises, cuts and inadvertent elbows to the head. In one conference game this season Sills was tripped as he attacked the lane, and his face met the knee of an opposing player before he hit the floor. Sills didn't stay down long, though. He knew he was coming out if he did, and he did not want to sit.

Sills' fearlessness early on this season was captivating. He wrapped up November 2 of 30 from 3-point range, but Eric Musselman could hardly keep him off the floor. Why? Because in that same month the sophomore led the team in scores at the rim with 23 on 32 attempts. He scored a team-high 46 times at the rim through January as well.

Without hesitation, he challenged the likes of Georgia Tech’s James Banks, who entered the Yellow Jackets’ meeting with Arkansas with 17 blocks in three games, and Western Kentucky’s Charles Bassey, who at the time ranked just outside the top 100 nationally in block rate, according to Ken Pom, and found success. Sills scored a career-high seven times at the rim against Northern Kentucky, too, in late November in a brilliant showing.

Many of the SEC's top shot blockers also took Sills' best shot in halfcourt settings and in transition. There was no one I envied less than the opposing player or players standing between Sills and the rim once he decided to attack. His top moment of the season, in my opinion, came Feb. 22 against Missouri when he scored over Tigers forward Kobe Brown in the lane. After the ball went through the net, Sills looked back in Brown's direction and gestured that the 6-7 freshman was too little. That is Sills in a nutshell.

• Adapted well to role off the bench. Sills was really, really good to end his freshman season after moving into the starting lineup. This year, his jump came after Musselman moved him into a sixth-man role. In the eight games in which he did not start as a sophomore, Sills averaged 14.4 points, shot 59.4 percent from the floor and was 20 of 36 from 3. Prior to the SEC Tournament, Musselman said he approached Sills about returning to the starting lineup, but Sills declined. He liked packing a punch as a reserve. And he did that against Vanderbilt in Nashville, Tenn., finishing with 20 points.

• Sills was Arkansas' best 3-point shooter in the corners. He made a team-high 13 in the left corner. His 17 corner 3s tied for the most on the team with Joe, but it took Joe 73 attempts to get there - 30 more than Sills.

• Played with a purpose. Prior to this season, on Arkansas' media day in September, I talked with Sills about his motivations entering the year. He opened up to me about dedicating his sophomore season to a friend who passed away following a car accident last fall. At a number of points throughout the season I would catch myself admiring the passion Sills played with, knowing that he was playing for more than just himself. During the Razorbacks' Stand Up To Cancer game against TCU in January, Sills wrote the name of one of his best friends - a survivor - on his card, which was shown on the video board in the arena.

• Could be an inefficient finisher in the lane. This really was not much of an issue until February. While Sills was finding his touch from 3-point range (16 of 33 from 3 on the left side of the floor in February), he struggled to capitalize around the rim, making 14 of 38 attempts in the lane and 12 of 30 in the restricted area.

He was 0 of 4 in the lane against Auburn, 0 of 6 at Tennessee and 0 of 3 at Florida. Those weren't his best games. For the season, Sills was 60 of 100 at the rim and 66 of 122 (54.1 percent) in the lane. Those percentages are a bit below the team mark of 64.3 and 59.2 percent, respectively. You have to love his determination in getting to the rim, but you also understand it is going to get him in trouble every now and then. He certainly took a few ill-advised shots.

• Streaky 3-point shooter and scorer. Sills has essentially been ice cold or red hot from 3 his entire college career, and there hasn't been much middle ground. He started his sophomore season by missing his first 17 attempts and 28 of 30 in November, and he closed it by knocking down 17 of 30 in the last six games. Sills has a chance to be a really special player if he can become a consistent perimeter threat.

• Shaky at the free throw line. As a guard, you have to make more than 65 percent of your free throws. That's the bottom line. He finished SEC play at 64.4 percent from the line. Improving in this area is probably high on the offseason to-do list.

• Turnovers and decision making. I wrote in Sills' season review last year that there were times it seemed like he couldn't not turn the ball over. According to KenPom analytics, Sills had a turnover rate of 28.4 percent as a freshman. That figure dipped to 13.9 percent as a sophomore all the while seeing the floor much more.

He still had his moments, though, with turnovers and silly mistakes. He would step on the sideline, get whistled for player-control fouls and throw the ball away at inopportune times. The turnover in the backcourt at Texas A&M on March 7 changed the complexion of the game, Musselman said at the time. I also thought Sills committed turnovers fairly regularly on entry feeds.

Best Sills quote: "One thing is for sure, shooters shoot and I’m going to keep on shooting. Eventually they’re going to fall." - Sills after finishing November 2 of 30 from 3-point range

Best quote on Sills: "One thing I told Reggie Perry, because he knows these kids well, I said, 'Was he ever a football player, because he just has that mentality, that toughness, that mentality like he probably played football in high school, too.' He's a tough character, a tough kid and a great competitor." - Mississippi State coach Ben Howland