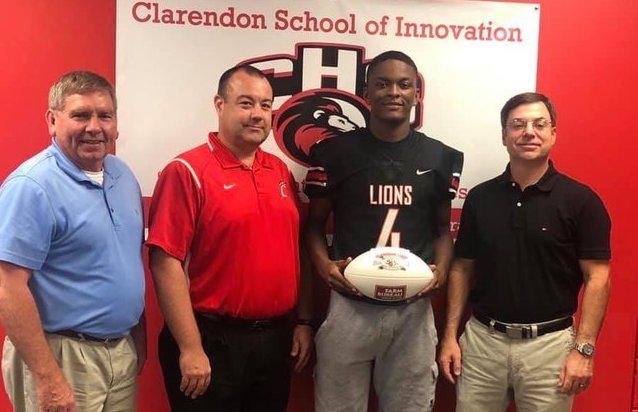 “It’s a blessing. It’s actually a dream come true,” said McAdoo, who started playing football in kindergarten. “I’ve been waiting on an offer from Arkansas since I was young.”

McAdoo, 6-2, 180 pounds, received his first offers from Florida State and Houston prior to his one from the Razorbacks. He recently visited LSU.

He waited on his mother, an Arkansas fan, to get home before he called Coach Sam Pittman and receivers coach Justin Stepp.

“She cried. She likes that I can stay at home and play for Arkansas,” McAdoo said. “She likes the idea.”

McAdoo said was named All-Conference and honorable mention All-State after recording 65 carries for 622 yards and 8 touchdowns along with 19 catches for 345 yards and 3 touchdowns on offense. He returned 10 kickoffs for 150 yards, and 6 punt returns for 106 yards and a touchdown.

Pittman and Stepp told him they wanted to get him on campus once the NCAA dead period is lifted. He might visit Texas A&M and another SEC school.

“I might visit Alabama. That’s another dream school,” he said.

The offer from Arkansas carries a little more weight than his previous offers.

“It was more special because my whole family is for Arkansas, and for them to see me play on TV, too, that’s a relief,” said McAdoo, who recorded 4.36 seconds in the 40 yard dash at the school.

He is the fifth in-state prospect to receive an offer from Arkansas.

The Hogs have also offered offensive linemen E'Marion Harris of Joe T. Robinson and Andrew Chamblee of Maumelle along with Little Rock Parkview running back James Jointer and Fayetteville receiver Isaiah Sategna in the 2022 class.