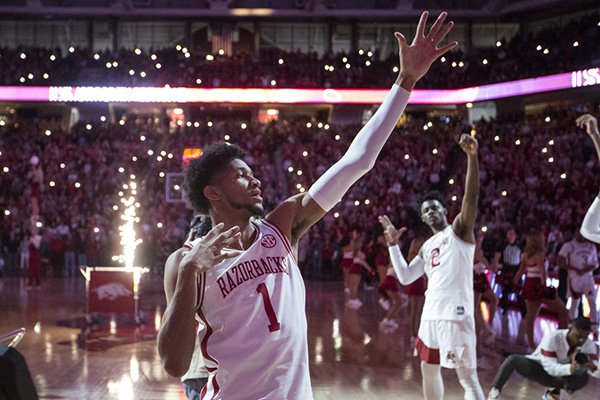 Arkansas guard Isaiah Joe (1) is shown prior to a game against Texas A&M on Saturday, Jan. 4, 2020, in Fayetteville.

The second in a nine-part series reviewing Arkansas basketball in 2019-20.

• Shot solid percentage from 3 as a high-volume attempt guy. Just to give you an idea of the rate at which Isaiah Joe let 3-pointers fly in his first season under Eric Musselman, the sophomore attempted two more 3s in 2019-20 than he did as a freshman, and he missed six games and played just 21 minutes in another - at Alabama - due to an injury to his right knee. And his season was cut at least two games short. Joe averaged 10.6 3-point attempts per game this season (10+ in 8 consecutive games from Nov. 25-Jan. 4), and his 275 attempts ranked No. 9 nationally and No. 1 among players in Power 5 leagues.

While it is true that Joe did not connect from deep at the same historic clip as his freshman season, which would have been unbelievably difficult, he still made 94 3s, and, again, missed six games. Those 94 triples are good for sixth most in a single season in program history. Not too bad. Joe was at his best from 3-point range on the left wing, where he hit 31 of 85 (36.5 percent) shots. He was also 30 of 83 (36.1 percent) on the right wing and a really solid 16 of 35 from the top of the key between the elbows.

• Did not miss a beat after returning from injury. Following a five-game absence stemming from arthroscopic surgery on his right knee on Feb. 4, Joe returned to the lineup and put up some impressive numbers to close the season. He played 37 minutes in his first game back, which was stunning, and scored 24 points on 5 of 10 from 3-point range. I have covered Joe's career going back to his sophomore year at Northside High School in Fort Smith, and I was speechless that day.

Joe wound up scoring in double figures in Arkansas' final six games, and 20-plus four times. He also pitched in 18 against Vanderbilt in the SEC Tournament in Nashville, Tenn. Joe averaged 20 points per game after his return and shot 35 percent from 3, including 5 of 9 from the top of the key and 9 of 23 on the right wing. Against the Tigers on Feb. 22, he knocked down a season-high five 3s from the right wing on six attempts.

He just looked fresh when he got back on the floor. We all wondered how he would respond after his operation. It's like the downtime the injury provided him was beneficial. Joe appeared to have a bit more snap in his crossover, and his handle was tight. He was his usual self on the defensive end, too, taking charges, tallying deflections, boxing out opposing forwards and tapping 50-50 rebounds to teammates. He even recorded five steals in his first three games back.

• Underrated defender. Much of the talk surrounding Joe in his first two seasons at Arkansas has been about his silky-smooth jumpshot. It's NBA caliber. He has also proven to be a pretty good defender, too. Despite missing five games in SEC play this season, I thought he had a case to land on the All-SEC defensive team. He finished the season with nearly 20 charges taken, played passing lanes well, displayed great anticipation quite often and did the little things it takes to win.

Arkansas allowed just .90 points per possession with Joe on the floor this season (1,684 possessions) and 1.01 PPP when he sat (424 possessions), according to HoopLens analytics. It is obviously not a perfect defensive measurement, but Joe averaged only 2.0 fouls committed per 40 minutes, according to KenPom, largely due to his length and solid lateral foot speed. He did not have to defend with his hands very often.

• Money at the line. Joe finished his sophomore season 89 percent at the free throw line, and wrapped up SEC play 43 of 45 - 95.6 percent, which is a school record in league games. After returning from injury, Joe made his final 34 free throws, including 12 of 12 against Tennessee and 8 of 8 against LSU.

• Showed a bit more of an in-between game. In his freshman season, Joe finished 35 of 85 on 2-point field goals and hit 17 jumpers inside the arc. This season he was 38 of 85, and 21 of the scores came outside the lane on either runners or midrange jumpers. He struggled a bit (7 of 27) on 2-point attempts left of the lane, but was 50 percent (14 of 28) on such shots in the middle of the floor - above the foul line between the elbows - and right of the lane.

• Struggled shooting corner 3s. After putting together Arkansas player shot charts following the first month of the season, I began to notice an odd and interesting trend: Joe just couldn't seem to find his touch in the corners. In November, he made 2 of 7 left-corner 3s and missed all 12 attempts in the right corner. In December, he went 1 of 9 and 2 of 9 from the left and right corners, respectively.

• Upper-body strength. According to Arkansas' official roster, Joe added 13 pounds between his freshman and sophomore year. It was absolutely necessary he add some weight to his frame and muscle to those long arms. He lacked the upper-body strength to get by defenders off the bounce with regularity as a freshman, so he worked in the offseason to fill out a bit. It did not happen as often this season as in 2018-19, but opponents were able to knock him off balance and off his track at times after putting the ball on the floor.

• Uncharacteristically missed open looks and momentum shots. Rarely can you say this about a player who knocked down 90-plus 3s in a season, but it's true. This is not to say Joe had a poor shooting year, because I don't think he did. He simply did not make quite a few shots we saw him hit the year before. Why? I'm not sure, but a few of those misses kind of stuck with me, and maybe you, too.

• Scoreless stretches. Joe was held without a point for 31 minutes, 21 seconds against Kentucky at home; 25 minutes, 15 seconds at Mississippi State; and 17 minutes, 39 seconds against South Carolina at home - all losses. He could disappear for portions of games when the Razorbacks needed his offense.

Best quote on Joe: "That's a legit stroke, probably the best in America." - Missouri coach Cuonzo Martin after Joe made 5 of 10 3s against the Tigers in his first game back from injury in late February