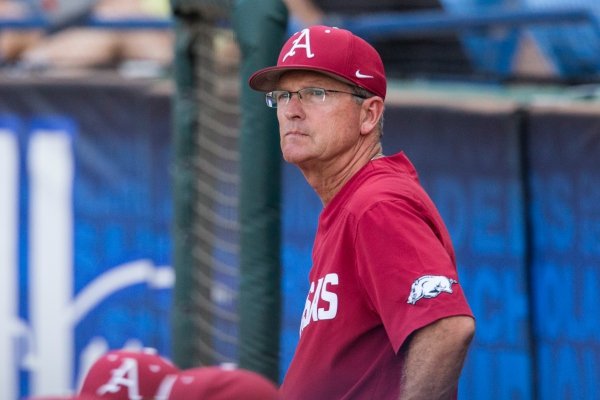 Dave Van Horn, Arkansas head coach, looks on in the 4th inning vs Georgia Thursday, May 23, 2019, during the SEC Baseball Tournament at Hoover Metropolitan Stadium in Hoover, Ala.

FAYETTEVILLE — Arkansas baseball coach Dave Van Horn normally has to put together somewhat of a jigsaw puzzle with the 11.7 scholarships the NCAA allows college baseball programs, but it is going to be even more challenging in 2021.

While it appears there could be some eligibility relief due to the coronavirus pandemic, Van Horn is in somewhat of a holding pattern.

“I don't think there's any panic on our end. I think most of the teams in the country that have been out working have guys lined up.”

The number of scholarships and money available may not be known for awhile.

“It slows us down for some of those younger guys, but really our main concern is trying to figure out our roster for this coming fall,” Van Horn said. “What are the new stipulations? What's going to go on with the scholarships? What's going to go on with (initial) counters and number we can have on the roster? Are we getting more scholarships? Is everybody going to get their year back?”

He offers up how younger players need the eligibility relief, not just the upperclassmen.

“I mean, how unfair would it be if you were a freshman and you had seven at-bats or two at-bats and you're starting to get to play now,” Van Horn said. “That’s what is going on. If you don't get this year back it doesn't make any sense. It shouldn't be just for seniors. It should be for everybody that is on the team.”

He is hopeful that the NCAA will allow more scholarships for a period of time.

“I would think that we will,” Van Horn said. “I just think it needs to be spread out over four years or a complete cycle where you could taper it down. For example if we got a certain amount in 2021 maybe we get a little bit less the next year and the next year then we're back to wherever we need to be 11.7. We need more than (that) anyway, but that's another story.”

He thinks there will be some conferences that vote against the relief for all, but not Power 5 leagues.

“With some of the other conferences when it comes to a vote they're maybe going to vote against it,” Van Horn said. “Hopefully the Power 5 will say, ‘You do what you want to do, we're going to do what we want to do.’ I think it's coming to that one day. That's my opinion.

“I think the NCAA should give us what we need to do to take care of the kids. This has been such a point of emphasis over the last three or four years- taking care of the student-athlete and doing everything for them.”

Van Horn feels like they have moved that way in many sports, but not for college baseball.

“As many rules that has been changed and as many things that has moved in that direction, so why would you not do it again?” Van Horn said. “If those other schools don't want to give more scholarships they don't have to. You know they can make their own choice there. They just need to do right by the student-athlete, because that's where everything has gone the last five years.”

SEC Commissioner Greg Sankey said during a teleconference Wednesday that the league office has been looking at new scholarship models.

“We started last summer looking at the overall scholarship model with a working group that continued through the year,” Sankey said. “Our plan is to introduce, for conversation, alternatives. One is maintaining the current approach, and that work goes on.

“I don’t think, off the cuff, the current circumstances change the substance of our review. It’s been a really good exercise by both our staff and our members who are involved. We look forward to sharing that with the members of our conference over the coming months.”

Van Horn also wonders how fall baseball will be handled.

“We've talked about that right when this went down,” Van Horn said. “Normally fall ball would get a 45-day window. We get approximately 28-29 practice days, so we would have to give them some full days off in there. We can play two outside scrimmage-type games, just two. I would like to see that maybe jump to six or eight. We don't have to play that many, but maybe have that option.

“I think it would give some of our guys an opportunity to see where they're at against outside competition. Maybe open some eyes of some of the other guys in the program that aren't getting to play. There's some things out there. I would like instead of 45-day window maybe we get another two weeks or three weeks in there and have that option.”

He hopes he can get the new Razorbacks into his program by August, if not earlier depending on what the Center for Disease Control and Prevention, the NCAA and the SEC come up with during the pandemic.

“You know in our case I would probably like to bring kids in if everything was cleared in August,” Van Horn said. “Maybe we could start working out. We could still get off the field around the same time late October, but have more practice in and get these guys going.

“There's so many unknowns now. I would love for everyone to come in the second session of summer school and we start practicing then, especially if there's not summer ball going on. We would love for it to happen, at least have the option to expand our fall practice.”

He hopes he can help the current Razorbacks once it is safe to return to the practice field.

“If we can practice with the kids, just for development sake with the younger guys, we want to work out and get them ready maybe for summer ball, and the older guys, or some of the guys that are going to be high draft choices and are going to sign, we’d like to help them get ready for their next step in baseball,” Van Horn said. “We’ll do whatever we can do. But if we’re cleared to practice and they can come back to campus.

“Now, I don’t know what it’s going to be in a couple weeks. We’ll just have to play that by ear, but we’re prepared to do that. That’s what we do this time of year. I mean, we work with kids and we try to get them ready for a game or summer ball or whatever the case may be.

“Most of our kids have gone home. We’ve been encouraged to try to get our kids back to their homes and some of them, for one reason or the other, either couldn’t get there right away or have stayed for a while or are going to stay until it’s 100 percent they need to get out of here. We’re just trying to keep track of them. Our biggest issue right now is just making sure these kids are finishing up their classes, staying on top of everything and don’t get themselves into a bind.”