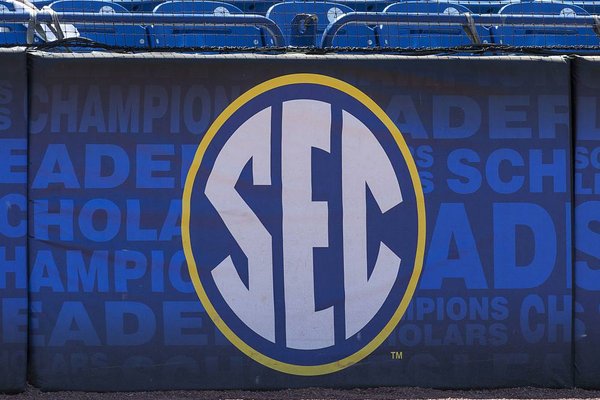 NWA Democrat-Gazette/BEN GOFF @NWABENGOFF Arkansas vs Ole Miss in game 6 Wednesday, May 22, 2019, during the SEC Baseball Tournament at the Hoover Metropolitan Stadium in Hoover, Ala.

FAYETTEVILLE -- The Southeastern Conference followed the lead of the NCAA and its sister conferences Tuesday by officially canceling competitions for the remainder of the spring season in all sports. The SEC also canceled spring football games for all 14 members and wiped out NFL pro scouting days on SEC campuses.

The latest step in an effort to control the spread of the coronavirus pandemic is part of a series of escalating suspensions and cancellations in the course of one week.

"This is a difficult day for all of us and I am especially disappointed for our student-athletes," SEC Commissioner Greg Sankey said in a statement. "The health and well-being of our entire conference community is an ongoing priority for the SEC as we continue to monitor developments and information about the COVID-19 virus."

The SEC announced that other athletics activities, including team and individual practices, meetings and other organized gatherings, whether required or voluntary, remain on suspension until at least April 15.

Arkansas Athletic Director Hunter Yurachek said Friday that the university had a plan in place to refund tickets for games through April 15 and that plans for refunds if games were canceled beyond that date would also take place.

The SEC worked through a series of steps in the last week, starting with a decision last Wednesday to hold the men's basketball tournament without spectators after the first-round games won by Georgia and Arkansas.

That changed the following day when the SEC canceled the remainder of the SEC Tournament.

The SEC originally imposed a suspension of games through March 30, then extended that to a halt on all athletic-related activities until April 15.

However, it became increasingly obvious the rest of the spring season was in jeopardy after the NCAA wiped out all national championship competitions in winter and spring sports on Thursday. The writing for the SEC appeared to be on the wall when one conference after another announced this week that its athletic seasons were coming to a close for the 2019-20 school year.

The decision on Tuesday ended the seasons for the Razorbacks in baseball, softball, men's and women's golf, and men's and women's tennis and it erased track and field on the eve of the NCAA Championships and before the outdoor season could begin.

The Razorbacks will not be able to defend their women's track and field national titles, their SEC men's golf championship and their baseball team's SEC West co-championship.

"While I am extremely disappointed for our student-athletes, coaches and our fans that the 2019-20 competitive seasons have officially come to an end, I believe the decision made today but the Southeastern Conference and its member institutions is in the best interest of all parties," Yurachek tweeted. "It has become readily apparent that with the current situation and what would be required to do so that any kind of resumption of competition would be highly unlikely.

"By making a final determination, we have enabled student-athletes to have closure related to the remainder of this season as well as move forward with the completion of the academic semester, preparation for future seasons or other opportunities that may await. As we officially close the chapter of the current athletics year, our focus turns to the future and our efforts to make the 2020-21 athletic year a special one for our student-athletes, coaches and Razorback fans."

The NCAA has said it will explore the idea of granting all spring season athletes an extra year of eligibility, which would permit current seniors to return for another season if they choose.

Yurachek said Friday that the issue of granting another year of eligibility is deep.

"There's a lot that goes into that," he said. "It's not just about gaining another year of eligibility for your seniors. You've got juniors and sophomores and freshmen that have also lost potentially a season of eligibility.

"There are scholarship limit implications that go along with that. If you let your seniors come back and you've got incoming freshmen, you will obviously go over your roster and scholarship limits for many sports. So it's just not as simple as saying everyone gets a year back. There's a lot more discussion about the details, really, before you can say that's going to happen."

The SEC announced that full refunds for tickets purchased for the SEC baseball tournament and SEC softball tournament through the league office or from an SEC school would be automatically refunded by March 31.

Arkansas baseball finished the season with an 11-5 record and a No. 14 ranking just before the start of SEC play.

The Razorbacks softball team was 19-6 with a 1-2 SEC record and a No. 20 ranking at the suspension of play.