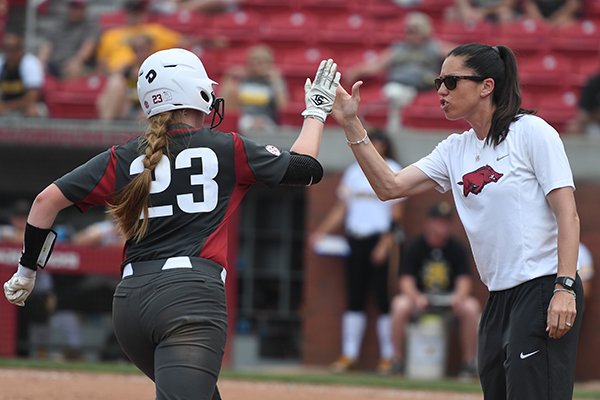 Courtney Deifel is slowly coming to grips with the reality that the college softball season is over before it even reached the halfway point.

The University of Arkansas softball coach told her team Tuesday by conference call that the season was done after the SEC canceled the remainder of the season, including championship events due to the threat of the coronavirus facing the country.

"They are resilient. They handled it very well," Deifel said of her team, which ended the season ranked No. 20. "There is obviously a ton of emotion involved. We've just tried to help them and support them through that. We're just trying to do our small part in the big picture."

In a sweeping announcement Tuesday, SEC Commissioner Greg Sanky said all spring sports would be canceled, including spring football and pro days.

"This is a difficult day for all of us, and I am especially disappointed for our student-athletes," Sankey said in a release by the SEC. "The health and well-being of our entire conference community is an ongoing priority for the SEC as we continue to monitor developments and information about the Covid-19 virus."

On Wednesday, Deifel and other Arkansas coaches of spring sports teams held a conference call with the media. The Razorbacks (19-6) ended the abbreviated season on a high note, sweeping a doubleheader from Kansas last Tuesday. Both games were decided on the final at-bat in 3-2 and 1-0 victories at Bogle Park in Fayetteville. Arkansas played just one SEC series, falling 2-1 at Alabama on March 6-8.

Deifel said about half of her team had returned to their homes as of Wednesday. She said not being with her team has been the biggest adjustment.

"When we made the conference call to announce the end of the season, the girls were saying they wish they could see everyone's faces," Deifel said. "I think that's the hardest part, not being around them. So moving forward we're going to find ways for us to stay connected and filling that void. They are 20 sisters and 20 best friends, so just finding ways for all of us to stay connected will help us move through this."

The NCAA is reportedly looking at granting players in spring sports an extra year of eligibility. The challenges if that were to be granted are numerous, not just for seniors, but for all players regardless of their classification, Deifel said.

"For all spring sports it will be curious to see how that's going to work moving forward," she said. "I think it's important that we look at every year. Seniors should not end their career that way, but we also need to look at the freshman class that still had 40 games ahead of them. I hope that it's given back to all of them.

"I think there are a lot of questions that still need to be answered, like how to do that. But I'm really optimistic and hopeful that they find a way that works for everyone. I still truly believe that they will get to play again. It's nice that they will have a choice. Now at least it's up to them."

Deifel also has had to make an adjustment to being at home at a time of year when she spends the majority of her time at the ballpark. Deifel and her husband have two young sons, ages 4 and 2, at home.

"There is a lot of Frozen II, and a lot of it is just trying to keep them from killing each other," she laughed. "I welcome the family time. I enjoy it. It's really weird, to be honest. It's really different because we've never had any softball player or baseball player to have time away from the sport at this time of the year. It's unchartered territory.

"For me, it's getting to stay at home with my boys and my husband and I'll take that on. That's fine with me. It's just really different. It's different trying to explain it to a 4-year-old. He doesn't know why we can't go to Bogle and see the girls. He's quite a Razorback fan across the board, so trying to explain that to him has been a little more challenging."