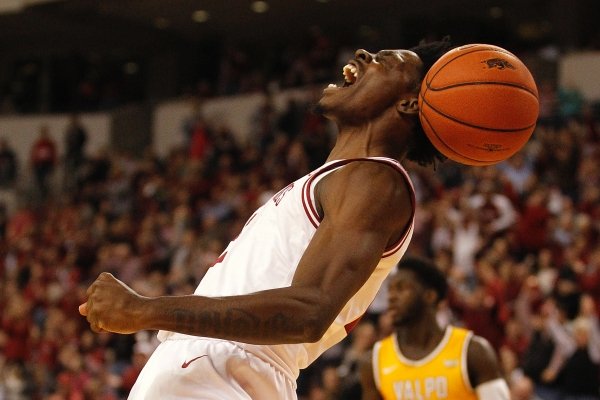 Arkansas’ Adrio Bailey (2) celebrates after a dunk during the first half of the Razorbacks' 72-68 win over Valparaiso on Saturday, Dec. 21, 2019, at Simmons Bank Arena in North Little Rock.

The third in a nine-part series reviewing Arkansas basketball in 2019-20.

• Defensive anchor. Adrio Bailey's senior season at Arkansas was unique to say the least. At 6-6, he primarily played the 4 in his first three years with the Razorbacks under former coach Mike Anderson, but he stepped into a new space in his lone season with Eric Musselman and was tasked with being an undersized 5. Bailey embraced that role, made it his own and was a key reason why this Arkansas group finished as the best in Musselman's college coaching career in terms of adjusted defensive efficiency (95.5), according to KenPom analytics.

From my perspective, it appeared Bailey completely bought in to Musselman's plan on the defensive end. His attention to detail was phenomenal. At one point this season, prior to the Razorbacks' game at Indiana on Dec. 29, Bailey owned the nation's top defensive rating - a measure of how many points a player allowed per 100 possessions he individually faced while on the court - at 74.6 thanks to his 21 steals and 20 blocked shots. Through the first two months of the season, he was turning away nearly 8 percent of opponents' 2-point field goal attempts, per KenPom.

By season's end, Bailey was No. 6 in SEC-only games in block rate (6.1 percent) and No. 19 in steal rate (2.3 percent). He finished with 45 blocks, 39 steals - both career highs - and posted a defensive rating of 92.1, the best figure on the team among rotation players. And according to HoopLens analytics, Arkansas allowed just .91 points per possession over 1,221 possessions when Bailey was in the lineup. He made a number of jaw-dropping blocks, and his rejection of Valparaiso guard Javon Freeman-Liberty in North Little Rock in December is the best block I have ever seen in person. He met an explosive guard at the top of the square, pinned the ball to the glass then corralled it with one arm. It was otherworldly, and Bailey at his best.

• Became a fairly effective 3-point shooter. This was one of the most interesting storylines to come out of this season. Bailey did not attempt a single 3-pointer through his sophomore season, and he made only 2 of 12 attempts in 2018-19. In those days, fans in Bud Walton Arena would groan if he even thought about pulling the trigger beyond the arc. By the middle of last month, Musselman was being asked - by me, anyway - if perhaps Bailey should be attempting more 3s. What a difference a year makes.

During Arkansas' five-game losing streak with Isaiah Joe sidelined, Bailey provided an unforeseen lift from the perimeter by knocking down 8 of 14 3s. He hit two 3s in three consecutive games in that span, too. He wrapped up the season 15 of 39 (38.5 percent) from distance, including 6 of 12 from the left wing and 4 of 7 on the right wing, according to shot chart data collected throughout the year.

• Energy and intensity. One of the best in recent memory in this regard. His efforts led to some big-time plays, and he knew how to play the crowd in those moments. That was one of my favorite things about him.

• Infectious personality. I plan to further highlight this point in a humanizing, in-depth profile in the coming days. On the Monday prior to Arkansas playing in the SEC Tournament, which turned out to be his final college game, I sat down with Bailey 1-on-1, and hands down it was the best interview I've ever done. It was more of a conversation, just me getting to know the man who happens to play basketball. We talked about a number of things that were near and dear to his heart, and he has a big heart. I asked him about his relationship with his father, Major, and brother, Major Jr., and what it was like when they got together after spending time apart. He let out a huge laugh that drew the attention of a few coaches and players who were still in the men's practice gym in the Basketball Performance Center.

You hardly ever caught Bailey when he wasn't smiling or having fun. In his next-to-last interview in a press conference setting, he told everyone in the room that he enjoyed the time he had spent with them. He thanked us as he exited the room. That is really rare. Sometimes players can simply go through the motions with media obligations, but Bailey didn't go that route. He was fun, full of life and so, so fun to cover. That is why I'm beyond pumped to be able to tell his story soon.

Musselman talked about Bailey's impact on the team before the season began. Shortly after arriving at Arkansas, he noticed that Bailey radiated a joy that rubbed off on teammates, even the ones who are a bit more on the serious side, and the coaching staff. If there were more Adrio Baileys in the world it would be a much, much better place.

• Midrange jumper. Anyone who has watched Arkansas basketball over the years knows Bailey could take inefficient 2-point jumpers. He made just 35 percent of 66 such attempts as a junior and was 8 of 22 on long 2s (within a couple of feet of the 3-point line), according to my shot chart data. Following the team's Red-White scrimmage in Barnhill Arena in October, Musselman said Bailey took a couple midrange jumpers that weren't in his wheelhouse.

For the most part, Musselman worked that out of his game this season. His shot selection, I believe, really improved, and he placed a little bit more of an emphasis on scoring around the rim (82 attempts at rim this season vs. 70 last season), but he would still launch a low-percentage jumpshot every so often. In 2019-20, he made 1 of 8 2-point jumpers left of the lane, 1 of 6 above the foul line between the elbows and 4 of 14 on the right side of the floor.

His first made 2-point jumper left of the lane did not come until Arkansas' 18th game of the season.

• Struggled at the line. Bailey did not shoot better than 65 percent at the free throw line in any of his four seasons at Arkansas, and he finished 35 of 67 as a senior - 15 of 34 (44.1 percent) in SEC play. Bailey made only 1 of 6 attempts in the Razorbacks' home loss to Kentucky on Jan. 18, which was the second game in a four-game stretch in which he went 5 of 16 from the stripe. He shot 7 of 20 in SEC home games.

• Foul prone. While Bailey was a solid interior defender for much of his final season, he did have a tendency to pick up some cheap fouls, which forced him to the bench. According to KenPom data, Bailey averaged 7.0 fouls committed per 40 minutes in conference games, the highest mark on the team among those who played at least 20 percent of available minutes.

For the season, that number sat at 5.8. Bailey fouled out of only three games in his first three seasons with the Razorbacks, but he was disqualified six times in 2019-20 - all in SEC play - and in three of his last six games.

Best quote on Bailey: "I’ve known Adrio since 9th grade, since I was fat kid in high school and Adrio was still my friend, so I’ve seen some incredible things Adrio did through high school and college. That block right there has to be in his top five, because that block led to so much momentum, the crowd jumped off of it and it was a big stop." - Mason Jones on Bailey's block that sealed the win over Valparaiso

Best Bailey quote: "When I seen (video of) it, I thought it was pretty cool. I didn't think it would be that, but yeah, it was pretty cool to look at. I guess it's just what I do. Coach Muss sent it to me. He was like, 'All your work is gradually catching up with you.' It means a lot." - Bailey six days after his big block against Valparaiso