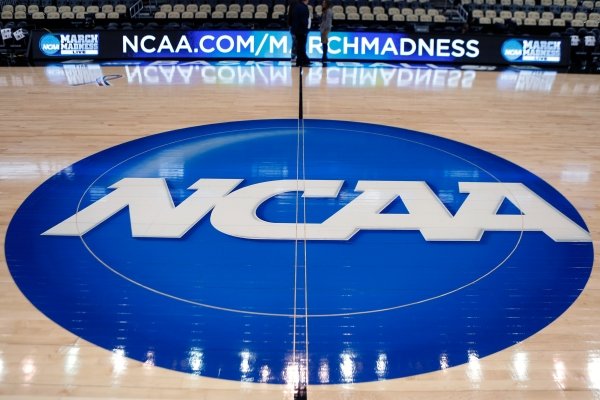 In this March 18, 2015, file photo, the NCAA logo is at center court as work continues at The Consol Energy Center in Pittsburgh, for the NCAA college basketball second and third round games.

When the NCAA transfer portal made it's debut on Oct. 15, 2018, it created another pool of talent for college coaches.

Verbalcommits.com reports 997 college basketball players entered the portal in 2019. Some believe the portal makes it more difficult for mid-level high school prospects to get recruited.

"As a Division I, mid-level, low-level coach, the things you probably want to do is say, 'Hey we're going to the portal and get someone that's proven or at least we feel like he's performed on this level before or higher level'," Real said. "A mid-level or low-level player coming out of high school, there's doubt."

Mills Coach Raymond Cooper said he believes the portal hurt the recruiting of former Comets forward Kevin Cross, who eventually signed with Nebraska in May. When reaching out to coaches about Cross, he found out quickly that coaches were focused on the portal.

"I actually had a couple of them tell me that we're thinking about going with a big as a transfer already to play," Cooper said.

Cross, 6-8, 240 pounds, averaged 18 points, 10 rebounds and 2 assists per game as a senior while being named to the Arkansas Democrat-Gazette All-Arkansas Preps second team. He played in all 32 of the Huskers' games and averaged 7.1 points, 3.9 rebounds and 18.3 minutes a game while starting 2 games.

He had minimal interest from colleges in December of his senior season.

"There was nobody looking at him, I mean nobody," Cooper sad. "He didn't even have any interest. I think Henderson State was the only one."

It's not unusual for some college coaches to not trust their own evaluations and wait until a prospect receives a scholarship offer before extending one.

"The biggest question they ask you is who else is recruiting him?" Cooper said. "Who else has offered? And he had no offers."

A contact of Cooper's sent film of Cross to Eastern Washington and soon the Eagles were Cross' first offer. Cooper sent more video out, and Oklahoma State eventually extended an offer.

"People were still leery because they asked who does he have an offer from," Cooper said. "Oklahoma State came in and offered him, and then it kind of opened up from there. I actually had colleges tell me they were looking for a guy that was more ready to play rather than taking a chance on somebody that may need a year of development."

Real, who's the head coach of Bartlett (Tenn.) High School believes Woodz Elite and unsigned Bryant senior point guard Treylon Payne is a prime example of a prospect being overlooked by bigger colleges.

"I think Treylon Payne is someone that's definitely being under recruited," Real said. "He can do it and I've seen him against high level guys."

More so than ever, college coaches have less time to produce a winning program.

"In the coaches defense, they're getting three, maybe four years to turn a program around," Real said "You start talking about a questionable kid you're not sure about, It's going to take you three years to know for sure and by that time they're about to get fired."

"This kid is already a qualifier and he has college life down pat," Hawkins said.

University of Arkansas Coach Eric Musselman was highly successful with transfers while at Nevada. He added five transfers to the Razorbacks roster this past season. Guard Jimmy Whitt started all 32 games and was the third leading scorer with 14 points a game after being a grad-transfer from SMU. Forward Jeantal Cylla, a graduate transfer from North Carolina-Wilmington, started one game and averaged 1 point and 1.4 rebounds a contest.

Center forward Connor Vanover, guard JD Notae and forward Abayomi Iyiola had to sit out this season and are expected to be eligible for 2020-21.

A good amount of players entering the portal are mid-major transfers looking to play in a Power 5 conference.

Ingram thinks most of the mid-major transfers should stay put.

"If they're playing well on the mid-major level their goal is they want to play on the high major level," Ingram said. "They're in a position where they'll spend an entire year sitting on the bench They're going to screw everything up and they were already in a good situation."

Jonesboro Coach Wes Swift believes some high school seniors may delay signing and wait and see which schools add transfers to the roster.

"I think we might not see as many seniors signing in the early signing period," Swift said. "It's more going to happen late once these transfers happen. I think the late signing period will become more important for some of these seniors as we move forward."

The amount of transfers leaving mid-major programs makes it tough for those coaches.

"I think it probably puts a strain on those schools more than anybody else, so I think they're constantly having to address their needs," Swift said.