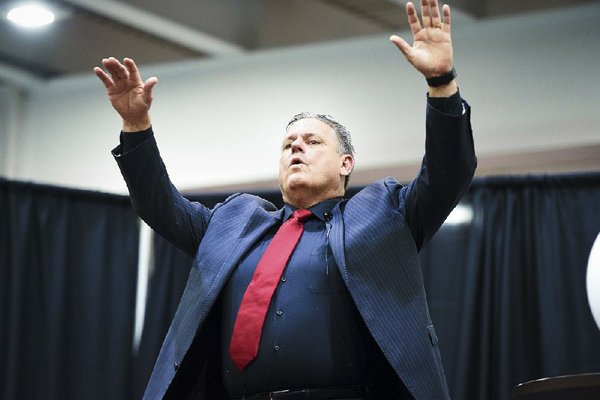 FAYETTEVILLE — Razorback head football coach Sam Pittman is working hard on Arkansas when it comes to recruiting, something his staff has been hard at this week despite the coronavirus pandemic.

Pittman and his staff have now offered eight in-state prospects - three in the 2021 class and five in the 2022 class - and he stressed that goes through him.

“Then if it’s further away than that, the position coach has the ability to make an offer. What we do is we sit in here and basically I rank the board that’s sitting behind me in the 2021 and the 2022 class.”

Pittman wants to be first to the table, but also be certain when it comes to in-state offers.

“We just don’t want to miss anybody in Arkansas,” Pittman said. “We want to be right when we offer them, so I feel like on those I have to be every bit a part of that offer. I have to be on all of them. But you don’t want an offer sitting out there for a week on a kid bordering our state and me haven’t watched the tape and they’re waiting on it and we’re getting behind.”

The Razorbacks have also offered several out-of-state sophomores lately and feel the fact that other schools soon offered them a good indication his staff is on the right path.

“We want to stay ahead of people, not behind,” Pittman said. “I think we offered like eight guys in the secondary or eight guys on defense, maybe Tuesday and maybe Wednesday. And there were other schools that followed suit right with us on the same eight people so hopefully people looking at us in recruiting and what we’re doing and that would be a compliment.”

Arkansas is in a dead period now, meaning no in-contact but coaches can still have dialogue with recruits.

It’s a good thing as Pittman noted when asked how the pandemic has changed things.

“Wooo,” Pittman said. “Well, all we know how to do is just go to work, you know. We have a plan of every day of what we’re going to do, and we know a bunch of it…is recruiting…Well, we’ve amped it up. I mean, we have more time, so you can either sit around and not do anything or you can recruit. And again, there’s a lot of ways to get out of where we are right now.

“Number one way is to recruit, and so I felt like that we were behind in 2022s. I thought we kind of caught up a little bit in ‘21s. So the last two, maybe three days -- Tuesday, Wednesday Thursday -- we made a big push for 2022 kids. And I would think y’all probably saw that. I don’t know how many we offered but quite a few in that class.”

Pittman said that his staff was going both old school and new school in the recruiting avenues that are allowed during a dead period.

Pittman says Arkansas hopes to still have football camps this summer, but that is a wait-and-see thing at this point.

“They are up in air,” Pittman said.  “We obviously have dates for them, but who knows. Who knows what's going on. We are in contact with the high school kids when this all breaks up come see us you know. They understand it too.”