Analysis: What happened when Arkansas put the ball in play 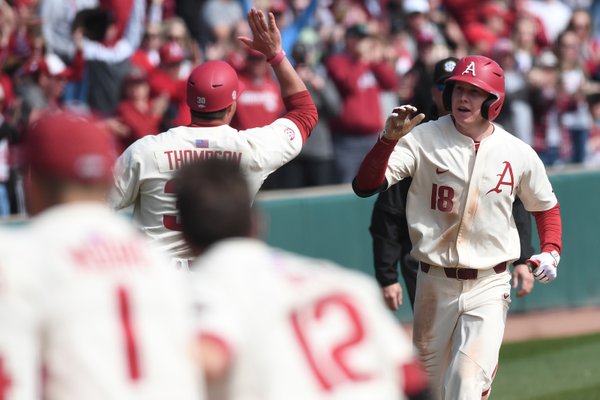 Arkansas' Heston Kjerstad gets met at home plate after hitting a home run in the bottom of the ninth inning to beat South Alabama Sunday March 8, 2020 at Baum-Walker Stadium in Fayetteville.

At the start of the baseball season I decided to keep up with Arkansas' batting average on balls put in play.

I thought it would give me a unique perspective on how much the Razorbacks strike out and who puts the ball in play most.

I planned on writing on this throughout the year, and was getting close to putting a story together on Heston Kjerstad's ridiculous start to the season when the season ended all too abruptly.

Therefore, it's time to take a look at the end-of-year results.

Let's start with Heston Kjerstad. The junior from Amarillo, Texas, started off the season hotter than anyone on the team. His 16-game hitting streak is impressive to say the least and he slashed .448/.513/.791 to finish the season. It's even more impressive when you look at the numbers.

Kjerstad struck out just nine times, the lowest number of any starter who started double digit games. He put the ball in play 57 total times this year, according to my chart. He recorded a hit on 30 of those 57 balls, which is good for a .526 batting average on balls in play.

There are 12 possible counts in which a player can put the ball in play, ranging from a 0-0 count to a 3-2 count. Some counts are going to have more balls put in play than others because of the nature of baseball. Every player starts off with a 0-0 count, so it makes sense that would be the most common count that a ball was put in play.

Kjerstad put the most balls in play on an empty count with 12, seven of which went for hits. Swinging at the first pitch makes sense for Kjerstad. There is a good possibility that it would be the best pitch he would see in an at-bat. What jumps out to me is how well Kjerstad hit when the count was not in his favor (0-1, 0-2 and 1-2).

It makes me sick to my stomach that we didn't get to see him complete his junior season.

Christian Franklin had the second-best batting average on the team among starters. He slashed .381/.467/.619, struck out 14 times and walked 10 times.

When you use a balls in play chart you can also see why pro scouts are drooling over Casey Martin, especially if he can get his strikeout numbers down. Martin led the team in strikeouts with 22, six ahead of second place Cole Austin, and he slashed .271/.386/.458.

Strikeouts aren't as big of a deal in the MLB anymore. Strikeout rates have increased from 6.52 per game in 2006 to 8.81 in 2019, according to Baseball Reference. Scouts care about what happens when players put the ball in play, and when Martin makes contact good things tend to happen.