Establishing 'culture': In a season filled with ups and downs, Musselman grateful for his first batch of Hogs 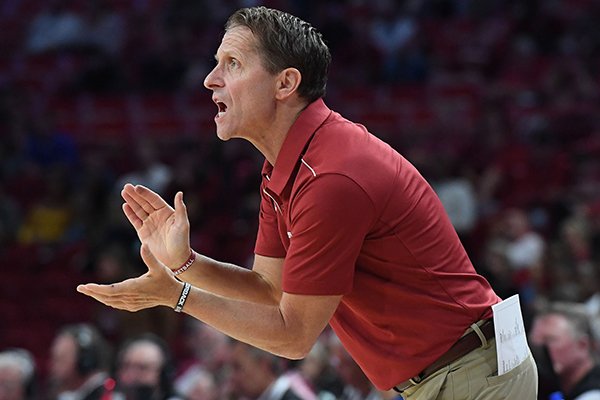 FAYETTEVILLE -- University of Arkansas Coach Eric Musselman got emotional when he addressed his players March 12 at the team hotel in Nashville, Tenn.

The Razorbacks were scheduled to play South Carolina that night in a second-round SEC Tournament game in Bridgestone Arena, and they were gathered for breakfast.

Instead of the Razorbacks continuing preparations for the Gamecocks, Musselman had to inform his team the rest of the SEC Tournament had been canceled.

He had just gotten the news from Arkansas Athletic Director Hunter Yurachek, who was meeting with SEC Commissioner Greg Sankey and other conference athletic directors.

Conference tournaments throughout the country were canceled, and the next day it was announced the NCAA Tournament and NIT had been canceled because of health concerns over the coronavirus pandemic.

"I thought we could win this tournament. I really did," Musselman told the Razorbacks in a video posted on the Arkansas basketball program's Twitter account. "In my heart and soul, we believed in you guys. We felt like we could win [against South Carolina] and then win the next day [against LSU]."

Musselman said he and Anthony Ruta, Arkansas' director of basketball operations, had been crunching the numbers and believed a victory over South Carolina might have been enough to gain an NCAA Tournament at-large bid.

That's when Musselman, on the video, began fighting back tears.

"I just feel bad for you guys," Musselman said, his voice cracking. "It's not fair. You guys, you sacrificed."

Musselman was hired as Arkansas' coach from Nevada in April after Mike Anderson was fired.

"You guys didn't choose me," Musselman said to start his talk to the Razorbacks. "I got hired, and you guys set a first-year culture, and all of our staff can't thank you enough."

The Razorbacks finished 20-12 with an 86-73 victory over Vanderbilt in their SEC Tournament opener.

"You guys played so hard, and it was a really, really successful year to win 20 games," Musselman said. "I think the biggest thing is you can walk out the door and say that you practiced hard every day, that you gave it your all in the games.

"And yeah, there were some games that we got discombobulated and didn't play as a unit or we didn't play as good as we could. But those are great life lessons, and they're also lessons for those that come back next year."

Musselman reflected on his talk to the Razorbacks when he was on a teleconference with media members late last week.

"When I first started giving the speech, it was kind of factual," Musselman said. "Then I started looking at guys and the shock in their faces, and started thinking back to the vision that we had sold and the goals that we had to come together as a group.

"It was probably without a question the hardest speech that I ever had to give a team."

The Razorbacks were 11-1 going into SEC play, including road victories at Indiana 71-64 when they rallied from an 11-point deficit in the second half, and at Georgia Tech 62-61 in overtime when junior guard Mason Jones banked in a last-second three-pointer.

The Razorbacks had been 0-7 in road games against Big Ten teams, including 0-2 at Indiana -- where they ended the previous season with a 63-60 loss in the NIT -- before beating the Hoosiers this year.

"It's a real big win," sophomore guard Isaiah Joe, who led the Razorbacks with 24 points at Indiana, said after the game. "To be able to bring this win back to Fayetteville, you have to cherish moments like these."

Arkansas opened SEC play 3-1, then had a rough stretch beginning with a 73-66 home loss to No. 10 Kentucky in which the Wildcats came back from a 47-44 deficit with 8:19 left after Coach John Calipari drew two technical fouls and was ejected.

"This one hurts," Musselman said after the game. "We had an incredible environment in the building. We don't want to let our fans down, and it's hard to create that atmosphere and get that atmosphere back. The locker room's hurting."

Arkansas endured a 2-8 stretch -- including a five-game losing streak when Joe was sidelined after undergoing arthroscopic surgery on his right knee -- to fall to 16-10 and 4-9 in the SEC.

The losing streak included the first back-to-back overtime losses in the program's 97 seasons -- 79-76 to No. 11 Auburn and 83-79 at Missouri -- as well as a 78-77 loss to Mississippi State on a last-second, tip-in basket. The Razorbacks also suffered their most-lopsided loss of the season, 82-61 at Tennessee, and lost at Florida 73-59 to run their road losing streak against the Gators to 13 games.

Joe returned and scored 21 points and 22 points, respectively, in home victories over Missouri 78-68 and Tennessee 86-69.

Arkansas finished 7-11 in SEC play and was 12-1 in nonconference games, including a 78-67 victory over TCU when Joe missed the game with knee swelling before the decision was made for him to undergo surgery.

The Razorbacks were 19-7 this season when Joe played.

"Every season has ups and downs," Musselman told his players in the UA video. "There are relationships that are up downs, teams go up and down, and you guys fought through it.

"It's been an awesome year. You guys set the foundation for us for how we want to play and what we want to be in the future."

Jones averaged 22.0 points to become the first Razorback to lead the SEC in scoring. He scored 30 or more points in nine games, including a career-high 41 against Tulsa, 40 against Auburn, 38 against Mississippi State, 37 against Tennessee and 36 against LSU. He also led Arkansas in rebounding (5.5), assists (3.4) and steals (1.6).

Fans chanted "M-V-P! M-V-P!" when Jones went to the free-throw line in the final seconds of Arkansas' victory over LSU in Walton Arena.

"It's just crazy to see the fans appreciate the way I've played," Jones said after the game. "For them to call me an MVP is amazing.

"Coming in this year, who would have ever thought that fans would start calling me MVP of the season, knowing that last year I was just a role player."

Jones was The Associated Press co-SEC player of the year with Mississippi State forward Reggie Perry, and he was voted to the All-SEC first team by the media and coaches. He also was an honorable mention AP All-American.

Senior guard Jimmy Whitt, a graduate transfer from SMU who began his career at Arkansas as a freshman, averaged 14.0 points and 5.1 rebounds. He was the only Razorback to start every game, and he averaged a team-high 37.0 minutes.

Desi Sills, a sophomore guard, averaged 10.6 points and 3.0 rebounds. He started most of the season, but came off the bench for the final six games and averaged 14.7 points in that span. He scored 20 points against Vanderbilt in the SEC Tournament when he hit 5 of 6 three-pointers.

Senior forward Adrio Bailey averaged career-highs of 6.3 points and 4.4 rebounds, and he led the Razorbacks with 45 blocked shots.

Ethan Henderson averaged 9.2 minutes in 20 games, but the sophomore forward came on late in the season. He started six of the last seven games, and he had 9 rebounds and 3 steals against Tennessee and 10 points and 6 rebounds against LSU.

Those numbers helped the Razorbacks offset being ranked No. 342 in rebounding margin at minus-6.8.

"I thought we played incredible basketball, with the exception maybe of the stretch when Isaiah was hurt."

Arkansas' only nonconference loss was 86-79 at Western Kentucky in overtime.

"When you think about a 30-plus game season ... you're going to have some bad games. But I thought as a whole, our guys laid the foundation of a group that really played hard and competed on a nightly basis."

Arkansas had an average paid attendance of 15,480 for 18 games in Walton Arena, including five sellouts.

"It motivates our players, it motivates our coaching staff to continue to try and connect with our fans in every way possible and to not take any of that for granted, because it's so unique," Musselman said. "Probably the greatest thing about this year is we know as a staff and our players know that if we play really, really hard, if we compete, our fans will come and support us with incredible enthusiasm.

"We could not feel more fortunate to be in that situation. Look, when you drive up to Bud Walton two hours before a game as a coach, you can feel the passion is going to be in that building. Whether it's a midweek game or whether it's a weekend game, I mean, I've never experienced anything like it from a whole season.

"Everyone can have one or two great crowds. But to do it night after night, it's really cool to be a part of it."