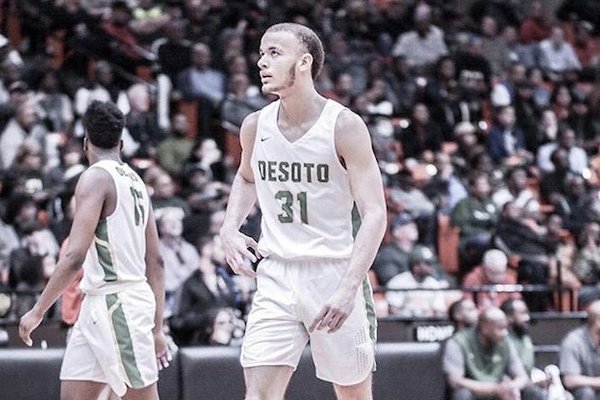 University of Arkansas 2021 basketball commitment Duncan Powell has found a second family in the form of the Arkansas fan base.

On March 10, he tweeted, "I love the support system all the Arkansas fans give me, really turns my bad days around 100. Love yall & cant wait to play for yall. #WPS"

"I've never seen a fan base like Arkansas," Powell said.

"They've been so supportive. I tweet, they're going to have a response. It's just crazy because I can have a bad day and I can literally tweet out, 'Arkansas fans, I had a bad day. What have ya'll been doing?' They'll lift me up and make me feel way better."

Powell, 6-7, 225 pounds, of DeSoto (Texas) chose the Hogs over scholarship offers from Ole Miss, SMU, St. Louis, TCU and Tulsa in September. ESPN rates him a four-star prospect, the No. 12 power forward in the nation and the No. 7 recruit in Texas.

The support from the fans is humbling.

"It really makes my day knowing I have like a second family in a different state," he said. "I'm automatically in their family."

He believes his faith helped him decide to become a Razorback.

"Without God, I would be nothing, and I'm more than thankful for the program God has put me in the position to be a part of," Powell said.

Powell averaged 21 points, 8 rebounds and 5 assists for the Eagles as a junior. He will play for the 17-under Arkansas-based Woodz Elite program on the Nike EYBL circuit. Being around Arkansans helped him decide to play with Woodz Elite.

"It made the most sense. It's a bunch of Arkansas guys," Powell said. "I feel like they'll have a real genuine care for me. I don't know why I would play for anybody else."

The chance to practice and play with Woodz Elite will have to wait. The first two sessions of he EYBL circuit in Indianapolis on April 17-19 and Atlanta on April 24-26 have been canceled because of the coronavirus pandemic.

"We had spring break last week, and I've been working out every day to get prepared for our first practice," Powell said. "And to have all of this and them cancel the first two sessions, it's really frustrating because of all the work I put in. Then from a positive perspective, I have more time to prepare when it does come back."

"We've been talking on a regular basis, just checking up on the season, checking up on each other," Powell said. "When the crazy virus stuff was going around, they checked up on me to make sure I'm good."

He and his father made an unofficial visit to Fayetteville 12 days before he pledged to the Hogs.

"When I was up there, it felt like home," Powell said. "The coaching staff kept it genuine."