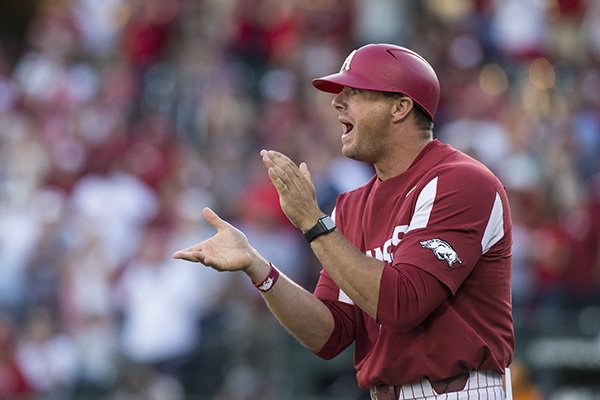 FAYETTEVILLE -- Nate Thompson's smile, prompted by a nice-sized bass in his hands on the edge of a pond, was nearly as broad as that of two of his daughters, Nevaeh and Natalie.

"No baseball. No school. Let's go catch the biggest fish in the pond!" Thompson wrote to accompany the picture on his Twitter account last week, noting one daughter hooked the fish and the other reeled it in.

Thompson, the University of Arkansas baseball team's hitting coach and recruiting coordinator, normally would never have time on a weekday afternoon in March to fish. The suspension of athletic activities by the SEC in an effort to slow the coronavirus pandemic made the fishing tale with his kids come to life.

There are many negative repercussions to the coronavirus issue -- financial, professional and otherwise -- but the increase in family time for many people across the nation is not one of them.

"I think everyone's communicating with loved ones right now much more than they were probably two weeks ago," UA men's basketball Coach Eric Musselman said Thursday. "And spending quality time with loved ones as well."

UA men's track Coach Chris Bucknam got a big kick out of a tweet posted by new Mississippi State football Coach Mike Leach, whose sense of humor could survive a lot worse than the coronavirus. The tweet reflected the tremendous amount of hours coaches spend in the office or otherwise working, recruiting or traveling.

Leach posted a message early last week that read: "Day 2 without sports. Found a lady sitting on my couch. Apparently she's my wife. She seems nice."

Said Bucknam: "I have to tell you that tweet from Mike Leach was a riot a couple of days ago. I just thought that was hilarious."

Bucknam said he and his wife Cindy are spending more time together.

"We've been married 39 years, and she says: 'It's only been nine really, because of all the time we missed and that's why we're so happily married.' I'm going to use the opportunity to rest and enjoy time with my wife and hopefully this thing blows over soon."

UA football Coach Sam Pittman and his staff attacked recruiting during the last week, which would have contained the first three of 15 spring football practices. Only on Friday did the staff not have a scheduled morning meeting and worked from their houses instead.

This coming week, Pittman said, the coaching staff will take some downtime as part of the school's spring break. He noted the temperatures are supposed to spike into the mid-70s during the middle of the week, so he and his wife Jamie plan to create a tropical attitude at home.

"It's supposed to be 75, 76, 76 on Tuesday, Wednesday, Thursday, so we're going to the Bahamas at my address in Fayetteville, Arkansas," Pittman said. "I think I'm going to heat the pool up, to be honest with you.

"There might be a whale sighting out there. It's just me, nobody shoot. It's just me. I'm going to have a good time. We're not leaving town."

Her son Trip approached her with a pressing issue while Deifel was responding, ironically, to a question about what she was doing during her free time.

"There's a lot of Frozen 2," she had said earlier. "I don't know if you can hear that in the background. We've got a 4-year-old and a 2-year-old boy who love Frozen, as all the other kids do.

"It's a lot of just trying to keep them from killing each other and just finding different things to do every day. But I welcome the family time and just enjoy it."

The unexpected downtime for the bat and ball sports, which were just getting into conference play, is particularly strange.

"It's uncharted territory," Deifel said. "For me, it's getting to spend time at home with my boys and my husband [Joe], and I'll take that on. That's fine with me."

"Talk about a place of isolation," Harter said. "It's my wife and I, so I don't have to worry about coming across anybody with this new bug. Yes, I'll be spending a lot of time out there."

Harter, asked what he'd do with his extra time, made note that in all his years of coaching there never had been an occurrence comparable to this.

"So ... in my mind it's almost like a premature retirement," he said. "I'm not going to handle that process well either. So my wife is trying to ground me. That's been a difficult process trying to escape the house periodically.

"The farm is probably a place that I can go out and stay mentally occupied and physically occupied. Then hopefully on my birthday -- April 15th -- the kids will be able to come back and the facilities will open back up. Hopefully this virus will run its course and move on to extinction."

Baseball Coach Dave Van Horn said the sudden halt to the season, when the Razorbacks were on the brink of leaving to board a plane for their first SEC series of the year at Mississippi State, has been jarring.

"It's pretty much seven days a week for them at this time of year," Van Horn said. "The camaraderie of your locker room and just being around everybody, it's just kind of a way of life. I don't really see it as a job. I think they feel the same way. This is a way of life for them.

"A lot of them will go play pro ball for a long time and then move on and do something else. A lot of them get into coaching. But that's probably the thing, you talk to any athlete about what they miss, it's the locker room and being around the guys and just the whole atmosphere and the camaraderie.

"We've got a good locker room. Guys want to be there. So for me personally, I miss it already. I can imagine that's what they're going through as well."

Musselman, who is a chronic social media sharer with his wife, Danyelle, filmed and posted three videos last week. One was a mock news conference in which he pretended to be engaging with media personalities from around the state, calling them by name and poking fun along the way. At the end of the video, the camera turned to an empty interview room to the sound of crickets.

Another was a mock pre-game entry onto the court at Walton Arena; game action where he calls out the name of players and acts out getting a technical foul; halftime talk; and post-game reactions, all with no one in the arena.

Musselman said he and Danyelle just aim to enjoy their social media interactions.

"She's the brains behind everything, and she likes to have fun," he said. "When you do some of the stuff that we do, you open yourself up to some vulnerability. And she encourages it. There would probably be a lot of wives that would say, 'Hey, don't do that, you're making yourself look like, you know, whatever.' But she's right along with it.

On a more serious note, Musselman said he and his staff are drilling down hard on some areas that should help the 2020-21 team.

"We want to try to improve in all facets," he said. "And obviously as we look to the future, like the way we play pick and roll with [7-3] Connor Vanover is going to have to change. We're not going to switch pick and rolls like we did with Adrio [Bailey], where he's our five man then ends up guarding a guard.

"So we're going to have to study, and that's our project right now is studying NBA 7-footers and how teams -- particularly the Milwaukee Bucks -- trap their pick and rolls."

Musselman also has been at home more than normal for this time of year, and he's helped Danyelle keep their daughter, Mariah, on top of her schoolwork.

"I'm not really good in math or reading, but I am good at discipline," he said. "So Danyelle does all the teaching, and then I come in when the focus gets lost a little and try to redirect her. So it's kind of a dual partnership in this home-schooling.

"I will say in all seriousness, people who have home school, wow! What an incredible ... I mean, I marvel at people that can do it, because it does ... change your relationship at home, how much you're with your child."