Where Are They Now: Jannero Pargo 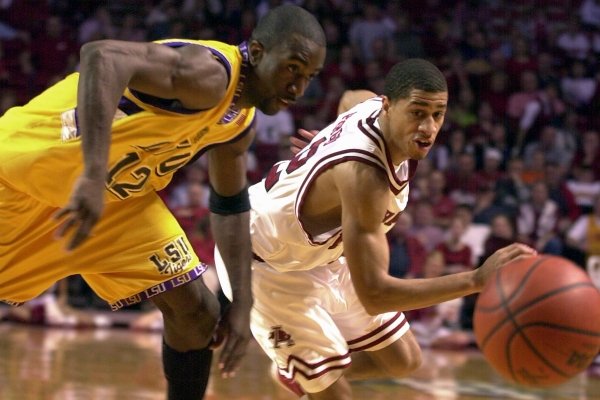 Jannero Pargo admits the notion of one day coaching never entered his mind, until late in his playing career.

Between 2013 and 2015, the former Razorback was in Charlotte, where his head coach was Steve Clifford, now Orlando’s head coach who first planted that seed.

“He leaned on me about things that we did out there on the court,” Pargo said. “He asked me if I wanted to coach? I said no. He was like ‘Why don’t you think about it, I think you’ll be a great coach.’ I started to be more vocal on the sideline with Kemba (Walker) and the rest of the team, and just challenged myself to be a voice. Just started from there.”

Between 2002 and 2017, he played for seven NBA teams, had a stint abroad, in the ABA and the NBA G-League. His final season as a player was in 2016-17 when he played for the Thunder’s G-League affiliate, the OKC Blue. Just months after retiring, he landed his first coaching gig, with the G-League’s Windy City Bulls, in September 2017.

Pargo spent two seasons with the Bulls’ affiliate before being hired by Portland in July 2019.

“You learn. I didn’t know much about coaching other than telling guys what to do,” he admitted. “I didn’t realize the work that goes in behind it. I got a taste of that my first two years and now I’m walking around with a laptop to go coach guys.”

His head coach with the Trailblazers is Terry Stotts, Portland’s boss since 2012, the NBA’s fourth longest-tenured coach with the same team. Pargo’s impressive resume was one reason Stotts hired him, but he’s been equally impressed with Pargo’s work ethic.

“(He brings) good experience,” Stotts said. “He’s played for a lot of different teams, a lot of different coaches. The fact he was in the G-League two years meant a lot to me because it’s a good proving ground, a good testing ground. He’s got a great personality. The players respect him as a basketball person, not just an ex-player. And he brings a lot of good ideas from a recent player’s perspective.”

Being an NBA assistant is of course a full-time endeavor, but that doesn’t preclude Pargo from keeping up with the goings-on back in Fayetteville.

In fact, as someone who has both played in the Association and now coaches there, he’s a big fan of the Razorbacks hiring former NBA head coach Eric Musselman.

“I love it. I don’t know him at all, but I thought he did a great job at Nevada,” Pargo said. “The pro-style offense I love. I think it’ll be great for recruiting, finally bring in some big-time players that have dreams of playing in the NBA and running a system that’s conducive. They can get those guys prepared for the next level.”

He hasn’t returned to UA in a while but would love to if his schedule permits.

Pargo played two seasons for UA, 2000-01 and 2001-02, putting him at the tail end of the Nolan Richardson era. And as someone who played for the legendary former Razorback coach who led the Hogs to the 1994 NCAA championship, he considers the court at Bud Walton Arena being named for Richardson an honor that is long overdue. “It’s a cool thing, well deserved. Brought a championship to the city, to the town,” he said. “He’s an iconic figure up there on the Hill and I think it’s well-deserved.”

Speaking of Bud Walton Arena, that was the site of his most memorable game as a Razorback, the 94-92 overtime win over No. 4 Florida on January 26, 2002. Pargo scored a game-high 35 points in 32 minutes, including a game-winning pull-up jumper with 2.7 seconds remaining in overtime.

“When we beat Florida, I think Florida was fifth in the country. We beat them and the fans rushed the court,” Pargo said. “That was a good moment. But for me, it (my favorite memories) is just (playing with) Brandon Dean, Teddy Gipson, Joe Johnson, guys that I’m still friends with today. Brandon Dean will be here at the game tonight. He lives in Dallas. Just friendships that last a lifetime.”

He and Joe Johnson were also teammates in the Big 3 and he loves still seeing his good friend and former teammate playing the game he loves.

“We’re brothers, him, myself, Teddy Gipson, Brandon Dean. To see Joe do what he’s doing now is remarkable,” Pargo said. “He’s in great shape. Hopefully, he gets another opportunity (in the NBA) here pretty soon, but if he doesn’t, he’s had a great career. (He) will probably continue to play in the Big 3, just loves the game. I’m just happy he’s healthy and able to get out there.”

After going undrafted in 2002, he landed in Los Angeles with the Lakers and played in the ABA before playing for Toronto, Chicago and New Orleans. Then came a stint in Russia and Greece. Pargo then returned to the NBA, playing twice for Atlanta and for Washington and Charlotte.

Since he’s less than three years removed from his playing days, he can still relate to today’s player better than his fellow coaches who have been coaching for a while. And him being a great “bridge guy” between the roster and the coaching staff was one reason Portland hired him this summer.

“It’s just thinking like a coach opposed to thinking like a player. That’s also one of the things that helped me get the job (in Portland),” Pargo said. “Now I’m able to relate to the players on this team. I’m the guy who bridges the gap between player and coach. It’s been working well for me so far.”

Some former players enter coaching because they want to pay forward all the sage advice they received throughout their career from veteran players and in turn pass that knowledge along to the current generation of players.

However, that’s not the case with Pargo. But he is someone with such a wide breadth of experience that everywhere he played and coached has provided him with ample lessons and knowledge to pass along to this next generation.

“It’s a little bit because I didn’t get that (sage advice). You got guys so focused on being great themselves, trying to get playing time and provide for their families that unless you get lucky enough to get a guy that’s 37 and he’s been there and done that and coach will leave you alone, you don’t really get that,” he said. “I didn’t get that and there weren’t six or seven coaches around (like in today’s NBA) to coach the guys at the end of the bench either. So, for me, it’s helping those guys at the end of the bench more so than the starters. I can relate to all of them, but the 12th-16th guys, I can help those guys out the most.”

During his two years at Arkansas, his 16 professional seasons as a player and his two-plus years in coaching, Jannero Pargo has always done the Razorbacks proud, something he continues to do in his latest endeavor, an assistant coach for the NBA’s Portland Trailblazers.

Stephen Hunt is a free-lance writer in Dallas. This story was originally published in Hawgs Illustrated