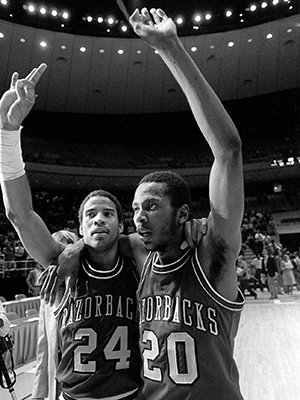 Hopes and expectations were flying high when the University of Arkansas started basketball practice for the 1981-82 season.

Eddie Sutton had four starters back from a team that went 24-8 and 13-3 in Southwest Conference play the previous season, winning both the regular-season title and conference tournament. Thanks in large part to the half-court shot by U.S. Reed, the Razorbacks advanced to the Sweet Sixteen before LSU beat them in New Orleans.

Joining returning starters Darrell Walker, Scott Hastings, Keith Peterson and Tony Brown the next season was Brad Friess, who had started as a sophomore in 1980-81.

Those were the days when Barnhill Arena became known as Barnhell.

It also was the start of the short-lived but intense rivalry between Arkansas and Houston.

They split during the regular season, with each winning at home. The Razorbacks won the tiebreaker, and SWC Tournament title, 85-69.

Arkansas was awarded a No. 4 seed and first-round bye, and Houston a No. 6 seed, in the Midwest Regional of the NCAA Tournament, which had 48 teams.

The Razorbacks were upset by No. 5 seed Kansas State, 65-64, in the second round. Houston beat Alcorn State handily, then downed Tulsa 66-64 to advance to the Sweet Sixteen in St. Louis.

No sooner had I returned home from Dallas than my former boss, the late John Robert Starr, suggested I follow the Cougars.

It was too late to get credentials through the NCAA, but when a team advanced, its sports information director gave the next site a list of reporters.

Houston sports information director Frank Schultz said he would add me. I caught him 15 minutes before he turned in the list.

The night before the first game, a bunch of sports writers and Schultz ate dinner at Stan Musial and Biggie’s restaurant. As we entered the door, a voice from a side room called out: “Got a hot seat for a cold butt.”

It was Stan the Man announcing they had room for one in their poker game.

Someone asked what the stakes were, and he said, “25”. I’d played lots of poker with a quarter limit, but I decided to just eat when he added, “dollars.”

Houston beat Missouri and Boston College to advance to the Final Four. They almost did so without Hakeem Olajuwon, who never had heard of the NCAA Tournament and turned in his uniform after the SWC Tournament.

Of course, the raw but talented freshman from Nigeria was found.

In New Orleans, the Cougars faced No. 1 seed North Carolina. The Tar Heels won 68-63 for the right to face Georgetown, which beat Louisville.

The phrase “Hoya Paranoia” was coined at this time because Georgetown did not stay in the assigned hotel, opting to stay in Biloxi, Miss., to prevent disruptions.

“They will have plenty of opportunities to see New Orleans during their lives,” Coach John Thompson said.

Less than an hour before the game, your scribe felt a tap on the shoulder while outside the press room.

It was North Carolina coach Dean Smith, and he needed my help. He needed a light for his cigarette.

It was a short smoke break because other reporters saw him. He stomped out his cigarette with his foot, said thanks, and took off.

The game was great. With 17 seconds to play, freshman Michael Jordan hit a jump shot to put the Tar Heels in front 63-62.

It was Smith’s first national championship, and mine, too. And it was the last time a smoke was shared with Dean Smith.