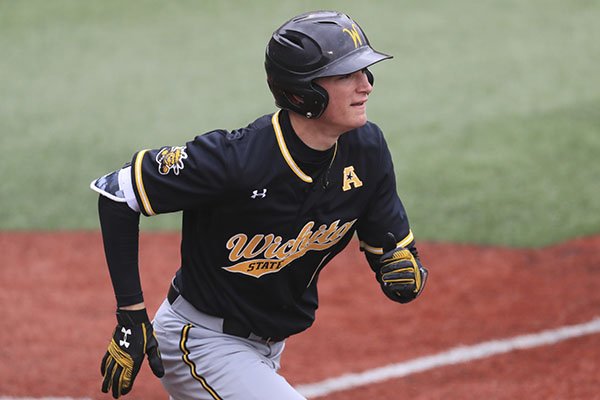 FAYETTEVILLE — One of the nation’s top junior college hitters announced Tuesday he will transfer to Arkansas.

Brady Slavens was batting .507 with an NJCAA-leading 14 home runs and 47 RBI through 22 games this season at Johnson County (Kan.) Community College. Slavens, who bats left handed, also had nine doubles and two triples.

Slavens (6-2, 185 pounds) played in the outfield as a freshman at Wichita State in 2019 before working out at shortstop for the Shockers last fall. He transferred at the end of the fall semester and played third base in junior college, fielding .854 with six errors.

Perfect Game rated him the top shortstop in Kansas out of Olathe Northwest High School near Kansas City. The Razorbacks recruited him in high school.

It is unclear whether Slavens will classify as a sophomore or junior at Arkansas in 2021. The NCAA has yet to decide whether spring athletes in Division I sports will receive an extra year of eligibility because of the shortened season, and how shortened seasons will affect athletes transferring from junior college.

The NCAA granted a blanket year of eligibility last week to all spring athletes in Division II. Its decision on Division I is expected next week.

By playing in junior college this year, Slavens is also eligible for the 2020 MLB Draft.

Slavens was on pace for an All-America campaign when his team’s season was suspended due to coronavirus on March 12. Johnson County (20-3) was ranked ninth nationally at the time.

Slavens’ monster JUCO year came after a modest freshman season at Wichita State. He batted .218 for the Shockers with four doubles, a home run and 23 RBI in 46 games, including 38 starts, mostly in left field.

The highlight of his freshman season came in Wichita State’s final victory of 2019, over top-seeded East Carolina at the American Athletic Conference Tournament. Slavens hit a three-run home run in the top of the ninth inning to extend a one-run lead to four.

Slavens is the second former Wichita State player to transfer to Arkansas since Todd Butler - a former Razorback assistant coach to Dave Van Horn - was fired as the Shockers’ head coach following the 2019 season. Butler is now an assistant coach at Missouri.