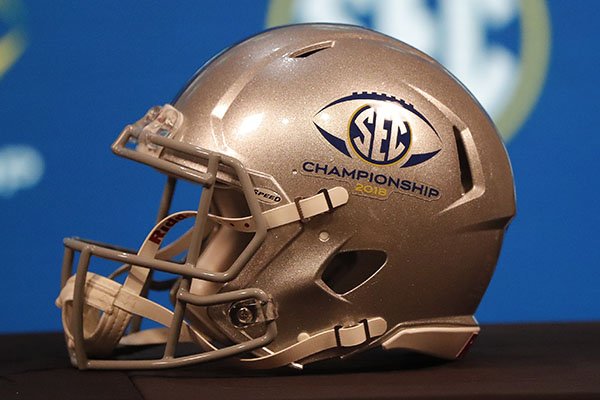 LITTLE ROCK — Scanning the SEC football grid for angles involving the schedule, it is obvious CBS executives shouldn’t need more than 10 minutes to decide the network doubleheaders will be Oct. 10 and Nov. 21.

Only the six teams expected to be the league’s best — West Division favorites Alabama and LSU, their East Division counterparts Florida and Georgia, and West contenders Auburn and Texas A&M — are involved in the four games on those dates.

In October, Auburn is at Georgia and LSU is at Florida; six weeks later, LSU is at Auburn and A&M is at Alabama.

Simply because the second date is deep in the season, there is more risk the network will get stuck with a blah contest like it did in 2019.

Late last May, CBS said it would telecast two games on both Sept. 21 and Nov. 16, excluding Alabama-LSU from one of its doubleheaders for the first time in years and there was no doubt Georgia vs. Notre Dame would be a natural for the nightcap in September. After all, Notre Dame participated in the College Football Playoff the previous year, Georgia was in the CFP finals a year earlier, and both teams were expected to be in the preseason Top 10.

The first game of the doubleheader matched unbeaten Auburn and A&M, which had lost only to Clemson.

In the second doubleheader of 2019, Georgia (8-1) at (7-2) Auburn in mid-afternoon was attractive and the Bulldogs hung on for a 21-14 victory. Earlier in the day, Florida was 7-2, but Missouri had lost three in a row on its way to a five-game losing streak that ended in Little Rock two weeks later.

This year, two, maybe three, of the four teams in the October doubleheader should be unbeaten, and the only loser might be the team on the short end of Georgia at Alabama in the third game of the season.

If any of the teams involved in the Nov. 21 games unexpectedly stumble badly, CBS’ only other option that day is Kentucky vs. Georgia because the other eight SEC teams play non-conference opponents that day.

Before delving into the network’s weekly options, one of the nuggets gleaned from the grid is that the Mississippi schools, both with new coaches, have a unique task — playing SEC games on five consecutive Saturdays. Beginning Sept. 19, the Rebels take on Auburn, LSU, Alabama, Vanderbilt and Florida. A month later, Mississippi State’s challenge is Alabama, LSU, Auburn, Missouri and Kentucky.

Several teams play four SEC games in a row, but South Carolina doubles up with four league games, an open date, and its other four conference games.

On the other hand, Arkansas gets a break, playing no more than three SEC games on consecutive weekends. The Razorbacks vs. Missouri season finale — this year in Kansas City at Arrowhead Stadium — will likely be on CBS the day after Thanksgiving, but Arkansas is unlikely to win enough to qualify for a Game of the Week.

Since CBS telecasts of the SEC began the third week of the 14-week long 2019 season, one person’s opinion of the network’s weekly choices this year begins with Week 2 of the 13-week season:

—Sept. 12, Texas at LSU: The defending national champion with a quarterback replacing Heisman Trophy winner Joe Burrow vs. the Longhorns with Sam Ehlinger — who has produced more than 10,000 yards in three years — at quarterback.

—Sept. 19, Georgia at Alabama: Division favorites and preseason Top 10 teams meeting for the first time since the SEC title game in December 2018.

—Sept. 26, Florida at Tennessee: Two weeks after an expected loss to Oklahoma, an opportunity for the Vols to prove they are an SEC East contender.

—Oct. 3, Texas A&M at Mississippi State: A lukewarm selection, but Mike Leach’s quarterback may be putting up eye-popping numbers after three nonconference games and an outing vs. Arkansas.

—Oct. 17, Texas A&M at Auburn: There is a good chance the Aggies will be 6-0 and on the verge of an SEC breakthrough under Jimbo Fisher.

—Oct. 24, Alabama at Tennessee: A weak week, but the Vols have an open date extra to prepare for a big home game.

—Oct. 31, Florida vs. Georgia at Jacksonville: A no brainer.

—Nov. 14, South Carolina at LSU: A possible “trap” game for the Tigers because the Gamecocks follow the Crimson Tide and precede games against Auburn and A&M. Otherwise, use a dartboard.

—No. 28, Auburn at Alabama: A traditional rivalry with SEC West ramifications.