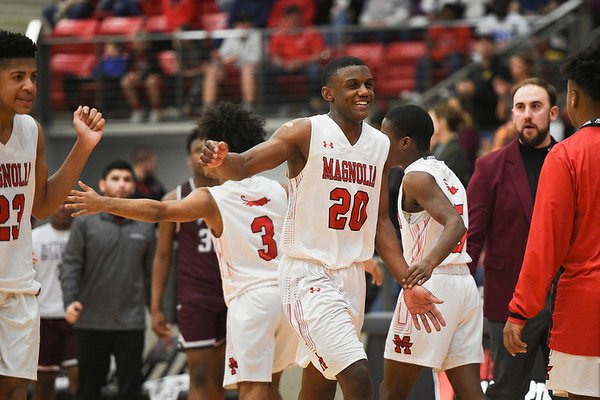 Magnolia guard Derrian Ford (20) reacts, Friday, March 6, 2020 during a basketball game at Cardinal Arena at Farmington High School in Farmington. Ford also lead the team on Saturday with 36 points in a 2 OT win over Brookland to advance to the Class 4A State Boys final for a second straight year. (NWA Democrat-Gazette/Charlie Kaijo)

The 2020 class of basketball recruits in Arkansas is considered to be one of the state's best in recent memory, but it looks like the 2022 class will rival it.

The 2020 class featured five prospects with Arkansas offers who either live in the state or lived there before going to school elsewhere. The list includes Jacksonville guard Davonte Davis, Fort Smith Northside forward Jaylin Williams and West Memphis forward Chris Moore. Davis (Arkansas) and Moore (Auburn) have signed letters of intent, and Williams is committed to the Razorbacks.

The 2022 class already has four prospects with Arkansas offers and others are drawing interest from the Razorbacks, including Morrilton guard Joseph Pinion (6-5, 175 pounds), who received an offer from Kansas on Tuesday.

Magnolia guard Derrian Ford (6-3, 195 pounds) received an offer from Arkansas in May 2019. He also has scholarship offers from Florida, Texas A&M, Alabama, Oklahoma State, TCU, Baylor and others.

He was named the Arkansas Democrat-Gazette Underclassman of the Year after leading Magnolia to the Class 4A state title as a freshman. He and the Panthers were to play Mills again for the state championship earlier this month when the game was postponed because of coronavirus.

Sylvan Hills guard Nick Smith Jr. (6-4, 168) became the second in-state prospect to earn an offer from the Razorbacks in June 2019. He had offers from Oklahoma State, Oral Roberts and Tulsa at the time, and has since added offers from Texas, Auburn, Ole Miss, St. John’s and others.

Smith averaged 15.4 points, 2.2 rebounds, 3.4 assists and 1.4 steals per game while shooting 41 percent from the field and 29 percent beyond the 3-point line as a freshman.

Mills guard Javion Guy-King (6-5, 190) got his Arkansas offer in August 2019 to become the third in-state prospect to be offered by the Razorbacks.

Alcorn State has also offered Guy-King, who is drawing interest from Alabama, Auburn, Vanderbilt and others. He averaged 15.2 points, 8.3 rebounds and 3.6 assists this season.

North Little Rock center Kelel Ware (6-10, 195) received his offer from the Razorbacks in January to go along with one from Oral Roberts. Virginia Tech and Texas A&M have followed with offers.

Pinion had offers from Oral Roberts, South Alabama and Central Arkansas before the Jayhawks offered. He’s drawing interest from Arkansas, Baylor, Tulsa, Vanderbilt, Virginia and others.

He and his family visited Fayetteville in November. He averaged 18 points, 7.9 rebounds, 1.3 assists, 1.6 steals and 1.4 steals this season.