Obeying orders on the river 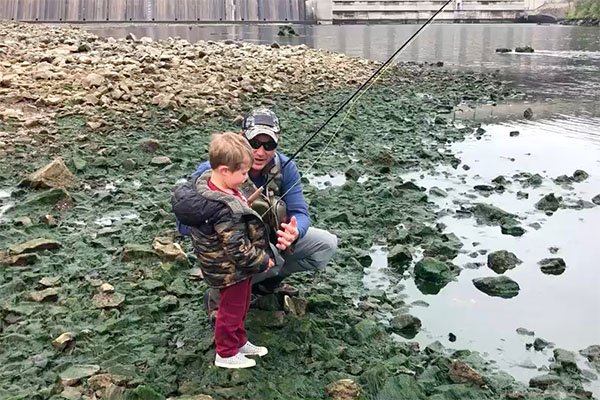 Jeremiah Gage talks with his 3-year-old son Wyatt during a recent fishing trip on the White River.

Fortunately, what I do for stress release is also safe from the coronavirus. I fly fish, mostly solo.

Asa Hutchinson helped my ability to fish a great deal by including it among the list of things that are still OK in our social-distancing habits. You avoid “the bug” by tying on a bug. Thank you, Governor.

I match the hatch in the river. Hopefully, I’m stopping the hatch elsewhere. My wife approves. I can go by myself, then tie flies at night when something works.

There is good news: a lot is working on the White River right now. And, guides have dates available since folks coming by airplane from far away places have canceled.

If you know a guide, call them right now. I can recommend one who is related, Norfork’s Kristopher Bouldin. He guided me Sunday and we boated 150 in five hours. There were several giant brown trout landed with a fly rod.

It was glorious. And, it was safe. If I hadn’t been fishing with Kristopher, I would have been with him at home. He’s married to my daughter and lives next door.

Fishing on the White River

My favorite place is the White River below Bull Shoals Dam. I fished there for a few hours several days over the last week. I did not park near anyone, but there were only three other vehicles in the parking lot those days. I never came within 50 yards of another person.

Well, that was until Tuesday. My fly fishing mentor found a rental to “social distance” on a bluff above the White River. Jeremiah Gage, his wife Ginger, and son Wyatt are like family. They are able to work any place, because it’s tied to a laptop these days.

Work at home is what most of us are doing. They found a place to quarantine for a few weeks, and it’s right above Bull Shoals State Park. If you fish below, they can watch with binoculars and determine if the bite is on.

I can save anyone that trouble. It’s on, perhaps the start of the caddis hatch.

We were invited to a dinner with the Gage family, but that hasn’t happened yet.

I decided the best way to see Jeremiah and Wyatt was on their first father-son fly fishing trip. Little did I know that Wyatt would catch a trout on their first cast in the spot I showed them.

Quickly, I became their video man when Jeremiah put the rod in Wyatt’s hands to “fight” and land a rainbow trout. The fish was like Wyatt, young for the river. It was the perfect combination.

Wyatt did his part, including a smile for the camera and a pretty good quote when prompted, “Cheese!”

This was full circle stuff for me, guiding Jeremiah and his son.

It was about 20 years ago when Jeremiah was a sophomore at the University of Arkansas that I insisted that I’d mentor him on some things he was facing, just after he lost his mother. But he’d have to teach me to fly fish.

Some of that was relayed to Fayetteville resident Jeff Courtway when he ventured by a little later. I’d left Jeremiah and Wyatt to catch a few more fish, including a 20-inch brown trout. I’d covered Jeff as a high school senior at Conway High School around 45 years ago.

“Are you Louis Campbell?” Courtway shouted from the bank as I fought a cutthroat in the middle of the river.

Louis had fished with me a day earlier in that same spot when I landed a 24-inch brown trout. I don’t look anything like him and he’s a left-handed caster. How could anyone mistake us? Apparently, Jeff had seen Louis in the river that day before I arrived.

“Then, you must be Clay Henry?” Courtway said.

“Yes, you are,” Courtway said.

I relented and was glad when he identified himself and a friend from Kansas City.

There were tips on the right fly as we talked across the water, probably too loud for some fly fishers 200 yards away. Jeff said he’d admired my casting from 100 yards. I admitted I’d spotted them and worried they were going to try to take my spot.

Funny, but these days, no one crowds your spot. They don’t want to get too close, even if you are catching fish.

I pointed to Jeremiah with Wyatt, with the explanation that he’d taught me how to fly fish. Basically, I told Jeff, “That’s my mentor.”

No one was within 50 yards of each other, perfect social distancing.

Jeremiah said, “I’m not his mentor anymore. I haven’t fished much of late. He’s the one in the river. Listen to Clay, not me.”

All of that is probably true, but I get the feeling that Wyatt will change that. He was into fly fishing from the start.

I then demonstrated to Courtway how to “walk the dog,” to catch a trout in the flats that I was fishing. I told him, “Just keep a wiggle in the floating line, nothing tight to the indicator. And slowly walk even with your drift so you don’t have to cast again. That’s how a dead drift works and trout will take it.”

Jeff was taking his friend to a riffle far below. He wanted faster water, not the slow drift I like. He wasn’t sure he could catch trout with my method, because it’s not easy. Maybe he’ll try it next time.

That will change. He’ll soon want one of those 20-inch brown trout his dad caught.

We all got to fishing. The pleasantries were over. It was time to catch some trout and the good bite became a great bite.

Normally, I would have stopped, walked to the bank and shook some hands and handed out midges. Not this time.

I was doing what the Governor said, staying clear of even great friends.

Plus, it was a great excuse to just keep fishing (and catching).