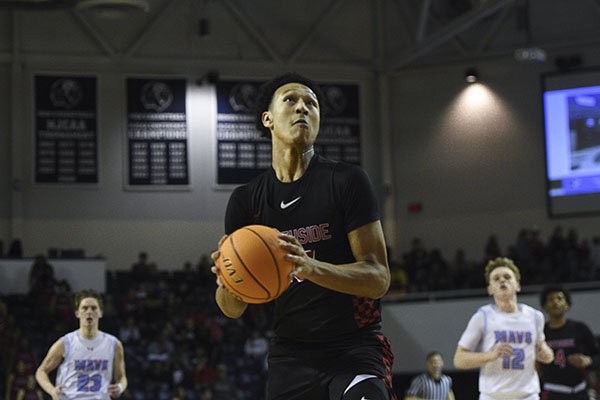 Fort Smith Northside’s Jaylin Williams presented an imposing figure at 6-foot-10 on the high school basketball court but he’s worked hard to expand his game with an eye on making a quick splash in the collegiate ranks.

The senior once again averaged a double-double and claimed the title of Northwest Arkansas Democrat-Gazette Division I Boys Player of the Year for the second consecutive season.

Grizzlies coach Eric Burnett said Williams didn’t rest on his laurels after leading Northside to the Class 6A state a year ago and earning state tournament MVP honors. He spent the offseason working on becoming a better perimeter shooter and improve his ball-handling.

“I feel like he improved shooting the ball and got more aggressive,” Burnett said. “I think he got more confident on the AAU circuit. I think he felt like he was the man every time he stepped on the floor.”

Jaylin Williams, the Arkansas Razorback commit, helped lead Northside back to the state semifinals before falling to a red-hot Little Rock Central team, 40-37. Williams, who was held to single digits in scoring just once in 30 games, finished with 17 points and 13 rebounds in the season-ending loss.

His skills and athleticism should fit well at Arkansas, Burnett said. He finished the season averaging 19.3 points, 12.6 rebounds and 2.5 blocks per game for Northside, which finished 20-10.

“He can stretch the floor because he shoots the three so well,” Burnett said. “He got stronger, too, and was able to handle the double- and triple-teams and still go finish.”

Williams, who also earned Arkansas Gatorade Player of the Year honors, said he worked specifically to improve his ball-handling and outside shot.

“When I talk to coach Muss [Arkansas coach Eric Musselman] they like position-less basketball,” Williams said. “To make sure I’m on the court, I know I’ve got to be able to handle the ball and do everything else.”

Deffebaugh made quite the journey as a longtime assistant mainly in the college ranks, but finally got his chance to be a head coach at Har-Ber. He guided the Wildcats to the 6A-West Conference championship and a state tournament berth in his first season.

Deffebaugh contacted Wayne Stehlik, athletic director for Springdale Public Schools, to give him a recommendation for a friend seeking a different job within the district, but Stehlik had something for him — a job opportunity.

“All I did was just keep working hard, keep communicating, keep doing the right things,” Deffebaugh said. “You hope someone will notice and give you an opportunity.”

Deffebaugh persevered for 30 years as an assistant coach, which included 10 different colleges and two high schools, to earn his first high coaching position. He simply asked his players — particularly the seniors — how they wanted this chapter to be written.

“I didn’t do anything magical,” Deffebaugh said. “They wanted to have a great senior season as a collective group. They bought in and understood their role from senior nine to one.”

The coach pointed to one big moment when the Wildcats rallied from an 18-point fourth-quarter deficit in just the fourth conference game of the season against Bentonville West on the road.

“It wasn’t just one guy, everyone picked it up and did their job,” Deffebaugh said. “And once we got in that dressing room it was a celebration.”

Corey Williams Jr. joined the Fayetteville program in the summer after his father, Corey Williams Sr., was hired as an assistant coach on Musselman’s staff at Arkansas.

Fayetteville coach Brad Stamps said he was a playmaker on both ends of the floor for the Purple Bulldogs.

“He gave us an extra perimeter player who could score, we knew we had that right off the bat,” Stamps said. “But what was impressive was his progress on the defensive end. That gave us a chance to be highly successful.

“He picked it up on the defensive end late. We started putting him on an active offensive player and he was able to harass and limit what other teams wanted to do at that position.”

The junior guard said he was able to get more and more comfortable thanks to his teammates and coaches. He averaged a little more than 12 points per game, but scored 35 and tied a school record with eight 3-pointers late in the season.

“It just took a while to grow with the team,” Williams Jr. said. “I listened to coach Stamps and let the offense come to me and let my teammates find me and it all started clicking.”