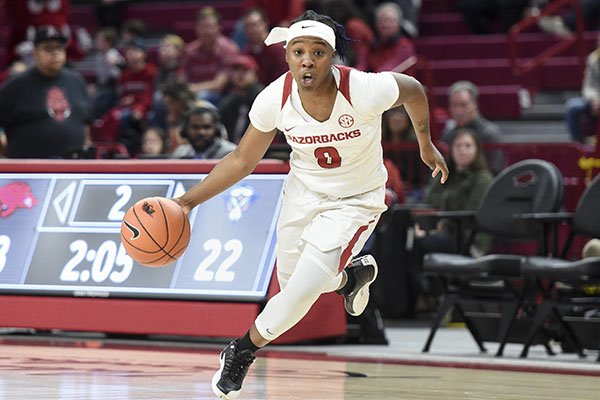 Arkansas guard A'Tyanna Gaulden dribbles the ball during a game against Tennessee-Martin on Sunday, Dec. 29, 2019, in Fayetteville.

A'Tyanna Gaulden and Rokia Doumbia, a pair of key reserves for the University of Arkansas women's basketball team, have both entered the transfer portal, Razorbacks Coach Mike Neighbors confirmed Thursday.

Both played big roles off the bench for the Razorbacks (24-8), who finished ranked No. 24 in the final Associated Press poll and No. 25 in the USA Today Coaches' Poll.

Gaulden, a 5-7 redshirt junior, finished with a team-high 100 assists despite averaging just under 17 minutes per game. She averaged 6.9 points, 2.1 rebounds and 3.2 assists and played in all 32 games despite not starting in one.

Doumbia also emerged as a strong component off the bench, averaging 16 minutes per game this season. The 5-9 sophomore averaged 3.2 points, 4.2 rebounds and 1 assist, appearing in all 32 games with no starts. She had a season-high 13 points and 10 rebounds in 29 minutes in the Razorbacks' 100-66 victory at Vanderbilt on Jan. 19.

They could choose to remove their name from the portal, but both players have been removed from the Razorbacks' roster on the team's website. In addition, Arkansas would be under no obligation to take them back.

The two entering the portal is a first for the Arkansas women's program.

"As of last year, only us and Auburn didn't have a player who had went in the portal among Power 5 schools," said Neighbors, who recently completed his third season at Arkansas. "They've got seven in it right now. We had Rokia earlier and now I-T [Gaulden]."

"As a coach, you've started to anticipate things like this more and more every year. After year three, we have some quality depth, and with the incoming kids everyone is aware of, I couldn't have predicted it but anticipated is a fair word to use."

The Razorbacks have gotten just one player from the portal. Arkansas plucked sharp-shooting guard Amber Ramirez, who sat out the 2018-19 season under NCAA transfer rules. She was one of the top three-point shooters in NCAA Division I, finishing second in three-pointers made (106) and ninth in three-point percentage (44.7). Those two figures also set school records.

Gaulden has already transferred once, moving from Florida State to Arkansas following her freshman season.

With two players transferring, Arkansas would have an open scholarship for the coming season, but Neighbors said it's not likely he would look for someone to play immediately. It would more likely to be utilized to balance the roster, losing four to graduation after next season.

Ramirez, Taylah Thomas, Chelsea Dungee and Jailyn Mason will be out of eligibility after next season.

"We have no intention of bringing anybody in to compete with the current roster," Neighbors said.

That current roster includes four returning starters and Mason, a three-year starter who redshirted this season because of an injury. Others like the Razorbacks' chances, too, since ESPN ranked Arkansas No. 19 this week in their early preseason top 25.