On this date in Razorback history, March 28 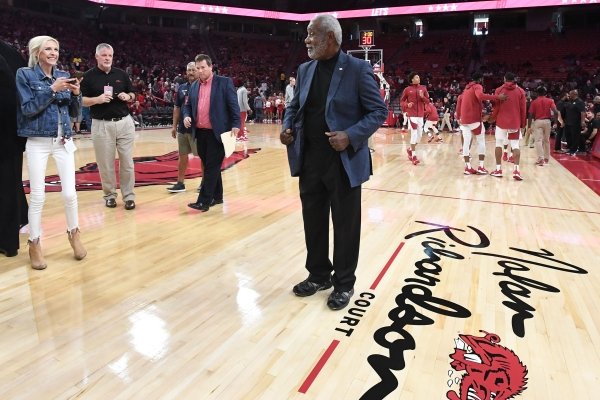 Former head coach for the Razorbacks basketball team Nolan Richardson poses for photos Sunday, Oct. 20, 2019, after the court at Bud Walton Arena in Fayetteville was named after Richardson. The court will now be known as Nolan Richardson Court.

University of Arkansas trustees voted to name the court at Bud Walton Arena after former Razorback coach Nolan Richardson during a meeting in Hot Springs.

The vote was unanimous and followed recommendations from university leaders and the UA Associated Student Government in the preceding months. There had also been a groundswell of public support for the dedication.

Richardson coached Arkansas for 17 seasons and won a school-record 389 games. He led the Razorbacks to the Final Four three times and in 1994 won the school's only national championship in basketball. He is a member of the Naismith Memorial Basketball and National Collegiate Basketball halls of fame.

Despite that, naming the court after him wasn't a foregone conclusion. Richardson was fired by the UA in 2002 after alleging racial discrimination, and in 2004 he had a lawsuit against the university dismissed in federal court.

Trustee John Goodson, the board chairman who introduced the resolution, said the honor was "long overdue."

"I think we've all been able to reflect on the impact Nolan Richardson had on the university," he said.

The floor was formally named for Richardson during a preseason scrimmage between Arkansas and Arkansas-Little Rock on Oct. 20, 2019. The court design features two 6-foot high, 10-foot long logos that include Richardson's signature in black, and a red slobbering hog logo that was used at midcourt while Richardson was the team's head coach.

Several of Richardson’s former players were on the floor for the dedication, as was St. John’s coach Mike Anderson, who was Richardson’s longtime assistant at Arkansas and who had been fired as the Razorbacks' head coach seven months earlier. Former U.S. President Bill Clinton delivered a video address that congratulated Richardson.