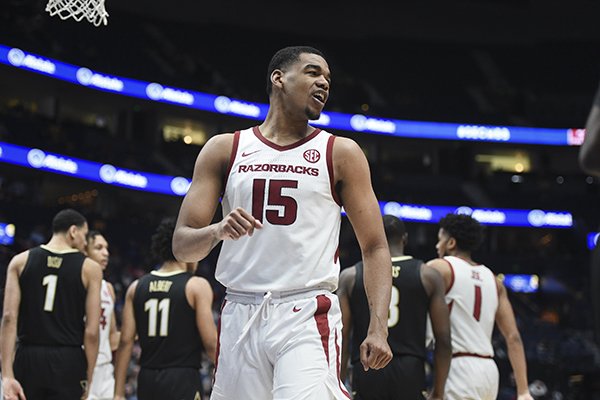 FAYETTEVILLE -- University of Arkansas guard Mason Jones, a junior this season, is among 38 college basketball players with eligibility remaining who have announced they're making themselves available for this year's NBA Draft.

Jones, voted by media members as The Associated Press co-SEC player of the year and an honorable mention All-American, posted on his Twitter account Friday that after much discussion he has decided to enter the draft.

Jones, who couldn't be reached for comment, didn't specify in his tweet if he will not sign with an agent -- which would allow him to retain his college eligibility if he withdraws from the draft by the NCAA deadline of June 3 -- or if he plans to stay in the draft.

But Jones indicated he's looking forward to what's next for him.

"This has been a lifelong dream of mine to play in the NBA," he tweeted. "So I'm looking forward to the next chapter of my life."

"Mason had a phenomenal season," Arkansas Coach Eric Musselman said in a statement released through the UA. "It came through hours of hard work and dedication as well as a desire to be the best player he could be.

"Our system gives players the freedom and opportunity to showcase their strengths and Mason took full advantage of it to become one of the top players in college basketball this season.

"We fully support Mason, and any player, pursuing his dream."

Jones thanked Musselman, the Arkansas coaching staff, his teammates, fans and his family and friends in his Twitter announcement.

After Musselman's statement was posted, Jones replied on Twitter, "It means a lot to hear this from your coach ... Glad I was able to set the tone for your program ... All God."

The draft, which consists of two rounds and 60 picks, is scheduled be held June 25 at the Barclays Center in Brooklyn, N.Y.

Jones is not listed as being drafted in the first round in any mock drafts, or even in the drafts that go two rounds. ESPN lists Jones as the No. 80 draft prospect.

The NBA Scouting Combine is scheduled to be held May 21-24 in Chicago, but it could be rescheduled or canceled because of health concerns over the coronavirus. The NBA suspended play March 11 because of the virus, and for now teams are not having draft prospects in for workouts.

Only 60 prospects are invited to the combine, so there's no guarantee Jones will be included if the combine is held. Whether the NBA will hold its summer league, a showcase for rookie free agents as well as draft picks, also is in doubt.

The number of early entries for the draft figures to grow because the deadline for college players to declare isn't until April 26.

If Jones doesn't return to Arkansas for his senior season, the Razorbacks will have two scholarships available. One scholarship opened earlier this week when guard Jalen Harris announced he's entering the transfer portal. Harris will have immediate eligibility at his new school as a graduate transfer.