On this date in Razorback history, March 29 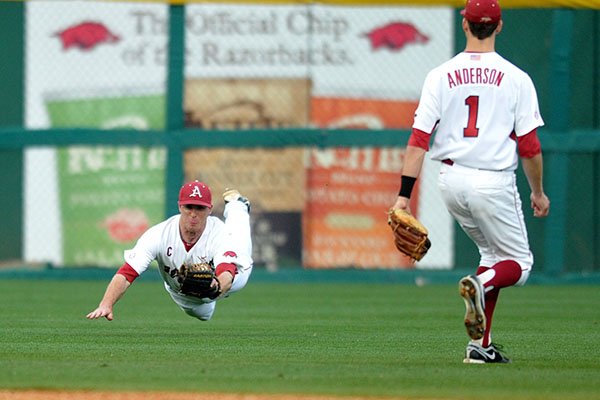 Arkansas' Matt Vinson makes a diving catch during a game against Mississippi State on Friday, March 29, 2013, in Fayetteville.

Arkansas’ Matt Vinson had the game’s offensive and defensive highlight in a 5-4 series-opening win over Mississippi State at Baum Stadium.

From his defensive position in left field, Vinson made a diving catch to end the top of the second inning. In the bottom of the seventh he hit a bases-clearing, three-run triple to give the Razorbacks the lead after they had fallen behind in the top of the inning.

It was the second time in three SEC games that Vinson had a game-winning hit for the Razorbacks. He had a two-run single in the ninth inning a week earlier at South Carolina.

Vinson, who drew a bases-loaded walk early in the Mississippi State game, finished with 4 RBI.

Arkansas closer Colby Suggs struck out Alex Detz, a .370 hitter, with the bases loaded for the game’s final out. It was the second of Suggs’ 13 saves in 2013, a school record at the time.

The Bulldogs won the following day, but the Razorbacks won the finale to take the series from Mississippi State, which was ranked 15th at the time and went on to lose to UCLA in the championship round of the College World Series.