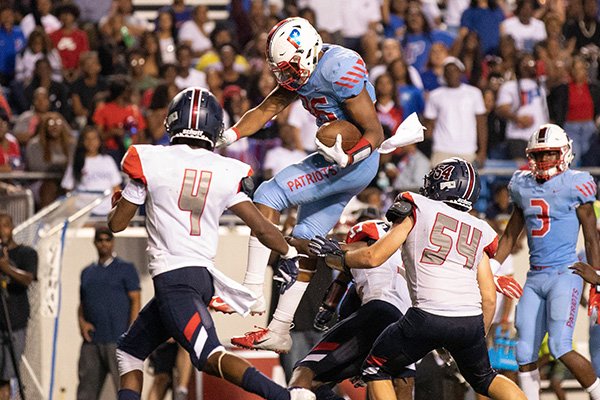 By making Outley the first in-state prospect to receive an offer from Pittman on Dec. 20, the Hogs made a strong impression.

"Made me feel important to the program," Outley said. "We talk about family. We talk a lot. We're just trying to build a relationship."

Outley, 6-4, 235 pounds, of Little Rock Parkview had offers from Kansas and Memphis prior to the one from Pittman. Since the Razorbacks' offer, he's added about 15 others offers, including Florida State, LSU, Texas A&M, Tennessee, Missouri and Arkansas State.

He made an unofficial visit to Fayetteville on Feb. 1, and the coaches laid out how they would use him.

"Be able to split me out, put me in the backfield," Outley said. "Put my hand in the ground."

"They're ready for me to become a Hog," Outley said. "They say they want me there. Want me bad. I'm a priority."

Outley's 8-year-old brother Isaiah was won over by the Arkansas coaches during the trip. He sat at Pittman's desk for pictures.

"He loves Arkansas," Outley said. "That's his favorite team, and he loves the coaches up there. They're really the first coaches he met."

While driving back to Little Rock, Isaiah asked his brother and parents a question.

" 'When are we going to go back and visit again?' " Outley quoted his sibling saying.

The Hogs and two other schools are aggressively recruiting him.

"A lot of schools are showing a lot of love," Outley said. "I will say the ones that stand out are Florida State, Arkansas and Memphis. They're probably showing the most love out of all."

Patriots Coach Brad Bolding said Outley was outstanding despite being a marked man.

"Erin was a key part of the offense, and he made plays even though teams were keying on him," Bolding said. "He lined up all over the field. Understands the game better and keeps improving his blocking."

The NCAA-mandated dead period that forbids prospects from visiting colleges because of the coronavirus pandemic began March 13. Outley had trips planned to Georgia, Georgia Tech, Florida State, Arkansas, Arkansas State, Memphis and South Carolina prior to the dead period.

The Arkansas Activities Association implemented a dead period that runs until April 17. The dead period forbids athletes from using their school's facilities.

"I work out in my front yard," Outley said. "Just running, parachutes, foot speed running routes with my quarterback when he comes over. Just staying in shape."

He plans to narrow his list at some point.

"I probably will in the winter or the end of the year, but I really don't know," Outley said.

He said he will probably make his college decision after his senior season.