All-Arkansas Preps Player of the Year:

Excelling on all levels commonplace for Davonte Davis 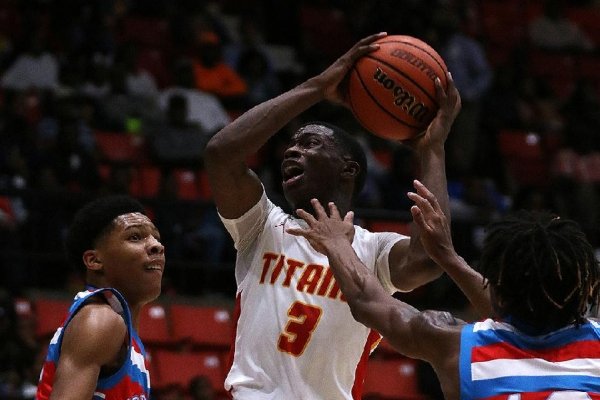 Trying to peer into the mind of Jacksonville point guard Davonte Davis was about as hard for his coaches as it was for his opponents this season. For a program trying to reclaim its status as one of the state’s best, gauging the on-court thoughts of the top-ranked point guard in Arkansas would do the Titans no good.

But allowing Davis to do his thing on the floor did wonders.

“There were times where we didn’t know how he saw a guy open,” Jacksonville Coach Victor Joyner said of his ambidextrous star. “Shoot, we’re on the floor, and a lot of his passes we didn’t anticipate. I mean, as coaches, we sometimes had no clue as to how he was able to do some of the things that he was able to do. His vision, his basketball IQ … he’s that gifted of a player.

“And to be honest, I don’t think he’s even tapped his potential.”

Davis At a Glance

NOTEWORTHY Ranked as the No. 83 player in the nation by ESPN. ... Scored at least 20 points 13 times this season, including a season-high 36 against Pine Bluff. ... Recorded at least five assists and four rebounds in every game. ... Came within three steals of having a quadruple-double against Sylvan Hills on Feb. 18 (25 points, 15 rebounds, 10 assists, 7 steals).

Davis may not have reached his full capabilities, but he drained opponents dry with his relentless play and tireless motor, which is one of the reasons why the lanky 6-4 senior was named the Arkansas Democrat-Gazette All-Arkansas Preps Boys Basketball Player of the Year.

The University of Arkansas signee averaged 21 points, 10 rebounds, 8 assists and 3 steals per game for the Titans, who went 20-5 and won the 5A-Central Conference title with a 13-1 mark. Jacksonville also reached the Class 5A state championship game after spending the postseason at home last year.

“We came a long way from what we did last season, considering we didn’t even make it to state,” Davis said. “With me being hurt at times last year, I tried to come back even stronger and lead this team. As a whole, I thought we did very well, and from my perspective, I’d give our season an A-plus.”

If there’s a grade higher than what he issued for his team, Davis achieved it with his run of performances. He scored in double figures every game and had 17 games with at least 10 points and 10 assists. Even more impressive, he registered seven triple-doubles, including four during a dominant five-game surge in league play. Those types of outings weren’t by design for Davis, but they were out of necessity.

Jacksonville’s struggles toward the end of last season kept it out of the playoff picture, and Davis said one of the biggest goals he had for himself this year was to not allow that to happen again. In order to do that, he was willing to do just about anything.

“I wanted to come in with a winning mindset from the start,” Davis said. “I love to win, no matter how it comes. It doesn’t matter how it happens, just as long as we get the ‘W.’ Whether I’d leave the game with 2 points, 10 boards and 2 steals or come out and score 40 or 50 points.

“I always try to come out and get my teammates involved because you don’t win individually. We play for each other and win together, and we were all willing to do everything it took to be successful.”

The ride did get a bit bumpy for Jacksonville when it lost three nonconference games in a row.

“I don’t think everyone was gelling together, and he wasn’t on the same page that I was on starting out,” Joyner said of Davis. “We struggled, even during the games we won, and dropped a few early. But the kid is unselfish, and he started to understand what I wanted out of him. Once he bought into what we were trying to do and wanted to do with him and his abilities, he got to that A-plus level. He started making everybody around him better and once that started to happen, we got better.”

After Jacksonville dropped a 59-56 decision to Little Rock Central on Jan. 7, the Titans won their next 13 games. Davis had 12 double-doubles during that streak, complete with a game-winning jumper against Maumelle on the road. Jacksonville did lose junior standout Jordan Maxwell during that run of games, but Davis said he believed his team got stronger afterward.

“Losing Jordan was tough because he was a big piece for our team,” he explained. “After he got hurt, we’d get on group chat and talk to him and let him know we were going to [win the title] for him. We were going to push hard and work even harder during practice, not saying that we didn’t work hard already.

“But we were going to push ourselves even harder to be able to become a better team. And we knew he’d be cheering us on.”

Davis received a lot of fanfare at Jacksonville, but he’ll get even more love when he takes the floor next season for a Razorbacks team that made strides under first-year Coach Eric Musselman. The four-star guard is expected to compete for a starting job once he sets foot on campus, and his high school coaches believe he has what it takes to do just that.

“His vision is absolutely something you cannot teach, and it sets him apart from others,” Jacksonville assistant coach Monty Patel said. “I’ll sit on the bench and as coaches, we know what we’re looking for in an offense and somehow or another, he’ll make this pass and we don’t know who the heck he’s throwing it to. Either it’s going to land in someone’s hands or bounce off someone’s hands because they weren’t ready.

“We’d constantly tell his teammates that he sees them even when they think he doesn’t. His game will translate tremendously to the college level.”

Joyner agreed, but noted that Davis’ vision will also pay dividends on the defensive end of the floor.

“That’s one of the things that turned us around,” Joyner said. “He bought in on defense. Everybody likes offense, and he is going to make things happen when he has the ball in his hands. That, in itself, is going to be phenomenal for fans to watch.

“But once he gets up there in Fayetteville and the coaches see just how good he is on defense, that’s what’s really going to impress them.”

Then again, it wouldn’t surprise Joyner if Davis finds some other way to put his stamp on the Arkansas program as a freshman.

“Every time he got challenged by a player or a coach, he’d drop 25 or 30 points and 10 assists,” Joyner said. “He’s got so much room to improve because once he gets up there and he gets around a bunch of guys with the same talent he has, it’s going to be scary. He’s already a handful for anybody, and he’s got a chance to go to that next level.”