Spring athletes get back year of eligibility lost to coronavirus 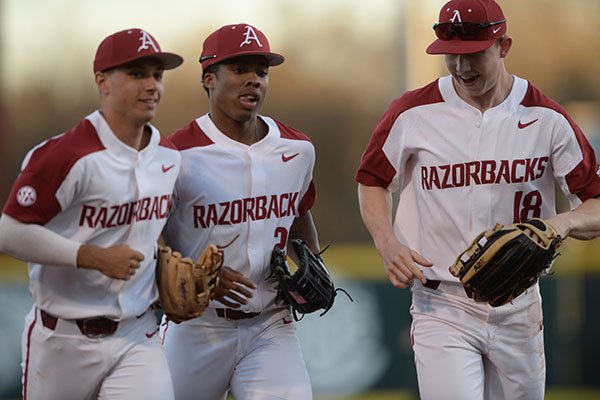 Arkansas center fielder Christian Franklin (center) is congratulated Tuesday, March 10, 2020, by right fielder Heston Kjerstad (right) and second baseman Robert Moore after Franklin threw out Grand Canyon designated hitter Dominic Grissom as Grissom attempted to advance from second to third on a ball hit to the outfield during the second inning at Baum-Walker Stadium in Fayetteville.

FAYETTEVILLE — Spring sport athletes whose seasons were cut short by coronavirus will receive an extra year of college eligibility, the NCAA’s Division I Council ruled Monday.

The NCAA also relaxed spring roster and scholarship limits for the 2020-21 school year to account for incoming freshmen and returning seniors who would have otherwise exhausted their eligibility this spring. NCAA rules allow athletes to have four seasons of competition during a five-year period.

All athletes, no matter their classification, who competed this spring can appeal to restore the lost season, but scholarship and roster limits will apply to all athletes again after the 2021 spring season.

For seniors who choose to return in 2021, colleges will not be obligated to honor this year’s scholarship agreement, but can offer a scholarship equal to or less than the amount that was promised this year. Most spring sports function as equivalency sports, meaning most athletes only receive partial scholarships, as opposed to full rides in sports like football.

Programs that are already feeling a financial pinch will have the ability to utilize an NCAA assistance fund to help pay for scholarships for returning spring seniors next year. The NCAA last week announced it would distribute $225 million to its 300-plus Division I schools this year, $375 million less than budgeted after the cancellation of its biggest money maker, March Madness.

The extra of eligibility is especially important in college baseball because of the MLB Draft. Most baseball players are drafted after their junior year when they can leverage the highest signing bonus, but with a baseball draft that could be as short as five rounds this year, some players could have been put in a difficult situation without the extra year of eligibility.

Before news broke of a potentially-shortened draft, Arkansas baseball coach Dave Van Horn said he expected junior position players Heston Kjerstad, Casey Martin and Casey Opitz would turn pro this summer. According to their Baseball America prospect rankings, all three players fall within the picks that make up the first five rounds, with Kjerstad and Martin projected to be selected in the first round.

But where the eligibility and roster size modifications passed Monday will help Arkansas most likely will be with juniors that would have been drafted any other year, but might go undrafted this year.

Coaches eager to begin work on their 2021 rosters have essentially been in a holding pattern for two weeks while awaiting the NCAA vote.

“I mean how unfair would it be if you were a freshman and you had seven at-bats or two at-bats….If you don’t get this year back it doesn’t make any sense. It shouldn’t be just for seniors. It should be for everybody that is on the team.”

Coaches reached by the Arkansas Democrat-Gazette on Monday were either unavailable for comment or wanted to wait to comment until they had a better feel for how the decision would affect their teams. Van Horn is scheduled to address the NCAA’s decision on a teleconference Tuesday morning.

Arkansas athletics director Hunter Yurachek wrote on Twitter that he appreciated the Division I Council’s decision, with “several important details to be clarified and decided by institutions, coaches and student-athletes.”

“We had long discussions around the fact that this does not avoid substantially difficult circumstances, but what we felt was important was to localize decision-making and to ensure that we were as permissive as possible,” said Penn athletics director Grace Calhoun, who chairs the Division I Council.

A similar decision to restore blanket eligibility was approved for the NCAA’s Division II last week, but the Division I vote was expected to be tight. The 34-member Division I Council is made up of college sport administrators representing all Division I conferences, plus two members of the student-athlete advisory committee (SAAC).

Prior to Monday afternoon’s vote, SAAC representatives from Power 5 conferences - the SEC, ACC, Big 12, Big Ten and Pac-12 - released a joint statement that recommended most of the same eligibility and scholarship parameters that passed the Division I Council.

“Eligibility relief should be accessible,” they wrote. “Roster limits and competition fields should also be expanded to accommodate returning seniors and incoming freshmen.”

Athletes had also requested an extra year of eligibility for winter sports, such as basketball and gymnastics, because the NCAA postseason was canceled. The NCAA’s ruling did not apply to winter sports, however, because those sports had concluded all or most of their regular seasons at the time of the shutdown earlier this month.

The NCAA announced it was canceling its postseason championships in all winter and spring sports on March 12, and college sports in the U.S. had essentially ceased as of the following day. Some conferences, such as the SEC, waited until last week to call off their regular-season competitions.

Sports such as tennis and golf were in the second half of their regular seasons at the time of the shutdown, while baseball and softball were in the first half. The outdoor track and field season had yet to begin.