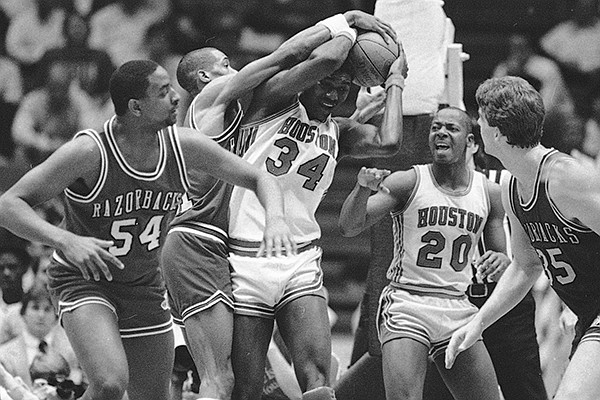 Houston's Akeem Abdul Olajuwon (34) is fouled by Arkansas' Alvin Robertson (21) in the first half of the championship game at the Southwest Conference Tournament in Houston on March 11, 1984. (AP Photo)

They were monumental battles.

The year was 1983, and the University of Arkansas was the defending Southwest Conference champions.

It was Joe Kleine’s first season after sitting out a redshirt year after transferring from Notre Dame.

It was Akeem (later Hakeem) Olajuwon’s second season with the Houston Cougars.

He arrived as a 7-foot soccer player with some skills. Between his freshman and sophomore seasons, he became Akeem the Dream.

In their first battle, Kleine held Olajuwon to eight points and 10 rebounds, and put 4 fouls on him. Kleine had 14 points but also was plagued with four fouls. Darrell Walker had 25 for the Hogs in the 75-60 loss.

A couple of weeks earlier — after a 112-58 drilling of Pacific as part of the Cougars’ 26-game winning streak that carried them to the national championship game — they had been nicknamed Phi Slama Jama, Texas’ Tallest Fraternity.

Tommy Bonk, then a columnist for the Houston Post and later for the Los Angeles Times, came up with the name and gave all marketing rights to the school, from which it made a small fortune in T-shirt and pennant sales.

In December, the Cougars lost to Syracuse and then flew to Tokyo for a game in which they lost to No. 1 Virginia 72-63.

Then it all came together. They were running, stunning, flying high and dunking the ball like no other college team.

How good were they?

That season the Razorbacks lost four games — half of them were to Houston and one was to Louisville in the NCAA Tournament. The other one was a 61-59 upset in the SWC Tournament by TCU.

In their second battle, Olajuwon had 15 points and five rebounds before fouling out. Kleine had 20 points and 10 rebounds, but he also fouled out in the 74-66 loss.

Walker added 18, but the Hogs were simply outmatched. The Cougars got 21 points from the bench. Arkansas had two.

The week of that game, Houston had been voted No. 1 in the nation.

The Razorbacks were a No. 4 seed in the NCAA Tournament, beat Purdue and then were eliminated by No. 1 seed Louisville.

The Cougars were rightfully a No. 1 seed and put away Maryland and Memphis State before winning the regional with an awe-inspiring 89-71 win over No. 3 seed Villanova.

The Final Four consisted of No. 4 seed Georgia vs. No. 6 seed North Carolina State, and No. 1 seeds Louisville vs. Houston.

The Wolfpack prevailed in the under card, then came the game of heavyweights. The Cougars were so convincing in their 94-81 win that sportswriters from all over the country were high-fiving on press row.

By the time Monday night rolled around, almost everyone had predicted an easy win for the Cougars.

But Houston Coach Guy Lewis took the team to The Pit — the games used to be played on college campuses, and this one belonged to the University of New Mexico — four hours before tip.

He installed a new offense, “The Locomotion,” which he ran when Olajuwon needed a breather. That turned Phi Slama Jama into Hop, Skip and Jump.

There was no shot clock back then, and the Wolfpack rebounded a missed free throw with 44 seconds to play and the game tied at 52-52. Houston’s defense forced Dereck Whittenburg to attempt a desperation shot with three seconds left.

The shot was all air, but Lorenzo Charles was alone to grab the shot and dunk it in before the buzzer, leaving Houston as the best team in college history to play in but not win the national championship game.

Olajuwon was named Most Outstanding Player. It was the last time a player from the losing team won that honor.