State of the Hogs: Catching up with Sweet P, the 'Dancing Razorback' 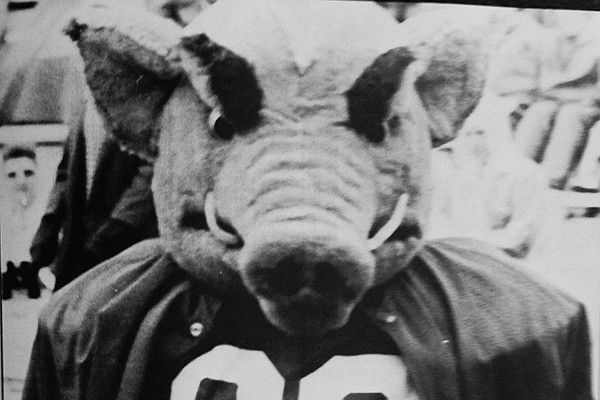 Gary White is shown in his Razorback mascot uniform during an undated game. White was Arkansas' first live mascot in the 1970s.

The phone interview was the fruit of perfect social distancing. Gary “Sweet P” White sent a Facebook instant message – quite a bit more than a “like” – that he loved my newly posted video.

And, I thought, it’s time to catch up with Sweet P on the phone. We all need a few smiles these tough days. Surely, the first – and best – Razorback mascot can deliver. And, he did.

“Yes, I can, brother,” Sweet P answered from his home in Las Vegas.

“Got lots of time to do that. I’m social distancing. I am at home with my wife and my grandchildren.

“I take a bike ride each day, but mostly I’m just in the house. If I see someone when I go out to the driveway, I sing, ‘Like a good neighbor, stay over there.’ We gotta manage this thing with humor.”

That’s what Sweet P said I was doing with my Facebook video, during a solo kayak trip down the White River. I recorded a message that fly fishing was a great way to practice social distancing.

White will be 67 on April 19. He still works as a security guard at the University of Nevada-Las Vegas.

“I don’t really work much,” he said. “I watch other people work at the Thomas & Mack (Center).”

“He’s from my conference,” White said. “He’s a great coach. He’s a national championship type coach. When my Razorbacks hired him, I said, ‘I already know this man, his wife and his beautiful family.’ It’s going to be great for my Razorbacks.

What they need is Sweet P to dance in the middle of Bud Walton Arena. I still have beautiful visions of his first dance as the Razorback mascot, given a scholarship by Frank Broyles to provide excitement in Razorback Stadium at halftime. Sweet P thinks it was in 1972.

They called him the "Dancing Razorback," but basketball star Dean Tolson soon dubbed him as just “Sweet P” and it stuck. As they say, his act was pretty sweet.

“Dancing can be magical. I wanted people to smile. That was fundamental to what I brought to Arkansas in 1972. No one was smiling and we need that right now more than ever.”

White brought his magical dancing to Razorback sports after delighting fans and players at Fort Smith Northside games. Fort Smith football coach Bill Stancil gave Broyles the advice to “recruit” White for entertainment and give him a scholarship.

“Bill Stancil told Frank Broyles that he did it for the gate receipts and I could do for the Razorbacks what I did for them,” White said. “No one really knew how it was going to work out.”

It worked out fantastic.

First, a costume had to be made. There were several attempts before a Razorback suit was secured from Disney.

“It was horrible,” White said. “Funny thing, it was the first tailor-made suit I owned, but the head didn’t have any eye holes and nowhere to draw a breath. I cut holes in it.

“But you could only breathe a little. Dancing, you need to breathe. I figured out how long I could breath and that’s how I timed my routine.

“That first routine, when I went down at the end, I just stayed there for a while. I had passed out. I wasn’t resting, I was out, out of breath. That’s right, I passed out on the 50-yard line.”

When he got up, the crowd was roaring. He left for the dressing room as the team emerged.

“I had to get dressed with the players,” he said. “Frank Broyles was coming out. He put his hand on my shoulder and said, ‘I guess you get to stay. They like you.’ I really had felt some pressure. I didn’t know how it would go. He didn’t know. It was an experiment.

“When he put his hand on my shoulder and said that, it was still the coolest feeling ever. The screams from the fans were another pinnacle, but getting that affirmation from Frank Broyles was amazing.”

White didn’t always fit as snugly as his uniform. There were some blow ups with Eldon Janzen, the legendary band director.

“We butted heads,” he said. “He wanted me to rehearse my routine at band practice. I told him, ‘Black people don’t rehearse.’ I just told him, ‘Keep your band off the 50-yard line. That’s all mine.’

“So he took issue with me. I got called in by Frank a few times about my conduct. He said, ‘You represent the University of Arkansas.’ I got it. I had a lot of support, but I knew I had to do certain things differently.”

There was incredible support from athletes, football and basketball.

“They are life-long friends,” he said. “I’ve been here in Vegas for most of my life, the last 30 working at UNLV. So many former players have been through here and I spend time with them.

White didn’t just wear it, he made it come to life with his incredible dance moves. There may be some dancing when old friends arrive. 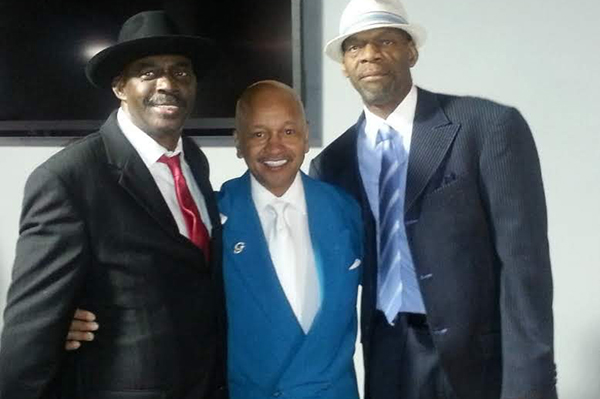 “Oh, yeah, man,” he said. “I still dance. I have maintained my fluidity. That’s what you need for dancing. I can’t go as long, but I can still dance.”

For the old timers, there needs to be no explanation. Sweet P danced like James Brown in a pig suit.

“That’s it, man,” he said. “James Brown was my inspiration. That type of dancing evolved into what they call break dancing. I was doing that before it really happened across the country.

“Then there are my splits. James Brown did that. I could do the splits, then pull myself back up with a hand to my shirt.”

There was dancing away from the games.

“Yes, players complained to me that they were in the locker room at halftime and didn’t see it,” he said. “Ivan Jordan would ask for a repeat show. I’d do it for them.”

The routines varied. So each show might be different.

“Dance is expression,” he said. “I tell people all the time, you can dance, just jump up and down. That’s expression. Sway back and forth. Anyone can dance. You just have to express your feelings. You feel something, put it in.

“That’s what I did. And, I saw people in the stands move with me.”

That first dance at the Texas game was interesting because White made eye contact with a youngster.

“I’d pick people out and focus,” he said. “Sometimes it might be with an older person. But that game, I saw a young boy. He had a stuffed Razorback toy. He made it dance to the moves he saw from me.

“When you see that, it gives you more energy to perform. You need that energy.”

White keeps an eye out for any Razorback gear in Vegas.

"If I see someone with a Razorback cap or T-shirt, I'm going to say something like, ‘Hey, I'm for Fort Smith and I'm a Razorback,’" he said. "If I'm in my car and I see an Arkansas license plate, I roll down my window and holler, every time.

"I get lots of fun reactions. This happens all the time, too. I had a girl roll down the window and tell me she was from Conway, then she called the Hogs."

When he watches Razorback sports on TV, he wants to see more energy from the mascots.

“Heck, they got a bunch of them running around now,” he said. “I get it, Three Little Pigs. But they aren’t doing anything. I want to see a little more. I hear that from some other fans.

“Now, I could help them there. I have studied mascots. I have seen a bunch come through (UNLV’s games) here. I was talking to the Bulldog from Fresno State. I said, ‘Give me that head. Let me see inside.’

“When I looked in, he had a fan in there, a dadgum fan. There was a football helmet for support. I didn’t have anything like that. That Bulldog head was fantastic. These mascots now, they got it easy.”

Could he still dance at a game?

“Heck, yeah, brother,” he said. “It might not be long. But I’d give you 30 seconds of vintage Sweet P, nothing but Sweet P.

But they all smiled.