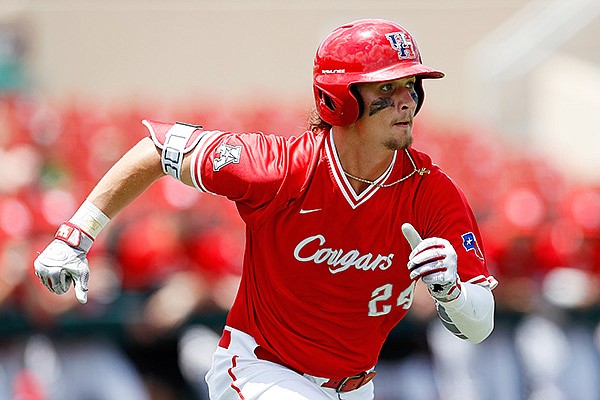 Houston's Lael Lockhart Jr. (24) runs down the first base line during an UNLV at University of Houston NCAA college baseball game, Sunday, May 5, 2019, in Houston. (AP Photo/Aaron M. Sprecher)

The 6-2, 215-pound native of Friendswood, Texas, will have one season to play for the Razorbacks after the NCAA restored a season of eligibility for baseball players that was lost due to the covid-19 outbreak. Lockhart, a left-handed pitcher and switch hitter, was a senior at Houston this season and is joining the Razorbacks as a graduate transfer.

Lockhart was Houston’s No. 1 starter for most of the past two seasons. This year he posted a 1-2 record and 4.58 ERA in four starts before the season was suspended in March.

In 17 2/3 innings, Lockhart struck out 19 batters and walked eight in starts against Youngstown State, Stanford, Texas State and Arizona.

As a junior, Lockhart was 4-6 with a 3.58 ERA in 15 starts. He had 73 strikeouts and 31 walks in 83 innings, and was named the American Athletic Conference pitcher of the week after striking out a career-high 9 batters in 6 innings at Wichita State.

Lockhart played mostly in the field for his first two seasons at Houston. He started 52 games as an outfielder and first baseman as a freshman in 2017, when he batted .276 with 11 extra-base hits and 27 RBI.

Lockhart is the second former player from the AAC to transfer to Arkansas this offseason. Brady Slavens, who played outfield at Wichita State as a freshman in 2019, signed with the Razorbacks following a partial season at Johnson County (Kan.) Community College, where he was leading all junior college hitters with 14 home runs and 47 RBI through 22 games at the time the season was suspended.

WOO PIG! Excited to say I’m committed to @RazorbackBSB Ready to be apart of something special! pic.twitter.com/dTDEROBZBE