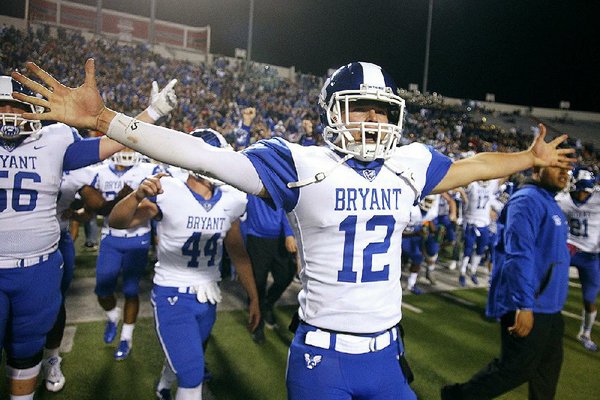 Bryant quarterback Austin Ledbetter celebrates after the Hornets’ 27-7 victory over North Little Rock in the Class 7A state championship game at War Memorial Stadium in Little Rock. Ledbetter returns for his junior season, and the Hornets open as the No. 1 team in the Arkansas Democrat-Gazette’s overall rankings.

FAYETTEVILLE — In a normal situation, this would be a busy time for Arkansas baseball commit Austin Ledbetter of Bryant.

Ledbetter (6-2, 205 pounds), who as a quarterback led his team the Hornets to their second consecutive Class 7A state football title in December, would normally have gone through spring football practice and been the process of leading his team toward the state baseball playoffs.

But concerns due to the coronavirus pandemic wiped out both of those things for Ledbetter, who is hoping to play both baseball and football at Arkansas.

“It’s been since I was a little kid that I have not been playing baseball this time of year,” Ledbetter said. “I have played spring or summer baseball almost every year of my life. It has been pretty tough.”

Ledbetter was planning to be part of the Arkansas Sticks baseball program again this summer and getting in a lot of 7-on-7 action.

“I had a full schedule of football and baseball set up. We’ll see how much of it gets to play out.”

Ledbetter had planned to concentrate on baseball at Arkansas after committing as a freshman, but his love for football has grown during Bryant’s back-to-back championship seasons. He now is considering playing two sports in college.

“I am for sure considering it,” Ledbetter said. “I love starting in spring and going all the way to the end of December. It is just a different feel on Friday nights and I just love the atmosphere of playing football and playing for state championships these last two years.”

He has developed a good relationship with new Arkansas football coach Sam Pittman and his staff.

“I like their energy,” Ledbetter said. “I like how they carry themselves. It just feels like they are a big family. I really like that because I feel like that is how we are at Bryant. All the players and coaches get along great.”

Ledbetter evaluated his strengths and weaknesses.

“I think I need to improve a lot on my speed and my physical appearance,” Ledbetter said. “But I think other that, my reads pre- and post-snap, my understanding of the game and my understanding of defensive backs and what the defense is trying to accomplish against use and figuring things out on the fly are really good.

“My arm is getting stronger every year and I am able to make all the throws and put it on the money.”

Ledbetter, an infielder and pitcher, plans to play baseball at Arkansas for coach Dave Van Horn.

“Arkansas is also going to be good under Coach Van Horn,” Ledbetter said. “(Hitting) Coach (Nate) Thompson has also done a great job with their hitting. It has picked up in the last couple of years since they hired him. He is doing a great job.

“I like being around those guys, too. They are great people. Baum-Walker Stadium is one of a kind and it is going to be great to play there and also football, too, maybe.”