THE RECRUITING GUY: Hogs connect with 6-11 center on virtual tour 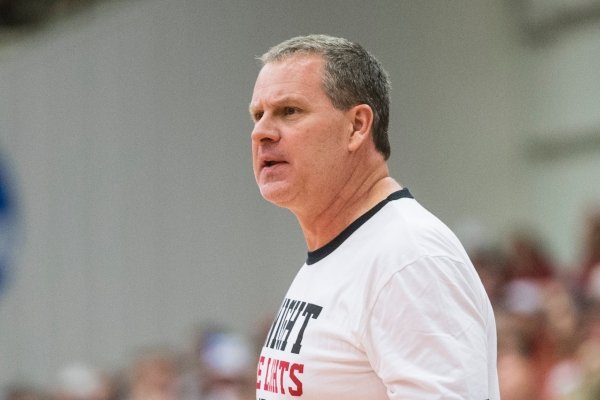 The first five minutes of the tour were devoted to talking to Musselman, then Moser showed him the facilities the Hogs use and the apparel they wear.

"I feel like it was really organized. I feel like they care about their players, and they're going to put them in the best position for success."

He appreciated the coaches' enthusiasm.

Tchikou averaged approximately15 points and 10 rebounds a game as a junior. ESPN national recruiting director Paul Biancardi rates him the No. 13 center in the nation.

"At 6-11, he is a big-time athlete with length and a thin frame," Biancardi said. "There is no doubt that he is best in the conversion game right now. Runs very well, finishes, rebounds and blocks shots with his physical measurables.

"Skill level shows flashes of impact. Defensive potential is unlimited. His game effort and his overall consistency must be more evident. His upside is outstanding."

"We plan to have another visit probably next week," Tchikou said.

While he appreciated the virtual tour, an in-person visit is preferable.

"At the end of the day, it's just like a virtual call, so it's really hard to really envision yourself just by a call," he said. "When you're not there, you don't really have a feeling, like if I'm there I feel this, I see this. It's hard. The only thing you can judge is how involved the coaches are in terms of the virtual visits, and that's the thing that really makes you feel special."

The NBA backgrounds of Musselman, Moser and assistant Corey Williams are a boost to the Hogs' pursuit of Tchikou.

"They showed me a presentation about the coaching staff and explained to me that where I want to go, that's where they've been," Tchikou said. "It's easy to talk to me when they've been there and they know what it takes to get me there, so the presentation, that's what it was telling me.

"They went through every coach and explained every coaches' background. So that makes you more comfortable about them because they've been there because they know what they're talking about."

Tchikou, who moved to the United States from Paris in the fall of 2018, didn't understand English until after arriving in the U.S. Despite the challenges of learning a new language, his accent is minimal.

"I was just very thirsty to learn, and I don't like when people talk and I can't catch what they're saying," Tchikou said. "You know sometimes you feel embarrassed because someone is talking to you, and you don't really know what they're telling you or what they're trying to ask you or trying to tell you. I took my frustration as motivation to be thirsty to be able to understand."