Petrino, Hogs rolled the dice and struck it rich 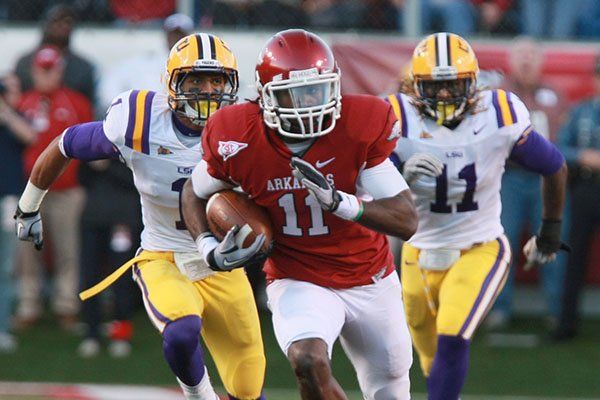 Cobi Hamilton outruns two LSU defenders for a touchdown on the final play of the second quarter during a game Saturday, Nov. 27, 2010, in Little Rock.

FAYETTEVILLE -- One of the most impactful games for Arkansas football since the 1964 national championship season featured perhaps the most iconic play of the Bobby Petrino era.

Some of the crowd at Little Rock's War Memorial Stadium might have thought the Razorbacks would run out the clock at their 20-yard line with six seconds remaining in the first half of a 14-14 game. Certainly CBS analyst Steve Beuerlein expected Arkansas to settle for the halftime tie, and he said as much.

The big play came just after referee Steve Shaw instructed the clock operator to add three seconds to the game clock to give the Hogs six seconds after LSU, which was hoping to drive into field goal range seconds earlier, punted into the end zone.

"Either way, you're going to see Ryan Mallett take a knee, I'm sure, here," Beuerlein said.

Arkansas did not take a knee.

Mallett completed a 30-yard pass down the right hash to sophomore Cobi Hamilton at the 50-yard line. At that moment, LSU defensive back Karnell Hatcher crashed into teammate Morris Claiborne, and both of them missed Hamilton while falling to the turf.

Hamilton gave a strong juke at the LSU 40 to turn cornerback Patrick Peterson around. Hamilton quickly veered to the left hash as teammate Jarius Wright shot in front of him and screened Peterson off, starting at the 30, all the way to the end zone.

Hamilton raced into the end zone ahead of safety Eric Reid as Peterson fell at the goal line while Beuerlein chuckled on the broadcast.

"I'm not going to predict anything anymore," Beuerlein said.

Hamilton's 80-yard touchdown catch was his second of the day, following an 85-yarder down the left sideline just a few minutes earlier. Hamilton also recovered an onside kick just before getting hammered with 1:58 left in the game.

The Razorbacks would make another bold, aggressive statement early in the fourth quarter on their way to a victory that essentially clinched the program's one and only Bowl Championship Series berth.

Leading 21-20 and facing a fourth-and-3 snap at the LSU 39, Arkansas called timeout. Instead of sending Zach Hocker out for a 56-yard field-goal try, Petrino rolled the dice.

Joe Adams perfectly executed a hitch-and-go route from the left slot against defensive back Tyrann Mathieu and the Arkansas line protected long enough for Mallett to lay in a touch pass to Adams for a 39-yard touchdown to create separation at 28-20.

"We didn't come to paint," Petrino said, echoing one of his favorite lines. "We came to win the game."

Mallett, who snapped Clint Stoerner's school record for touchdown passes in a season on the first to Hamilton, said the Razorbacks had been repping that play since the LSU game the previous year. Mallett, the 6-7 junior, would declare for the NFL Draft after the season with a school-record 62 career touchdown passes, a figure that would be eclipsed by Brandon Allen (64) five years later.

Mallett had a huge day, passing for 320 yards and three touchdowns, and Knile Davis added 153 rushing yards against the top defense in the SEC.

LSU Coach Les Miles was as dumbstruck by Arkansas' lightning touchdown just before halftime as the TV crew.

"I would have liked to have had the [field goal] before the half, and who would have thought they would hit the long ball like they did for the score?" Miles asked. "Certainly not I."

The game featured late drama after LSU pulled within 31-23 on a field goal with 1:58 left in the game.

Arkansas had a chance to run the clock down to about 30 seconds, but Shaw stopped the clock for an injury timeout with 1:40 remaining when Davis stayed down on the field for a couple of extra seconds on a second-down play. After the third-down play, Petrino fumed on the sideline and demanded an explanation from Shaw.

Reporters were already down on the field at that time and got to see the heated exchanges between Petrino and the officials. Meanwhile, Bobby Petrino Jr., the coach's son, was giving some lip to the officiating crew, causing one official to warn if he said anything else he would be ejected from the game.

Dylan Breeding punted with 57 seconds remaining, and LSU took possession at its 6 with 49 seconds left. On second down, blitzing defensive back Andru Stewart knocked the ball loose from quarterback Jordan Jefferson at the goal line and Freddy Burton recovered at the LSU 1.

Mallett finally took a knee a few seconds later and the Razorbacks had a huge victory to reclaim possession of the Golden Boot Trophy. Arkansas, which won its sixth consecutive game since a controversial loss at No. 2 Auburn, would be ranked No. 8 in the final BCS regular season poll and wound up accepting a bid to its first Sugar Bowl in 31 years.