Henry excited to see what Chargers can do on offense 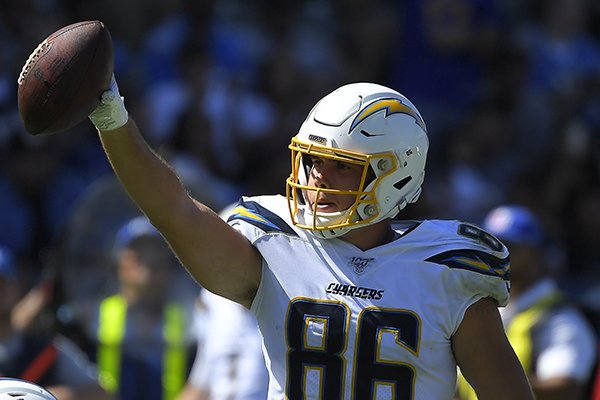 Los Angeles Chargers tight end Hunter Henry gestures with the ball after making a catch during the second half of an NFL football game against the Indianapolis Colts Sunday, Sept. 8, 2019, in Carson, Calif. (AP Photo/Mark J. Terrill)

LOS ANGELES — They had just lost for the sixth time in seven games and were trotting off into an uncertain winter following a deflating 5-11 finish.

All that, plus the possibility of never again seeing Philip Rivers in a Chargers uniform.

"I wasn't a big fan of it because Philip's my guy," tight end Hunter Henry recalled recently of the well-founded speculation that Rivers would be let go. "It was sad, definitely, to see him run off for that last time."

The Chargers most certainly have moved on, with Tyrod Taylor now the projected starter and rookie Justin Herbert, the No. 6 overall pick, being groomed to take over as their next potential franchise quarterback.

But there's no denying the void left in late December, when his final pass for this organization was intercepted to seal a 31-21 loss in Kansas City to the eventual Super Bowl champs.

"It still hasn't hit me, I don't think, because we really haven't got back together (as a team)," Henry said. "I think it will be even weirder when we're all back together and he's not there."

Henry called Rivers "one of my good friends" and noted how the two "talked nonstop" during their four years together. They also connected 136 times for 1,709 yards and 17 touchdowns.

Henry's next reception will be the first of his NFL career from a quarterback other than Rivers. But, while there's lingering sadness in what's now gone, Henry admitted there's fresh hope in what awaits.

The Chargers are about to enter an era mostly foreign to the franchise. Rivers, now with Indianapolis, is an old-school drop-back quarterback and, as such, presents no running threat. That's not the case with either Taylor or Herbert.

Their ability to make plays on the ground will allow for bootleg and read-option looks. Coach Anthony Lynn said the offense might also feature plays from the pistol formation.

"I'm not going to downplay Philip at all," Henry said. "He was unreal and a Hall of Fame quarterback. But, obviously, it opens our offense up a little bit more. You see all these quarterbacks, their escapability in the pocket.

"(There are) so many different things that you can do with a mobile quarterback that can open your offense. (I'm) looking forward to seeing that aspect of our offense grow."

Shane Steichen, who was promoted to full-time offensive coordinator after the season, said the Chargers will structure their scheme around the abilities of their quarterback.

The different look — plus changes brought by new offensive line coach James Campen — is expected to help an offensive front that has been largely rebuilt in recent weeks.

In 2019, Rivers struggled with turnovers playing behind a line that was wildly inconsistent. Lynn admitted in December that the situation probably played prominently in Rivers' shaky decision making and 20 interceptions.

Along with replacing the on-field production, Henry said the 2020 Chargers will have to find new leadership with Rivers gone. The veteran quarterback was famous — and occasionally infamous — for his vocal interjections.

"I think different guys are going to have to step up," Henry said. "I know I'll have to step up leadership-wise. He kind of took that role on for everybody. He was the ultimate leader."

This locker room also has lost Brandon Mebane, Russell Okung and Thomas Davis, each an experienced voice respected by teammates. Mebane and Davis were released and Okung was traded.

So, when the Chargers do reconvene, they clearly will be a group in transition, while trying to win at the same time.

Henry said he's just ready to start, even if that means performing in a stadium full of empty seats.

"I'm open to playing games without fans," he said. "It wouldn't be the best, most ideal situation. But I'm definitely OK with it. … I'm down, definitely. I miss sports."