On this date in Razorback history, May 6 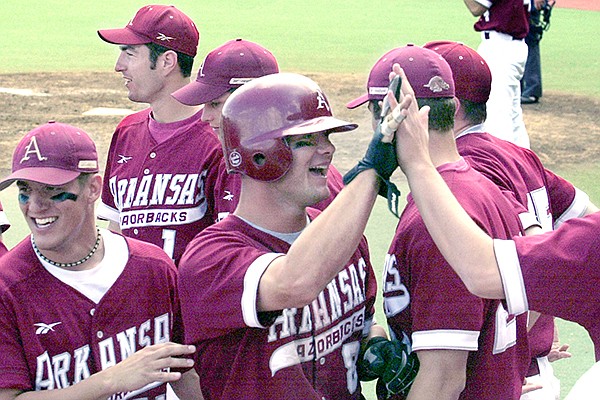 Arkansas' Michael Conner (with helmet) is greeted after scoring during the bottom of the sixth inning of a game against LSU on Sunday, May 6, 2001, in Fayetteville. The Razorbacks won the game to complete a series sweep of the No. 1 Tigers.

Arkansas finished off a stunning sweep of No. 1 LSU with a 4-3 victory at Baum Stadium in the Hogs’ penultimate series of the year.

Kyle Washburn’s two-run double in the sixth inning provided the winning runs for the Razorbacks, who would finish 27-29 and out of the postseason. LSU would advance to the NCAA Super Regionals before falling 2 games to 1 against in-state rival Tulane.

LSU had not been swept in a conference series since March 22-24, 1996, a span of 55 consecutive series. The Razorbacks would post another sweep of the Tigers three years later, this time at Alex Box Stadium in 2004.