State of the Hogs: The next big thing? 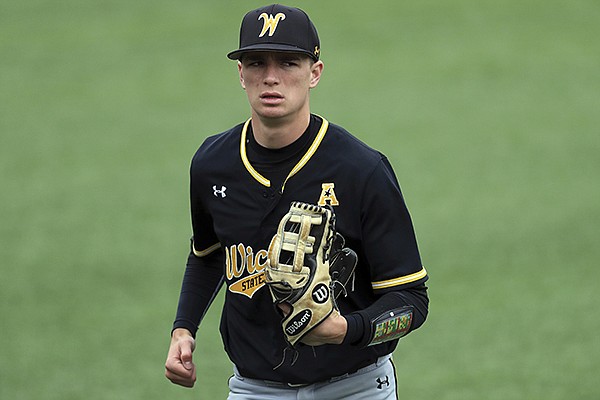 Arkansas baseball fans may have problems trying to figure out if Brady Slavens reminds them more of Heston Kjerstad or Robert Moore.

Oh, what a delightful conundrum.

Slavens signed with Arkansas this spring, although he’s eligible for the MLB Draft after his second year of college was spent at a junior college.

“There is a good chance I’ll be at Arkansas,” Slavens said Thursday. “I guess if I’m drafted and the money is right I could sign, but there are probably only going to be five rounds (of the draft) and I’ll go to Arkansas.”

It would be his third school in as many seasons and he’d be classified as a sophomore.

“At least that’s what I think I’d be called, right?” he said. “This season in junior college won’t count.”

How about that, the national JUCO player of the year doesn’t have to count it as a season?

At Arkansas, Slavens will be reunited with Moore, an old friend from the Kansas City area. They played against each other in high school, but in some cases were on travel squads together.

They also have in common that they skipped their senior season of high school to play Division I baseball. Slavens was a January enrollee in 2019 at Wichita State. Moore arrived at Arkansas in January this year.

Slavens committed to Wichita State coach Todd Butler, a former Dave Van Horn assistant, after his sophomore year at Olathe (Kan.) Northwest. He transferred to Johnson County, near his hometown, after Butler was fired.

“I love Coach Butler and he’s one of my favorite people,” Slavens said.

But things weren’t great at Wichita State in his one semester. He played outfield, third base and a little shortstop. He hit just .212 in 46 games, but did amass 23 RBI and scored 20 runs. He hit one homer.

“I’m glad I did it, but it was learning by failure,” Slavens said. “There were a lot of things that didn’t really work that year at Wichita.

“It started with me moving into a dorm with no baseball players. I just wasn’t around the team and they didn’t really accept me. I’d say it was difficult.”

It was an incredible turnaround at Johnson County. In just 22 games, Slavens cracked an NJCAA-leading 14 homers and 47 RBI. He scored 25 runs.

Slavens was Jayhawk Conference player of the week three straight times, including in Week 5 when he also won national player of the week. That was when he hit .636 with 4 homers and 15 RBI to lead the Cavaliers to a 4-0 week.

Slavens said nothing changed in his hitting approach between his first year at Wichita State and his awesome start at JCCC.

“I just didn’t think as much,” he said. “I just tried to square the ball up and drive it. The less you think, the better you do.

“I think what changed was the culture. I was in a fun atmosphere. It wasn’t fun at Wichita. The culture for me wasn’t right. It’s not surprising: if you don’t have fun, you are not going to play well.

“It was fun at Johnson County, and I know it’s going to be fun at Arkansas. I know some of the players and I watched them on TV. They were having fun.”

Van Horn has always worked to make the culture right. And, while the Arkansas coach can be serious, Slavens said he’s noticed that it’s a fun atmosphere at Baum-Walker Stadium.

“I’ve been there, but not for a game,” he said. “It ended this season before I could get down there.

“But I watched as much as I could. I know Robert had fun. He’s a high-energy guy and that’s the way I am, too.

“There are times to be serious with baseball, but baseball is a game and you should have fun playing games. I do try to always make it fun.

“Playing in junior college, there just were not many people at the games. So you try to give your teammates some energy and make it fun.”

That’s why Arkansas fans will see some of Moore in Slavens. But asked to compare himself to another player, Slavens said it’s probably Kjerstad.

Both throw right handed, but are lefty swingers.

“I don’t have that big leg kick like Heston, but I do have a little one,” Slavens said. “I would say we are a little bit alike there.

“I watch his game and like it a lot. He’s a guy who squares up a lot of balls and is consistent.”

Slavens is a gap-to-gap hitter, with plenty of power. He said he does not think home runs, but knows the power is there.

“I just try to hit the ball hard,” he said. “I didn’t hit home runs at Wichita State, but I knew they were there. It was just a matter of time when it was going to happen.”

And, he knows home runs have been flying out of Baum-Walker Stadium, especially since Nate Thompson arrived as hitting coach in 2018.

“I think I fit what Coach Thompson tries to coach, gap to gap,” Slavens said. “I know what the alleys are (at Arkansas' home stadium)."

The right-field fence at Baum has been shortened twice under Van Horn, including last year when the construction work began for the new training facility and clubhouse south of the stadium.

At 312 feet, Arkansas' right-field fence is the second-shortest in the SEC.

“I knew (the fence) had come in before,” Slavens said. “But I didn’t know they moved it in last year, too. I know it’s one of the smaller parks (in the SEC).”

Slavens likes everything about the Arkansas program. Perfect Game’s top-rated high school shortstop in Kansas had interest in the Razorbacks when he was being recruited, but Thompson was newly hired at Arkansas when Slavens pulled the trigger on Wichita State.

“I think Coach Thompson came to see me at a (show case) the week before I committed,” Slavens said, "and we talked. So it was interesting when he texted me this spring because his name showed up in my phone. He was still in my contacts.

“I have always liked Arkansas. They have a great fan base and great game atmosphere. I know baseball is a big thing there and I understood what baseball is all about there.”

With a prior relationship, the recruiting went well.

“Brady is a player that we had talked to a little bit when he was in high school out of Olathe Northwest and had some interest in,” Thompson said. “We just never got around to getting more serious about things.

"He went to Wichita a semester early and played quite a bit as a freshman. Then a coaching change happened and I think he found out he wanted to go to junior college, so he went close to home.”

“He’s an athletic, kind of twitchy guy,” Thompson said. “He has some good height and size to him. I think he’s added quite a bit of strength since high school. He had kind of a slender build back then.

“I’m not saying he’s big or anything like that, but he has good bat speed and good power. The numbers at Johnson County proved that this spring. He was leading the nation in extra-base hits and home runs when the shutdown happened.”

The shutdown extended into the way Slavens could practice once home.

Kansas and Missouri both shut down gyms and batting cages all around the Kansas City area.

“Basically, everyone was quarantined at home,” he said. “I didn’t have any home weights. I did set up a net in the backyard and hit off a tee. I found some old workout videos. That’s about it.”

That changed two weeks ago with a visit to a family home in Sacramento, Calif.

“The (batting) cages are open,” Slavens said of California area facilities. “And, there is a set of weights at home. I’m trying to stay in shape. And the weather here is great.

“I’d lost a couple of pounds since the quarantine, but I’ll get it back.”

With lots of free time, he’s discovered that he doesn’t have any hobbies.

“Lately, there’s not been much to do,” he said. “So I’ve tried to watch a lot of (old) baseball games. It makes me miss playing even more.”

Asked for more of his free time habits, Slavens had to think.

“I guess I’d say watching Kansas basketball,” he said. “I grew up a KU fan and they’ve been good for so long. I watch a lot of college basketball.”

But there is more to Slavens than that. He grew up in church. His parents, Ryan and Jenn Slavens, are lead pastors at Antioch Church in Overland Park, Kan.

“I feel like they’ve been there my whole life,” Slavens said of Antioch. “It’s awesome. Faith is so much a part of our family and me. I have a strong faith and that’s helped me stay humble and grounded.

“I have someone to look up to (in his parents) and probably being son of pastors probably does put a lot of pressure on you. But it’s awesome.”

The family is excited about his decision to play at Arkansas.

“Really, they loved it,” Slavens said. “It’s not too far, about a four-hour drive. They will be able to see me play.”

Where he’ll play in the field is not for sure. Slavens said it doesn’t matter.

“I’d never played outfield until last year so I can adapt,” he said. “The coaches told me they project me as a corner infielder, but I’ve played shortstop and second, too.

“I’ll be glad to play anywhere they think I can help the team. I think I might end up at third, where I was playing this year. But it doesn’t matter.”

That’s why Thompson knows it will work out.

“We’re excited to have him,” Thompson said. “He’s a good kid from a great family.

“We like the fact he’s a left-handed hitter and an athlete and can play on the infield at a lot positions."

Thompson said Slavens can play "anywhere on the dirt."

“He may end up growing into more of a corner infielder rather than a middle infielder," Thompson said. "But that remains to be seen.

“Coach Van Horn likes to work out guys at all different spots throughout the fall and have them take ground balls, work on turning double plays at different spots. I’m sure he’ll work out some everywhere in our intra-squad games.

“For us, it’s all about putting the best team on the field, so versatility is good when it comes to that.”

Someone that reminds of Heston Kjerstad and Robert Moore will be on the field somewhere.