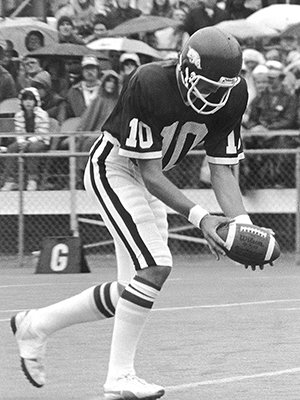 Steve Cox earned 10 combined letters in football, basketball, and outdoor track and field at Charleston High School in the 1970s. He played college football at Tulsa and Arkansas and in the NFL for eight years, where he helped the Washington Redskins to a Super Bowl championship.

FAYETTEVILLE -- University of Arkansas football fans can probably knock this trivia question out with ease: Which Razorback has the highest career punting average?

But do they know the interesting nugget of NFL history associated with that record holder's pro career?

Steve Cox had a 45.2-yard punting average in his two years as an All-Southwest Conference player at Arkansas in 1979-80. That's nearly a yard better per punt than the 44.4-yard averages for Greg Horne and Steve Little, who are tied for second place on the Razorbacks' career list. A little more on Little later.

Cox, now a member of the UA board of trustees, was on the three-man search team with Hunter Yurachek and Jon Fagg that selected Sam Pittman to head the Hogs' football team in December. A native of Charleston, Cox was the first Razorback selected in the 1981 NFL Draft, taken by the Cleveland Browns in the fifth round.

In Cox's second-to-last season in the NFL with the Washington Redskins in 1987, he was needed as the backup place- kicker in the season opener against the Philadelphia Eagles after Jess Atkinson injured an ankle.

Cox, a regular punter and kickoff man throughout his NFL career, made three extra points in that game, then came on to kick a 40-yard field goal to provide the final points in the Redskins' 34-24 victory at RFK Stadium in Washington, D.C.

Cox's 40-yard boot nearly 33 years ago on Sept. 13, 1987, stands as the last field goal attempted by a straight-on kicker in the NFL. All NFL kicks have been soccer style since that day.

The 6-4 Cox, now a businessman in Jonesboro, said he was aware he held that distinction at the time because he knew he and one-time Washington teammate Mark Moseley were the last two straight-on kickers left in the league for a period of time, and Moseley retired in 1986.

"People mentioned it to me, but it was only in passing," Cox said.

Then Sports Illustrated published a feature story on Moseley in July 2018 that mentioned Cox's feat in the second paragraph.

"It wasn't a big deal until Sports Illustrated and people started talking about it," Cox said. "We're dinosaurs. We're extinct. We don't have any more straight-on kickers. So that will always be the last straight-on kick."

Some of Cox's friends and fans have suggested the Pro Football Hall of Fame should request a pair of Cox's flat-toed boots to commemorate the end of that kicking style, but it hasn't happened yet.

Another Cox factoid: His 60-yard field goal for the Browns in a 1983 game at Cincinnati is the second-longest for a straight-on kicker. The longest is Tom Dempsey's 63-yarder for the New Orleans Saints in 1970 that stood as a cherished NFL record for 43 years.

One of Cox's prized possessions is a picture of him as an 11-year-old posing with Dempsey as part of Cox's run as a prodigious participant in the old Punt, Pass and Kick competitions.

"I always did well in Punt, Pass and Kick," Cox said. "The only reason I'd get beat is because I couldn't throw very well. But I could out-punt and out-kick everyone.

"I was a late bloomer. I had to make up a lot on kicking and punting because I couldn't throw the ball but about 40 yards."

Cox was selected as the starting punter on the Arkansas Democrat-Gazette's all-time Razorbacks in the pros team last month. He joined Little and Pat Summerall as the only kickers on the UA's All-Century team in 1994.

Cox, who owned a healthy 42-yard career punting average in eight NFL seasons, attempted only 15 field goals in his pro career, virtually all of them from long range. He made six of them, three from 57 yards or longer.

But when Atkinson was taken out on a hit by the Eagles' Andre Waters in the 1987 opener, Cox got the call from coach Joe Gibbs, a one-time Arkansas assistant coach. Cox remembered Eagles coach Buddy Ryan commenting about the kicking situation afterward.

"Buddy said after the game usually when they knock out a kicker or a punter, you'd not expect they'd have a [backup] guy that could kick," Cox said.

The Redskins signed Ali Haji-Sheikh the next week, and Cox went back to his normal duties.

Cox could certainly kick, as proven by making multiple field goals of 50-plus yards in high school for the Charleston Tigers.

His father, the late Joe Cox, had a eureka moment for his son, partly based on the event that ended his football career. Joe Cox suffered a major knee injury in his freshman season at Northwestern (La.) State. With no medical hardship scholarships available at the time, he joined the Air Force.

When Steve Cox was 8 years old, his father, who called him "Bud," came to a fortuitous conclusion.

Nearing the end of his high school career, Cox had his sights on heading to Fayetteville to play for Frank Broyles and the Razorbacks, where Little, a consensus All-American in 1977, was making headlines for his kicking prowess.

"Arkansas came down and offered me a chance to walk on and wait two years and play behind Steve," Cox said. "I just didn't want to do that. I felt like I was too good to sit around."

So Cox signed with Tulsa, which had a series going with the Razorbacks, where he could kick as a freshman.

"I come back to my home state," he said. "My sister [Debbie] was a majorette at Arkansas. I came to every game up there. I watched Bill McClard kick, all these guys. And I dreamed about being a Razorback like you would not believe."

Cox would eventually get that chance, but not before he broke Razorback hearts in Broyles' final season.

Cox kicked three field goals in the Golden Hurricane's 9-3 victory over the No. 12 Razorbacks at Razorback Stadium. Cox went 3 for 3 on field goals from 39, 28 and 40 yards. Little converted a 61-yard field goal for a then-school and SWC record, but he missed three other tries, including two attempts from 56 yards.

"We beat Arkansas 9-3 on three field goals from Steve Cox, that little kid from Charleston," Cox said. "That kind of put me on the map."

That upset remains Tulsa's last victory over Arkansas to this day, with the Razorbacks winning the past 19 meetings in a row.

The following year, Lou Holtz's Razorbacks stuffed Tulsa 37-3 and the Hurricane's only points came on Cox's 58-yard field goal. Cox didn't get near as many field-goal opportunities his second year at Tulsa, so after sitting out in 1978 as a transfer, he joined the Razorback roster for his final two seasons.

Even so, he earned his keep as a punter and kickoff guy, as Ish Ordonez, the primary placekicker, was a second-team All-American in 1979.

Soccer-style kicking -- prevalent in the NFL since the late 1960s and early 1970s with the Hungarian brothers Charlie and Pete Gogolak, along with Jan Stenerud and Garo Yepremian leading the way -- was already in vogue in college football during Cox's career.

His teammate Ordonez kicked in the new style, but Cox did not convert.

Cox was only 2 for 6 on field-goal tries with the Browns in four seasons, with the makes from 58 and 60 yards. He got some advice early in his pro career from former Browns great Lou "The Toe" Groza, whose name graces an annual award given to the best kicker in college football.

"When I got drafted by Cleveland and went to mini-camp, he came out and I got to meet him, and ... Mr. Groza gave me great advice," Cox said.

The best thing Groza ever told him, Cox said wryly, was this: "If you miss a field goal, you take your right hand and put it on the holder's shoulder, and you take your left index finger and you shake it in his face and you tell him, 'That's the greatest hold I ever had, and I'll never miss another one.' The whole time you're saying it, you shake your finger at him. All 80,000 fans and everyone on TV will think you got a bad hold," Cox said with a laugh.

Joe Cox's advice loomed large for his son one more time in the strike-affected 1987 season. Steve Cox was leading the NFL in punting average through two games, but after the strike wiped out four games, he struggled in the first two games back. It got to the point where Gibbs called Cox into his office to say he had to rebound or the Redskins would bring in another punter.

Cox said he asked Gibbs whether his father could fly in to instruct him.

"He said, 'Get him on the next flight,' " Cox said. "My father flew up here and spent the next two days with me practicing and I never looked back.

"He could climb inside my mind. I listened to him and trusted him, and he knew my style. He knew what worked for me. He watched me since I was eight years old and he knew me like the back of his hand and I trusted him. So that was the year I got a Super Bowl ring."

It was also the year straight-on kicking Steve Cox cut out his own little slice of NFL history.