Ex-Hogs assistant pops up in 'Dance' 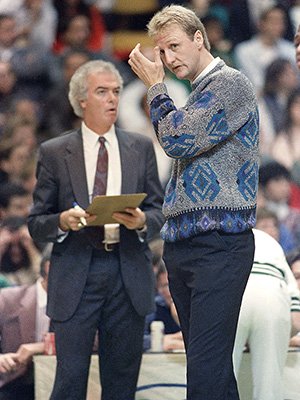 Boston Celtics superstar Larry Bird appears in street clothes near the team bench at Boston Garden at night, Friday, Nov. 18, 1988 as Celts head coach Jimmy Rodgers, left, with clipboard in hand makes some last-minute game plans prior to the start of NBA action against the Washington Bullets. (AP Photo/Elise Amendola)

FAYETTEVILLE -- Watch The Last Dance closely and you'll see glimpses of a University of Arkansas assistant basketball coach from nearly 50 years ago.

Jimmy Rodgers hasn't gotten much air time in the ESPN documentary series about the Chicago Bulls' NBA championship teams led by Michael Jordan -- a shot here and there on the bench or in the locker room -- but he was a key member of Coach Phil Jackson's staff from the 1994-95 through 1997-98 seasons.

"Jimmy was one of the finest assistant coaches ever to work in the NBA," Jackson said in More Than A Game, a book he co-wrote with Charley Rosen published in 2003.

Joe Kleine, an All-Southwest Conference center at Arkansas in 1984 and 1985, played for Rodgers in Boston when he was the Celtics' head coach and then again in Chicago during the 1997-98 season when the Bulls won their sixth NBA championship.

"I thought Jimmy had a great mind for the game," Kleine said in a recent interview. "He was very smart and detailed and organized.

"I thought he was a really good coach. I liked him. He had a good personality. He wasn't uptight. I really enjoyed him coaching me."

Before Rodgers began what became a 27-year NBA coaching tenure, he was an Arkansas assistant for Coach Lanny Van Eman in 1970-71.

At that time, basketball was not well supported at Arkansas, as Rodgers recalled in an August 1988 interview with the Arkansas Democrat after being promoted from an assistant with the Celtics to head coach.

Arkansas' recruiting budget was so tight, Rodgers said, that in order to save money he "used to take this chicken flight" to recruit.

"There was a booster who let us fly for free on a company plane that went from Springdale to Atlanta and back," Rodgers said in reference to Tyson Foods. "The plane was a DC-3. The pilot would sit up front and I'd sit in the back surrounded by all these little chickens peeping like crazy.

"It was strange, but it was an inexpensive way for us to get to Atlanta and recruit."

Arkansas was 5-21 in Rodgers' only season. That didn't stop Cleveland Cavaliers Coach Bill Fitch from offering Rodgers a job as an assistant coach with the NBA expansion team.

Rodgers had worked at North Dakota as an assistant coach when Fitch was the Fighting Sioux head coach and Jackson the team's star player. Despite the chance to coach in the NBA, Rodgers initially turned down Fitch's offer.

"My family liked Arkansas, and we had just moved into our house," Rodgers told the Democrat in 1988. "We didn't really want to make another move."

"It's not that I wanted Jimmy to leave, but Cleveland's offer represented a substantial raise," Van Eman told the Democrat in 1988. "I wanted Jimmy to do what was best for him and his family, and I thought that was for him to take the Cleveland job."

Rodgers eventually agreed with Van Eman and went to Cleveland.

"It wasn't easy leaving Arkansas, though," Rodgers said. "I felt we were building something good there."

The Razorbacks went 8-18 in Van Eman's second season, then 16-10 in his third season when he was voted Southwest Conference Coach of the Year. But the Razorbacks fell to 10-16 in Van Eman's fourth season, and he was replaced by Eddie Sutton.

"A lot of people think I was fired, but I resigned," Van Eman said. "I just felt like the program deserved more support from the administration, and I thought a new coach would have a better chance of getting that."

Rodgers and Van Eman, who met at Iowa in 1964 when Rodgers was the Hawkeyes' senior team captain for Coach Ralph Miller and Van Eman was an assistant coach, got back together again in Boston.

After Rodgers, a Celtics assistant for seven seasons, replaced K.C. Jones as head coach, he brought in Van Eman, who had been an assistant coach for Miller at Oregon State. Miller had just retired, so the timing to go to Boston was perfect for Van Eman.

"We've come a long way, baby," Rodgers said in 1988. "I think it shows that if you love the game and stay with it and keep working hard, good things will happen."

Unfortunately for Rodgers and Van Eman, not enough good things happened for them in Boston.

Bird played only the first six games of the 1988-89 season before having to undergo surgery for bone spurs in both feet. Without him, the Celtics struggled to a 42-40 record and were swept in the first round of the playoffs by the Detroit Pistons.

Bird was back the next season and the Celtics improved to 52-30, but they again were eliminated in the first round, 3-2 by the New York Knicks.

Boston blew a 2-0 series lead as the Knicks won both of the games in New York, then beat the Celtics 121-114 to end a 26-game losing streak in the Boston Garden. New York center Patrick Ewing scored 31 points in the game.

"It was that whole anything can happen in one game thing," said Kleine, a reserve for the Celtics at the time. "Ewing got hot, and we had to double-team him and they started knocking down threes and beat us handily."

It was the first time the Celtics had lost first-round playoff series in back-to-back years.

"In Boston, that ain't gonna cut it," Kleine said. "That's a tough place to coach, and when that happens you're in trouble."

Rodgers was fired two days after the series ended , and Van Eman was out as well.

"I'm telling you, man, Jimmy lost his job because of that first-round series loss to the Knicks," Kleine said. "That was all she wrote.

"When you've got Bird, McHale, Parrish and D.J., even though they're old, you can't blow a 2-0 lead in the first round of the playoffs. I felt bad for Jimmy."

Rodgers got another shot as an NBA head coach with the Minnesota Timberwolves, where he replaced Bill Musselman for the 1991-92 season.

Minnesota fired Musselman and his entire staff, including his son, Eric, who was an assistant with the Timberwolves and is now Arkansas' head coach.

Despite a coaching change that resulted in his father's firing, Eric Musselman praised Rodgers.

"Jimmy Rodgers was a great coach and very creative," Musselman said this week.

But Rodgers again struggled to win with the Timberwolves, who were in their third year of existence when he took over the team.

Rodgers went 15-67 in his first season with the Timberwolves, then was fired during his second season with Minnesota off to a 6-23 start.

After sitting out of coaching for a year, Rodgers was back in the NBA when Jackson hired him as an assistant coach on June 28, 1994.

Rodgers, who grew up in the Chicago suburb of Oak Park, was an assistant with six teams that won NBA championships -- three with the Celtics and three with the Bulls.

"My wife, Donna, and I have been thinking about this for a while," Rodgers told the Chicago Tribune. "We just wanted to step back from this whole thing and go on about our lives and do some other things.

"Basically, we wanted to spend some time together and see some people. We're going to follow that winding road. But I wouldn't rule out a return to coaching."

At a rally in Grant Park celebrating the Bulls' 1998 title, Jackson praised Rodgers.

"He's the guy who put it all together for our defense," Jackson said.

While Tex Winter, inventor of the Triangle Offense, was the best known of Jackson's assistants, Rodgers earned a reputation as a defensive specialist.

"This has been a spectacular run, a spectacular experience," Rodgers told the Tribune about his time with the Bulls. "I feel I contributed some. I'm not sure if I was a major contributor, but I got to work with great people and a great staff."

While Rodgers didn't win enough in Boston and Minnesota to hold onto those head coaching jobs, Kleine said there's no doubting his importance to Jackson and the Bulls.

"Having been with Boston during some of the Celtics' glory years and then having head coaching experience, Jimmy really added an important voice and opinion to the coaching staff in Chicago," Kleine said. "He had a good way of looking at things.

"Jimmy wasn't a yeller and a screamer and all that. He communicated very calmly. I think that was what Phil liked a lot about him, because that was Phil's style, too."