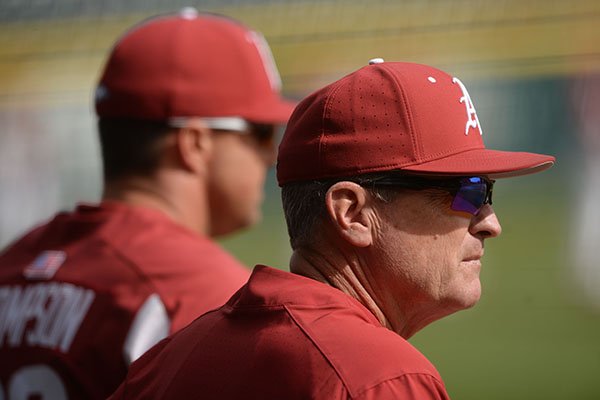 Arkansas coach Dave Van Horn is shown prior to a game against Illinois State on Tuesday, March 3, 2020, in Fayetteville.

FAYETTEVILLE — One of the biggest tasks for college baseball coaching staffs during the extended offseason will be how to effectively merge larger-than-normal rosters of existing players with incoming signing classes.

The confluence of two unprecedented baseball events - the NCAA’s decision to restore a year of eligibility to spring athletes whose season was cut short by the covid-19 outbreak, and MLB’s reported decision to shorten its amateur draft to five rounds - will leave college programs with bloated rosters that include players who were expected to go pro this year.

For a program like Arkansas, the list of highly-rated prospects on the 2021 roster could be extraordinarily long. The Razorbacks have five current players and eight signees on Baseball America’s list of the top 500 prospects this year. That list doesn’t take into account some draft-eligible players who likely would have gone pro in any other year.

“I have mixed emotions about it,” Arkansas coach Dave Van Horn said. “Selfishly, I’m like, ‘Wow, I get to keep a couple more kids,’ but on the other side I feel bad for some of the guys who were going to be a 12th rounder, a ninth rounder, if this all goes down. It sounds like it’s going to be five (rounds) and at the most it could be 10.”

Arkansas has 13 current players or signees listed in Baseball America’s ranking of the top 500 prospects in the 2020 MLB Draft.

*-Denotes high school player who has signed with the Razorbacks

MLB has not officially announced its plans for the draft, but multiple baseball insiders reported Friday that a five-round draft has been finalized and will be announced by the league soon. The draft is expected to begin June 10, as scheduled.

A five-round draft would limit the number of draftees to 160 this year, down from 1,217 in last year’s 40-round draft.

“A five-round draft is such a change from years past,” Van Horn said. “It’s going to send a few more kids to college, obviously, that are very, very talented. It’s going to keep some kids in our program for another year, and other programs. I just think the talent level in college baseball is going to be elevated. It’s going to be exciting for the fans. There will be a lot of competition.”

Arkansas is likely to lose outfielder Heston Kjerstad and shortstop Casey Martin, who are rated the Nos. 15 and 27 draft prospects, respectively, by Baseball America. Signing bonus values for those slots in the draft range from between $2.5 million and $3.8 million.

Whether they are drafted will likely depend on their sign-ability as pro teams are more likely to only draft players they feel they can sign this year.

“We kind of know who we have a chance to lose, and we know who we’d lose for sure,” Van Horn said.

“We’ve got a 2020 class we’re excited about and proud of,” said Nate Thompson, Arkansas’ recruiting coordinator and hitting coach. “We can’t wait for them to get here. We certainly hope we can keep all of them, but those players have to take a look at their options.

“That’s part of signing players of that caliber, (dealing) with the whole draft process.”

Van Horn said there are players in the signing class who could start for his team next spring.

“If kids can be patient…and turn down the money now and come to school for two and three years, they’re going to make a lot of money. You’re going to see a lot of our guys in the 2023 draft flying off the board the first day if they come to school. They’ll have a chance to grow up and I think we can coach them every bit as good as pro people.”

Once the draft is over, the challenge will be to cut down the roster size. Teams can carry extra players during the fall practice season, but must designate a 35-man roster for the regular season.

“I can tell you right now that there are none of the newcomers that we don’t want; we want them all,” Van Horn said of a 22-man signing class that will grow because some verbally-committed players have yet to sign. “When it all comes down, there might be one or two who decide, ‘Am I going to go to junior college, where I can pitch more? Am I going to do this or do that because Arkansas has got X-amount of guys?’

“I think we’ll be able to whittle it to where guys who have been in the program and maybe haven’t gotten to play or who were walk-ons that have already redshirted once or twice…maybe those guys need to make an adjustment where maybe this is their time to head off to a (junior college) or another four-year school that really needs them at those positions instead of coming (back to Arkansas) in the fall. Obviously by the end of the fall the roster will be whittled down.”

CORRECTION: A previous version of this story stated Arkansas had seven signees in the Baseball America top 500 prospects list. It has been corrected to state there are eight signees on the list.