Chadwick resigned to training in Texas 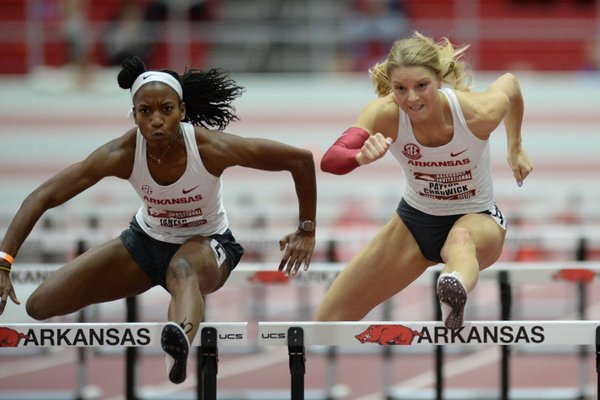 Former Arkansas standout Payton Chadwick (right), whose outdoor season ended two weeks before it even started because of the coronavirus pandemic, spends her days training in Paris, Texas, home of her husband Connor. (NWA Democrat-Gazette/Andy Shupe)

The opportunity to see other parts of the world and compete against top athletes is what attracted Payton Stumbaugh Chadwick to join the professional track and field ranks.

But these days, Paris is the only place the former Springdale Har-Ber and University of Arkansas standout gets to experience much these days.

That's the town in Texas and not the city in France, and it's the hometown of her husband Connor.

It's there that Chadwick can continue to work on her skills when other facilities are closed because of the coronavirus pandemic. Arkansas assistant coach Chris Johnson remains her coach and provides her with what she needs to do during this time.

"I am currently in Texas training and have access to facilities with strict precautions," Chadwick said. "My coach sends me workouts daily that I'm able to do on my own here in Texas."

Chadwick was scheduled to make her 2020 outdoor debut at the 93rd Clyde Littlefield Texas Relays in Austin, where she had run during her high school and college days. She would go from there to Grenada to compete, and she was later scheduled to compete in the U.S. Olympic Trials in Eugene, Ore.

Her indoor season ended with a second-place finish in the 60-meter hurdles at the USA Indoor Championships, and she had returned to Fayetteville to begin training as she transitioned from indoors to outdoors. The pandemic, however, put an end to her season two weeks before it even started, and eventually caused her to head to Texas to continue training when Arkansas shut down its facilities.

"I was running really well and really excited," Chadwick said. "The Texas Relays is one of my favorite places to run, and I was super pumped about Grenada because I have never been to the Caribbean, so that was going to be fun. From there, we weren't really sure where because the coronavirus stuff started happening, so we backed off. Now I don't even have a season.

"The first thing I thought was they were probably going to cancel the Olympics. I think pushing it back to 2021 was a good decision because athletes don't have access to facilities or tracks or weight rooms. Initially, I was a little upset because I was running well, but it is what it is. I just remain to stay positive and stay in shape."

Almost a month after she ran her last race as a Razorback, Chadwick made her professional debut July 7 in Bottrop, Germany. She went solo on her first trip overseas, and she wound up winning the 100 hurdles that day with a time of 12.88 seconds.

"It was a small German town, and it was super cute," she said. "They had a little market, and I went there about three times because I like to cook and they had things I had never seen before. It was a smaller meet, but I came out with a win.

"I was listening, and they were doing 'on your mark, set,' but it was in a different language. I thought to myself, 'Oh my gosh; this was crazy. I'm definitely not in America anymore.' I just had to adapt. I got to the line and watched what the other girls did. There wasn't much stress because I was just going to run fast. It was pretty crazy." 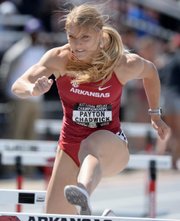 By Andy Shupe Former University of Arkansas track and field standout Payton Chadwick has been limited to training in Paris, Texas, after th... + Enlarge

Since that first meet, Chadwick has gone on to compete in Switzerland, France, Great Britain, Ireland, Croatia and Spain, as well as returning to the United States and competing in the USA Championships in Des Moines, Iowa. Most of her races have been in the 100 hurdles during that time, although she ran the 200 in the Cork City Games in Ireland and did both events during the Muller Grand Prix in Birmingham, Great Britain.

Chadwick ended her 2019 outdoor season on a high note when she ran a 12.88 again in the 100 hurdles and won that event during the Memorial Francisco Ramon Higueras in Andujar, Spain.

"Before going to Europe, I had never experienced jetlag," Chadwick said. "Jetlag is real, and you feel out of place because you can't speak the language. You have to figure out how to adapt, whether it's eating on a schedule or trying to get eight hours of sleep.

"It's tough but super fun, and I've met a lot of athletes. Some don't know great English, but we stay in touch, which is pretty cool. It's been a really cool experience to travel the world and do the things I have done. I've now been overseas four times after never being there before in my life, so it's pretty crazy."