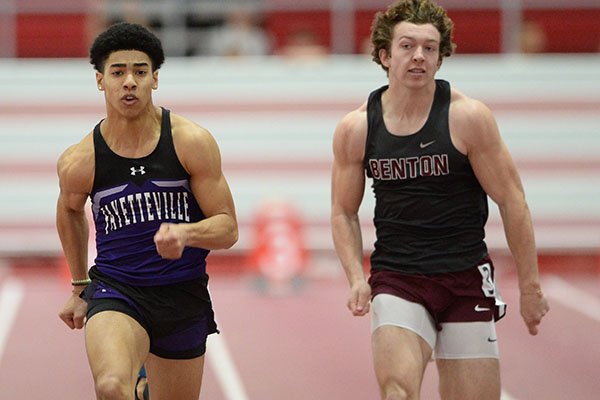 Isaiah Sategna (left) of Fayetteville leads Cade Clark of Benton Saturday, Feb. 29, 2020, in the 60 meters during the 5A/6A State Indoor Track and Field Championships in the Randal Tyson Track Center in Fayetteville.

Cade Clark had big plans for his final season of outdoor track and field at Benton.

After finishing third in the 200 meters at the Class 6A state track and field meet as a freshman and sophomore, the Benton sprinter suffered a right hamstring injury at last year's Class 5A state meet while running the 100 meters.

CHALK TALK Two-time state indoor champion in the 60 and 200 meters … Finished third in the 200 in the Class 6A state track and field meet in his freshman and sophomore seasons … Started at cornerback for Benton’s football team and had team-high six interceptions. Helped lead Panthers to the 6A-West Conference championship and an appearance in the Class 6A state championship game. … Will compete in track and field at the University of Arkansas.

Redemption was on Clark's mind as he wanted to win a state championship outdoors in his final season for the Panthers.

Unfortunately for Clark and other seniors across the state, their spring sports seasons were cut short by the coronavirus pandemic.

Benton boys track and field coach Justin Ray was disappointed when he learned the season was called off.

"You think about all the hard work and dedication they put in and the countless hours they worked," Ray said. "They worked their butts off from Christmas break to the time they had to go home."

Entering the 2019 outdoor state meet, Clark, who has signed with the University of Arkansas to compete in track and field, was hoping to break his personal record of 10.5 in the 100. In Arkansas, state records can only be set in a state championship meet or the Meet of Champs. Fred Rose of Texarkana holds the 100 overall record with a 10.52, and Terrium Cobb of Magnolia owns the Class 5A record with a 10.63.

But in preliminaries for the 100 in the state meet at Lake Hamilton, Clark had to pull up with a torn hamstring. His quests for a state championship and a state record were over.

Clark rebounded from his hamstring injury and was healthy for the 2019 football season for Benton. He had a team-high six interceptions, helping the Panthers win the 6A-West Conference title and reaching the Class 6A state championship game.

The performance Clark had in the indoor championships at Arkansas' Randal Tyson Track Center in Fayetteville gave Ray a reason to believe the best was to come for one of his senior leaders.

"He was on a path to go faster," Ray said. "He was getting healthier and stronger. He was about to set more personal records.

"Come late April, early May, there's no telling what the kid could have done."

Clark didn't get that chance, however.

"It's tough," Clark said. "There's nothing you could have done."

Having a senior year end suddenly wasn't just about athletics for Clark.

Seniors at Benton, Clark said, looked forward to three things -- senior games (a combination of academic and athletic activities), the prom and graduation. Clark said Benton's senior class had raised $27,000 for their prom, which was originally scheduled for April 18, then rescheduled for Saturday.

Not being in the classroom has been different, Clark said.

"You don't realize how much you miss school until you're not in class," Clark said. "You're doing online classes."

Track and field wasn't always Clark's top sport. Instead, Clark originally wanted to be a baseball player at Benton.

But rather than shining on the diamond, Clark became one of the school's greatest track and field athletes.

Clark finished third in the 200 with a 23.0 as a ninth-grader, which led him to shift his focus to the sport more.

"I realized I should be taking track more seriously," Clark said. "I was getting a lot better at it."

Ray said Clark was passionate about baseball. But track and field won him over.

"He started to have success," Ray said. "We pulled him up as a ninth-grader. All of a sudden, he was third overall at state. It was an eye-opening experience for him.

"In a span of 365 days, he went from wanting to be a big-time baseball player to, oh wait, I run track now."

The success on the track led Clark to signing with Arkansas, which has been one of the top track and field programs in the country. Clark chose the Razorbacks over Arkansas State University, Ole Miss and Princeton.

"If I'm not going to play baseball, then I'm going to run track for the Hogs," Clark said. "I was thrilled. It's a complete honor to be on the team."

As for his major at Arkansas, Clark said he is undeclared but has expressed an interest in business and engineering.

Clark was a part of two Benton football teams that reached the state championship game as well as competing in the state track and field meets.

The time he spent at Benton as a student and as an athlete is one he'll always cherish, he said.

"I loved it," Clark said. "I couldn't have asked for a better experience."