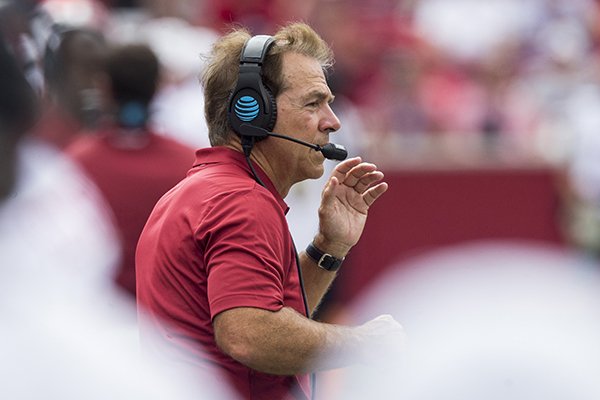 LITTLE ROCK — Rereading a months-old email from an avid, well informed and most importantly, honest Alabama loyalist elevated the Crimson Tide to elite status in the annual exercise wagering Monopoly money on the over-under number for wins by SEC teams.

Until the review, there was sufficient confidence in Alabama, Florida and Texas A&M for each to merit a $20 wager, but with a hint of doubt that is a stop sign regarding the $30 max.

Included in a desktop file, the communique documented surprises at linebacker — All-American Dylan Moses deciding to come back for his senior season and Joshua McMillon getting a sixth year — and summed up expectations for the Crimson Tide defense with the unit “may not be up to the 2011 class where all 11 starters had NFL careers, but it should be salty …”

Considering Alabama’s only 2019 losses were close and occurred when eventual national champion LSU scored 46 and Auburn 48, his words prompted the self-imposed limit on the Crimson Tide to go over 10.5 victories. Prior to that, supporting the over was based pretty much on BetOnLine favoring the Crimson Tide in all 12 games.

Quarterback Tua Tagovaila will be missed, but his replacement will do fine with Heisman Trophy candidate Najee Harris at running back and Steve Sarkisian calling plays for the second year in a row — the first time since the 2015 offseason that Alabama’s offensive coordinator has been around more than one year.

Each of the first three years in this for-fun venture, winning a majority of the $30 wagers helped produce a profit, but over 7.5 for Texas A&M and under 10.5 for Georgia were losers, and the 2019 bottom line was red.

Before addressing the Bulldogs and the Aggies, taking a stand on Arkansas going over 3.5 victories is a must. Only a couple of weeks ago, 4.5 was the personal line on the Razorbacks supported by the conclusion that Arkansas would be 3-1 in the nonconference — Notre Dame’s number is 9.5, Nevada’s is 6.5, Louisiana-Monroe’s is 3.5 and Charleston Southern is an FCS member — and end its SEC losing streak.

Therefore, the wager is $20 on the Razorbacks.

Also at 3.5, Vanderbilt was the only other SEC school under 5.5 and the play is $10 on the under since the Commodores don’t figure to win a conference game and their best nonconference opponent, Kansas State, was 8-5 in the first year under Chris Klieman.

Georgia takes on both Alabama and Auburn from the West, and there is no way playing Virginia and East Tennessee prepares transfer quarterback Jamie Newman for an SEC debut vs. the Crimson Tide. In addition, Florida quarterback Kyle Trask is preferred over Newman at this point.

Convinced Jimbo Fisher would quickly transform the Aggies into a West Division contender, A&M losing to all five of its quality opponents in 2019 was unexpected. The Aggies will sweep East division opponents South Carolina and Vanderbilt this fall and get to 10 if they can beat Auburn or Alabama or LSU. Even though quarterback Kellen Mond’s so-so outings in the 2019 losses are a concern, winning one of three is doable.

A brief look at the hypothetical wager on the other SEC teams starting with an Arkansas opponent that should continue to progress in the third year under Jeremy Pruitt:

—Tennessee, 7.5, $10 over. Although unlikely to beat Oklahoma, Georgia, Florida or Alabama, there is no reason the Vols won’t win the other eight.

—Auburn, 8.5, $10 under. The Tigers must navigate two difficult stretches — Kentucky-Georgia-A&M in October and LSU-Alabama in the final two weeks.

—Kentucky, 6.5, $10 over. Eighth-year coach Mark Stoops has led the Wildcats to four straight bowl games and the return of former starting quarterback Terry Wilson is another plus.

—Mississippi State, 6.5, $10 over. No reason other than the mad genius of Mike Leach.

—Ole Miss, 5.5, $10 under. The Rebels’ perseverance will be tested after a five-week stretch that includes Auburn, LSU, Alabama and Florida. The Nov. 14 game in Fayetteville is the key to six wins.

—South Carolina, 5.5, over $10. Sophomore quarterback Ryan Hilinski should improve under new offensive coordinator Mike Bobo who was in charge at Georgia when the Bulldogs scored 30 or more in 57 of 92 games.