Richardson a maestro when holding court 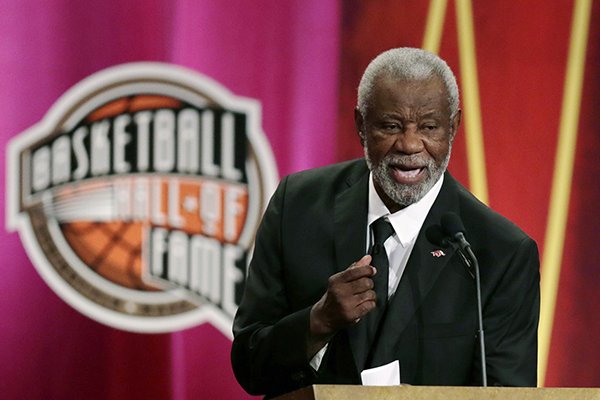 Former University of Arkansas head coach Nolan Richardson addresses a gathering during his enshrinement ceremony for the Basketball Hall of Fame in Springfield, Mass., Friday, Aug. 8, 2014. Richardson led Arkansas to the 1994 National Championship and to three Final Four appearances in 1990. 1994 and 1995. (AP Photo/Charles Krupa)

Some people can speak for five minutes and it feels like an hour.

Some people can speak for an hour and it feels like five minutes.

Nolan Richardson is in the latter category.

You won't be disappointed.

Richardson's ability to hold the attention of a crowd -- even a concert hall of the basketball greats -- was on full display in Springfield, Mass., on the night of Aug. 8, 2014.

That's when Richardson, who led the University of Arkansas to a school-record 389 victories, highlighted by the 1994 national championship, was inducted into the Naismith Memorial Basketball Hall of Fame.

It was the 11th or 12th or 13th Hall of Fame -- it's easy to lose count -- to which Richardson had been inducted, but as he said, the Naismith Hall of Fame is the "grandfather of them all."

Gary Williams, who had success at several colleges and led Maryland to the national title in 2002, spoke before Richardson. He did a nice job, drew a couple of laughs, and talked for a little over 21 minutes.

It seemed like a lot longer while watching Williams' speech live on NBA TV.

Then came Richardson. He spoke for more than 30 minutes, which was twice as long as David Stern, the longtime NBA commissioner. But Richardson's time on stage flew by, and the crowd at the Springfield Symphony Hall laughed and clapped throughout his talk.

A particularly funny story Richardson told was about driving one night and listening to a game between Indiana State -- led by Larry Bird -- and New Mexico State.

Richardson said he kept hearing the broadcaster call out Bird's name for making a spectacular shot, pass or steal.

It was the first time Richardson had ever heard of Bird, who led Indiana State to the 1979 national championship game where the Sycamores lost to Michigan State and Magic Johnson. Bird and Johnson then became NBA stars and were inducted into the Naismith Hall of Fame.

"I can't see it, but I'm just trying to imagine it," Richardson said of what he was hearing about the plays Bird made as he listened to the game. "By the time I got to the inn, I said, 'Damn, that brother can play!' "

That line drew huge laughs, and the camera at the Hall of Fame ceremony focused on Bird and Johnson cracking up in the audience.

Bird, of course, is white.

"When I got the newspaper the next morning and saw Larry's picture, I said, 'Damn!' " said Richardson, drawing more laughs.

Richardson then spoke directly to Bird and Johnson.

"Larry, you're my favorite player," Richardson said. "I love you, too, Magic. But not as much as I love Bird."

Richardson then talked about what it meant to join Bird and Johnson in the Naismith Hall of Fame.

Richardson also told a story about how the devil wanted his team in hell to play a team from heaven put together by God.

"God said, 'Do you know who I have up here? And you still want to play a game?' " said Richardson, referencing all the basketball greats who had passed away and were now in heaven "The devil said, 'Yeah.'

"God said, 'What makes you so strong?' The devil said, 'All the officials are down here.' "

Can't remember who followed Richardson among the inductees to speak that night, but that person had a tough act to follow.