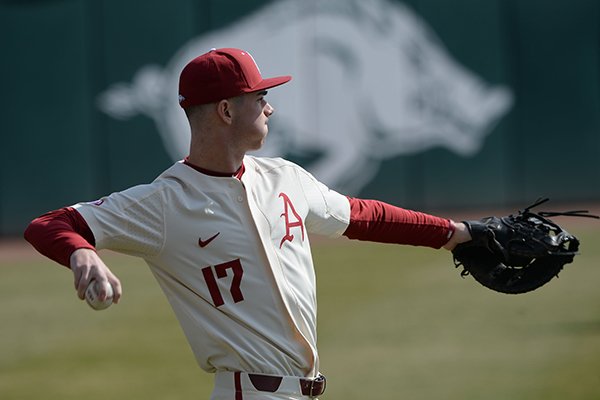 Arkansas infielder Jesse Pierce warms up Thursday, Feb. 20, 2020, before the start of the Hogs' 7-5 win over Gonzaga at Baum-Walker Stadium.

FAYETTEVILLE — Arkansas infielder Jesse Pierce has entered the NCAA’s transfer portal after a partial freshman season with the Razorbacks.

Pierce was signed out of Arbor View High School in Las Vegas and Perfect Game rated him the best player in Nevada in the 2019 senior class.

During the fall and preseason, Pierce practiced at multiple infield positions for the Razorbacks. He was on the team’s 35-man roster for the regular season, but was likely to redshirt unless an injury pressed him into playing time.

Arkansas has had three players enter the transfer portal this offseason. Neither right-handed pitchers Collin Taylor nor Travis Hester have announced a transfer destination.