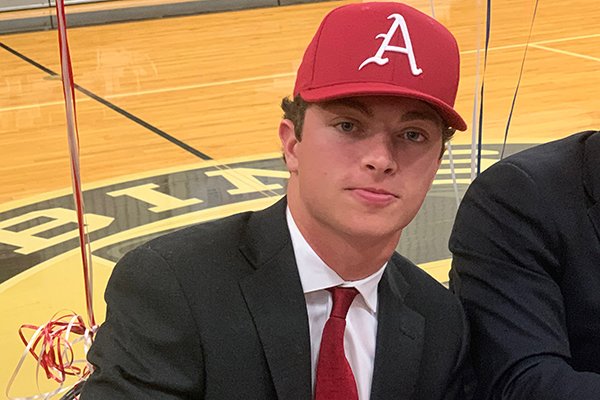 Zac White of Joe T. Robinson signs a letter to play baseball for Arkansas during a ceremony in Little Rock.

Injuries robbed Zac White of opportunities to play summer baseball, and a global pandemic denied him of a chance to win a state championship during his senior season at Joe T. Robinson.

But neither event dented White's confidence, a trait that should come in handy next season with the University of Arkansas baseball team.

CHALK TALK Committed to the University of Arkansas in August. … Collected 40 hits and had a slugging percentage of .898 while stealing 24 bases as a junior. … Several other family members have attended Arkansas. His father David played golf while his brother, John David, is currently a wide receiver for the Razorbacks. White’s great-grandfather, Harold Rees, his grandfather, John Rees, and uncle, John Aaron Rees, all played football at Arkansas.

"I'm going to compete and give it all I've got no matter what the situation is," the 6-1, 175-pound shortstop said. "I have a lot of confidence in myself and in my ability, so I try not to worry about expectations as it pertains to baseball. I just try to stay prepared and stay ready for anything that comes my way."

Staying ready has been the essence of White's psyche on the diamond, and it's a key reason why the all-state standout was able to bounce back from the type of setbacks that could crush a player's mental state and make himself a top recruit.

White dealt with injuries, particularly a torn labrum, early in his career, which limited his availability to participate in any baseball during the summer playing months. He did manage to rebound from those ailments to put together a strong campaign by the time he became a junior.

"The biggest thing is how athletic he is," Robinson Coach Isaac Dulaney said of White, who hit .506 with 33 RBI, 41 runs scored and 4 home runs in 2019. "Baseball is obviously a skill sport, and athleticism is not as required as it is in a lot of the other sports that we play. It does take a lot of time to develop the skill, but there were just moments in games and in practices where you realize that you don't get to coach a lot of people who can just do that like he can.

"Zac's as strong as he can be, runs a 6.6 in 60. There's so much in him, from a fast-twitch standpoint, that you just can't coach. He puts countless hours into what he does, and when you multiply that with his natural athletic ability ... there's a reason why I called [Arkansas baseball Coach] Dave Van Horn and told him he needed to see the kid."

Dulaney was looking for even bigger things out of White in 2020, but a broken foot early in the summer put a scare into that idea. The injury eventually healed, and that enabled White to play a condensed stint with the Arkansas Prospects organization. White would later attend a showcase event at the Arkansas in August, which is when Van Horn got a chance to witness his skills up close.

"It's exciting because a year ago, nobody knew who Zac was," Dulaney explained. "We kind of got started with his recruiting in January of last year. We reached out and called some people, and of course, they all kind of told us to the same thing, which was to see if we could get him to come to their camps or to shoot them a schedule so they could possibly come watch him play.

"But then all of sudden, we got about halfway through the season, and some people started to get interested. When we went up to the showcase at Arkansas, Van Horn basically made the statement that Zac was going to be a Razorback, and they were gonna do whatever they had to to make that happen."

Arkansas extended an offer, and White committed to the Razorbacks shortly thereafter. By doing so, it also allowed him to turn his attention to a season that the Senators had been pointing toward for four years.

Dulaney said that when he arrived at Robinson seven years ago, the team was essentially considered an easy victory for opposing teams.

"We were the laughingstock of Little Rock," he said. "Everybody wanted to play us. We got run-ruled, and all of that stuff. We really just kind of did what we could with what we had at the time, but we knew that the senior class coming up would be pretty good.

"We really just devoted everything we had into building this program around them."

The Senators, who went 24-7 and advanced to the Class 4A state playoffs last season, had eight seniors on this year's roster, six of whom have signed to play collegiately next season. With White on board with Arkansas, Luke Pectol is set to play for the University of Kentucky and Gavin Glasgow is bound for Brigham Young. K.J. Merriweather and Justin Nelson have signed with the University of Arkansas at Pine Bluff, while Luke Jones is headed to Ouachita Baptist.

In addition to those six, junior Andrew Pickering has received a scholarship offer from San Jacinto (Texas) Junior College.

"It's the No. 1 junior college in the country, and it's where [current Razorback] Matt Goodheart went," Dulaney mentioned. "I've got a lefty [Brett Gastman], who went 9-1 as a sophomore and beat Conway in the first game of the season, that will end up signing next year, too. We were loaded and had a ton of talent."

White led the Senators to a 6-1 start, including three victories over Pulaski Academy, but that was as far as he'd take them. The coronavirus put an end to the rest of the season, a thought that still lingers with the Arkansas signee.

"It's one of those things where you don't realize how important it is to you until it's gone," he said. "It was really disappointing for me because we felt like this was our year. We were very confident going into the season. We did 6 a.m. workouts all fall and winter to get ready for it.

"We're a close team, and we were prepared. It was just unfortunate that we didn't get to show off what we'd been working so hard for."

The hard work, however, hasn't stopped for White. He's continued to get in workouts with Glasgow and others while awaiting a time frame for him to arrive in Fayetteville. He said he's not sure what to expect once he joins the team, but he'll be up for it just the same.

"I'm friends with a few guys up there, and I've heard about what goes on," he said. "At the end of the day, I know I'm going to face a lot of good competition that will help raise my game. I'm gonna learn from a bunch of guys that are older than me. But I'm going to compete regardless.

"On the Arkansas Prospects summer team that I played with, every starter is going to play Division I baseball so I've gotten some good experience with them. For me, my biggest adjustment will be seeing that high-level play every day, seeing that 95 mph-plus pitching. But I'll be ready for it."

Dulaney also is confident that White will be able to hold his on at the next level.

"He's exactly that kind of player Van Horn looks for," he stated. "He's one of the toughest kids I've ever coached physically and mentally, and his work ethic is unmatched. When you get to the SEC, it doesn't matter how good you are because everybody is good.

"But he's going to work, contend and push some people. He's got everything you would look for in an SEC baseball player."