Before they were coaches: Dave Van Horn and Matt Hobbs 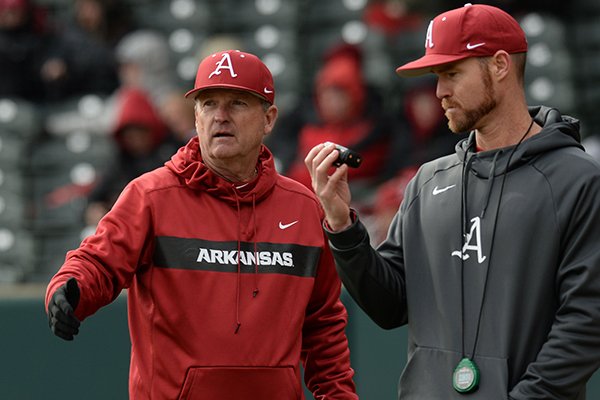 Made up of four baseball fields backed up to one another and one larger stadium roughly 50 yards away, the complex was not only where Arkansas’ longtime baseball coach played games in the summer sun when he was 13-15 years old, it was the site of his first job.

It was a seven-days-a-week gig and it started prior to the summer baseball season getting underway. For two consecutive months each year, Van Horn would show up to work at 7 a.m.

His task was ensuring the fields were in great playing condition.

“We hosed down the concrete, lined the field, made sure it was pretty every day,” Van Horn told WholeHogSports. “It was hot. It was a great experience. You had to get out of bed and you had to go.

“We cleaned those stadiums and we dragged those fields and I think one man came and mowed them, but most of the infields back then were all dirt. We had to water and drag them. A lot of times you’d go back home, take a shower and go back and play that night – a lot of days. I basically lived out there for three summers in a row.”

Van Horn said he was paid $700-800 at the end of each month. He thought he was rich. The money he made in the Missouri heat helped him buy his first car ahead of his 16th birthday.

But before he had a vehicle of his own, Van Horn was forced to get creative in how he got to the baseball fields. His hometown of Grandview, Mo., was 7-8 miles away.

“Sometimes it was hitchhiking, sometimes it was walking,” he said. “I think the last year when I was 15 I got to drive a vehicle there, whether it was a motorcycle or a car.

Van Horn learned a lot about hard work on his first job. It is one of the reasons for his blue-collar work ethic.

“If you see something that needs to be done at the field, you just do it,” he said. “I tell the players that. If they’re stretching before practice and we’ve already done some pre-practice work and I don’t think the area is right and no one is around, we don’t want to upset anybody or any of the grounds people. We’ll grab a rake, we’ll fix home plate between innings.

“It doesn’t matter what it says next to your name - head coach, volunteer coach or graduate assistant. If you do it, people realize, hey, that’s the way you do it. I just think it’s the way it should be done. It’s not phony with me. It just feels right.”

According to Matt Hobbs, the state of California was phasing out physical education as part of schools’ curriculum when he joined the workforce toward the end of his teenage years.

After landing a job folding towels at a gym, Hobbs quickly worked his way into becoming its youth sports director. In that position, he traveled from school to school teaching remote PE classes to 1st-6th graders.

“I enjoyed the heck out of it.”